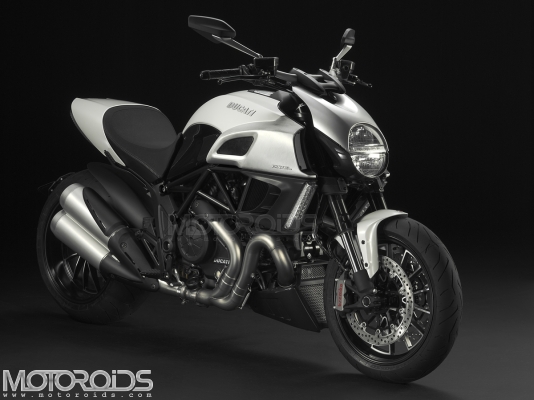 The 2010 EICMA, as expected, has played host to the unveiling of the 2011 Ducati Diavel ‘drag cruiser’ or ‘hyper street bike’ – which ever way you like to call it. The Diavel as we have seen repeatedly in the spy shots, comes across as a brute machine which means serious business. First time for a Ducati, the Diavel uses laterally mounted indicators (front and back) and side mounted radiators for efficient cooling while keeping the front end design, clean. The radiators are covered by aerodynamic ducts that help suck in air and also hold the Diavel badging. Though it looks stunning to us, the Ducasti are said to have been put off by the Diavel’s large dimensions, especially the 240-section rear tyre and speculations are already rife that this machine might not handle the way a typical Ducati does. But Ducati has been quick to react and says that even with the large rear tyre, the Diavel still maintains the the characteristic handling etiquettes of a hardcore Ducati.

Ducati’s exact words are, “Merging the worlds of power and style has never been achieved with such convincing precision. A specially engineered 240 section rear tyre combined with famous Ducati chassis technology serves up mind-blowing handling and lean angles which defy the laws of physics, whether carving through curves on your favourite road or just riding out for a night on the town.”

So lets talk more in depth about the Ducati Diavel. The Diavel is powered by a 1200cc, 162hp, Testastretta 11º  V-twin powerplant that puts out 127 Nm of torque. Tech jazz comes in the form of keyless ignition, traction control, ride-by-wire, three riding modes, ABS, split dash (as seen in the video) etc. The Diavel will be availalbe in two varaints – the base plain Jane version and the top of the line ‘Carbon’ version.

As the name suggests, the Carbon variant gets oodles of carbonfibre to reduce weight. Further kilos of shed off by the forged Marchesini wheels. Overall, these elements make the Diavel Carbon lighter by over 3 kilos. The Carbon variant also gets shiny, diamond smooth Marzocchi forks which makes the Diavel even more exotic. The Diavel and the Diavel Cabon get the entire electronics package mentioned above. The Carbon variant comes in two colours – Carbon Red and Carbon Black, wherein the coloured part is only the trellis frame and the centre panel on the fuel tank.

Another highlight of the Diavel is the split instrumentation shown in the video. One part of the console in mounted on the handlebars which displays the usual information like speed, trip, revs, temperature, time etc. along with the tell tale lights. The second part is mounted on the tank, which is responsible for showing other info like selected riding mode, traction control settings, gear selection etc. Another highlight of this tank mounted console is the TFT screen, which senses the ambient light and accordingly inverts the display colours to aid visibility during the day or night.