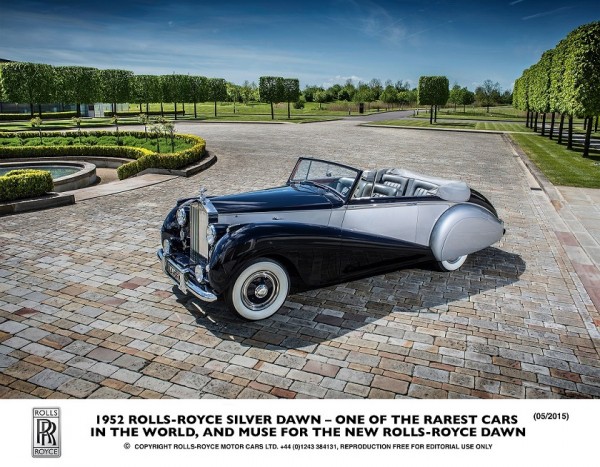 Rolls-Royce Motor Cars today announced the name of its forthcoming new car, to be known as Rolls-Royce Dawn. The car, a “drophead” (convertible in Rolls speak), was unveiled to representatives of the marque’s 130-strong global dealer network at the 2015 Rolls-Royce World Dealer Conference in Los Angeles, California.

As explained by Paul Harris, Regional Director of Rolls-Royce Motor Cars, Asia Pacific, “Rolls-Royce Dawn is a totally new car, designed from the ground up. It is the most social full four seat open-top super luxury motor car for customers who wish to bathe in the sunlight of the world’s most exclusive social hotspots. Rolls-Royce Dawn will also be the quietest soft-top ever made, and equally as quiet as a Wraith. Its roof will also offer a number of innovations which will be revealed in due course.”

The Dawn name was first used by Rolls-Royce in 1949,  but only ever applied to 28 very special drophead bodies between 1950 and 1954. The original Silver Dawn was also the first Rolls-Royce to be offered with a factory-built body, but the drophead that carried the name Dawn continued to be coach-built for individual customers.

The new Rolls-Royce Dawn will launch during the first quarter of 2016. It will essentially be a Wraith convertible with a canvas top, while being powered by the same 6.6-liter, 624 hp, twin-turbocharged V12.