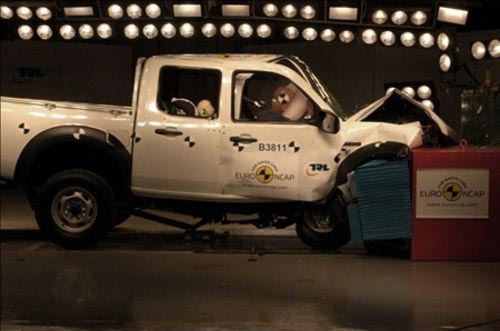 Ford’s new generation of Ranger is the first pick-up truck tested by the famous Euro-NCAP safety organization to achieve a a full five-star rating. The Ranger’s overall score in the test is a good 89%, which is now not just holds not just the best ever record by a pickup, but also is among the highest regardless of segment.

To put things in perspective, we would like to mention that a modern hatchback  that the Suzuki A Star is, managed to obtain 3 out of 5 stars in the similar test and this not at all states that A Star is not a safe car.

Not satisfied with making new records, the  pickup also managed to receive the best rating ever for pedestrian protection among all the cars to be ever tested by the Euro NCAP with 81% score. What surprises even more is that this Ford is a full blown Pick-Up.

Euro NCAP’s secretary general Michiel van Ratingen, commented: “With such good pedestrian protection, the Ford Ranger is undoubtedly raising the bar of safety in the category of pickup trucks, which had until now not proven to be the safest.”

Ford’s chief engineer for Asia Pacific and Africa, Adam Frost, said: “On the all-new Ranger we did more crash simulations than any of our prior programs to ensure that all parts of the vehicle’s safety were optimized.”

It is to be noted that Ford’s engineers had started with simulating more than 9,000 virtual crashes (!!) to optimize the Ranger’s structure and safety system. Then, 110 actual crash tests and 410 system sled tests were done with actual prototypes. The effort appears to have been very rewarding.

The highly commendable pedestrian protection result is most probably the result of energy-absorbing materials in the front bumper and also the new, “hexageneous” under-bonnet structure that works for reducing the chances of a pedestrian head injury.

Ford surely seems to have worked over-time on the development of their new Ranger. And how we wish that an all new Endeavor is spawned out of this very version of the pick up truck from Ford.