The next generation, new Mahindra Scorpio launch is slated for the 25th of September. Bookings have also commenced from today, although it is for existing Scorpio owners only. 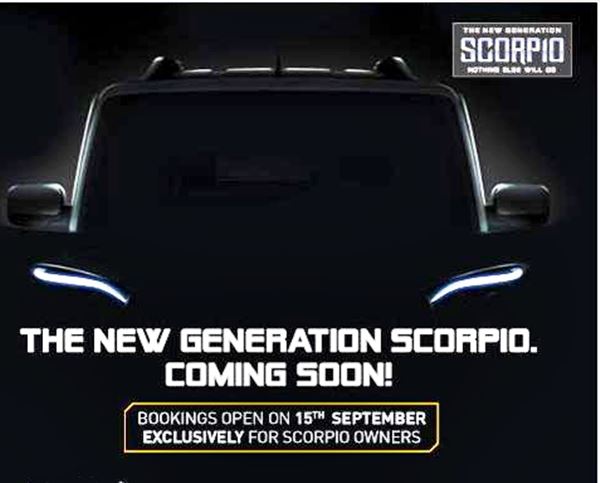 In a teaser released by Mahindra, the new face-lifted Scorpio show itself for the first time. Although not much has been revealed apart from the new DRL glow pattern, the new model, code-named the W105,  will carry a host of changes over the last one, which includes updated styling, brand new interiors with cool, new features and improved refinement levels all around.

The engine is a carryover from the previous Scorpio so the 2.2-litre mHawk turbo-diesel which delivers 120bhp and 29.57kgm of torque stays. However, the gearbox is all-new and the Scorpio will debut with M&M’s newly developed 320MT five-speed transmission which promises to be a much better shifting unit than before.

The updated Scorpio is expected to be dearer by Rs. 30,000 compared the outgoing model.

For more details on what’s new on the face-lifted Scorpio, click here.