Home Ford New Ford Fiesta first impressions, and everything else you wanted to know 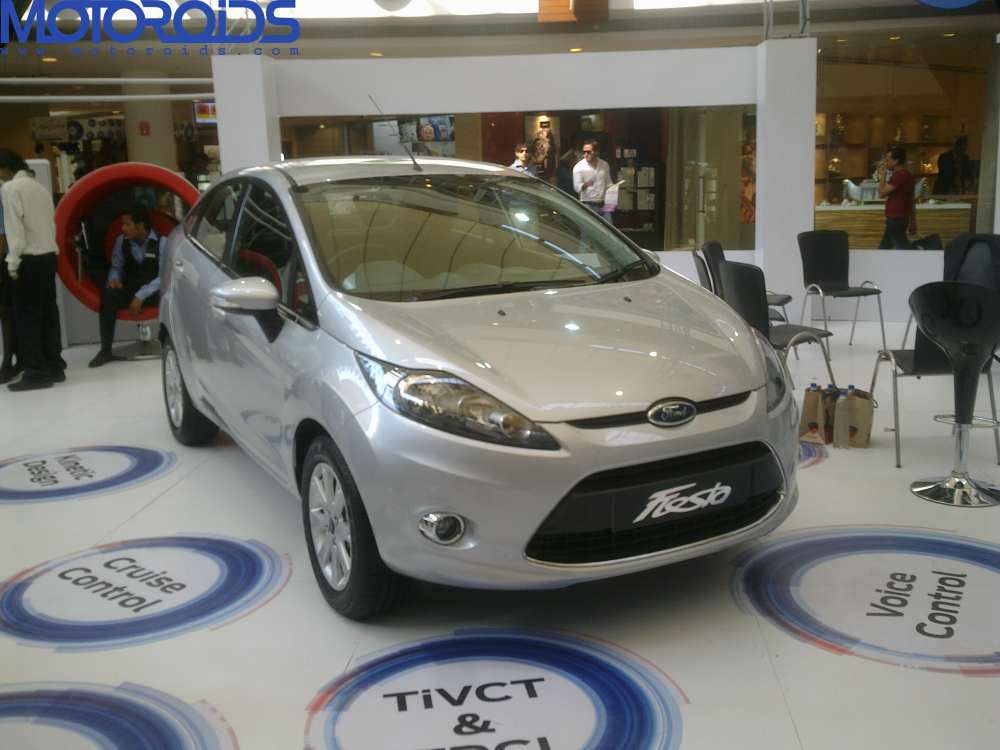 As we informed you earlier, we were at the unveiling of Ford’s new Fiesta in Delhi. Although the company didn’t reveal the price of the car or the specifics about the engines, it was sufficiently clear with the brief that the new Fiesta is designed around the driver, and is not joining the rat race to appease the good old family man. Ford is tagging the new sedan as a ‘premium’ offering, which hints at a ‘premium’ pricing when the car is officially launched in the next 1-3 months.

Look’s quite sporty from the front, doesn’t it?
Ford India’s President and MD, Michael Boneham, along with the top guy at marketing, Nigel Wark insisted that the Fiesta has been built keeping in mind the young at heart who love to drive. According yto the management duo, more than anything the new car will redefine the dynamic ability and the fun-to-drive factor in its segment. The earlier, Fiesta (now the Fiesta Classic) was itself was the best driver’s car this side of Rs 10 lakh, and the new car, according to9 the company officials, will take thr driving pleasure to a new level altogether. Now that’s quite a tall claim to make, we hope Ford India lives up to it. The front driver’s seats are almost like those racing Recaro buckets though, with incredible amounts of support from that side bolstering. the driver and front passenger’s seats wrap the occupants around and put them into ‘enthusiast’ mode right from the word go.
When we questioned Mr Boneham about the relatively less airy and not so expansive back bench, he again cited the focus on the driver. When we questioned him whether a product that doesn’t focus on the confort and space at the back seat work in a country like India, his reply was “our decision is based on extensive market research that Mr Wark and his team has conducted throughout India. There is indeed a big market for cars in this segment which are fun to drive and make the driver happy.” While we were apprehensive about the possibility of such a driver-centric product doing well in terms of volumes, the skepticism was laid to rest with a rather frank statement by the MD. According to him, the Fiesta is not meant to very large volumes, it is targeting a certain niche, and as long as it succeeds in meeting that target, it would be a successful product in Ford’s eye. Now that’s really rational. To expect the Fiesta to take the fight to the Honda Citys of the world in terms of numbers would have been asking for a little too much. Then gain, if the Fiesta, with its unique character unlocks the floodgates of sales, it would have recreated the magic of Fiesta all over again for Ford India. The unveiling of the car met with resounding a resounding ‘wow!’ by the public overlooking the ‘Fiesta Cafe’ from various levels of the mall.

The Fiesta is a nice looking car. It’s well proportioned and looks very aggressive and dynamic from the front. The triple barrel treatment given to the elongated headlamps really works in favour of the car’s sporty character. It’s reasonably big, but one would instantly consider it to be slightly smaller than the City and the Vento. It’s decidedly more youthful looking than the other two though. The rear and too is well proportioned and look nice, not as sporty as the front end though.

The Fiesta will pack in quite a few unique features for its class. Here’s a list

Tail-lamps not as fancy as the headlamp unit

1. The back seat space isn’t the best in class, in fact it’s quite cramped
2. The quality of plastics, especially in the door panels isn’t too great

A lot will depend on the pricing of the new car. It’s looking like a good product, but if Ford price the new Fiesta too optimistically, it would not click. We are a little worried about the usage of the word ‘premium’ a little too often by the Ford management. The new Fiesta looks like one hell of a promising car for the driving aficionados, if it really handles the way the company’s top management claims it to.

Hope to get our hands behind the wheel of this baby soon, and bring a detailed road review. Stay tuned..