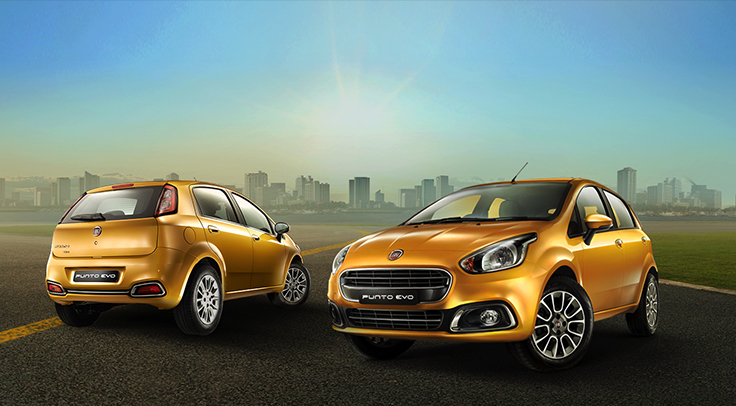 Alongside the new Fiat Linea 125 S, Fiat Chrysler Automobiles India (FCA) has also launched the new Punto EVO PowerTech and Avventura PowerTech range, which will now be offered with more powerful engines and a touch screen infotainment system with navigation, across all trims. The PowerTech series starts at INR 6.81 lakh for the Fiat Punto EVO and INR 7.87 lakh for the Fiat Avventura (all mentioned prices are ex-showroom, New Delhi).

Both the Punto EVO, as well as the Avventura will now be offered with the 93 PS 1.3-litre Multijet engine and the 5-inch multi-functional touch screen infotainment system with navigation across all variants. The 5-inch touch screen, multi-functional infotainment system with navigation consists of features such as Bluetooth, Capacitive (soft-touch) touch screen, SD card facility, USB-enabled, navigation from ‘Map My India’ and rear view camera capability. Branded as ‘PowerTech’ both Punto EVO and Avventura will be available in three progressive trims – Active, Dynamic and Emotion.

Mr. Kevin Flynn, President and Managing Director, FCA India said, “FIAT cars are known for their performance and by adding more horsepower to our model range we are only living up to our brand promise ‘Crafted for Car Lovers’. Besides that we do make great-looking cars. Though our strengths are performance and visual aesthetics, we do recognise the necessity of fuel efficiency, and our engines have been tuned to uncompromisingly deliver on that front. Over the years our cars have transformed customers into enthusiasts and that is because we build products that make their commute more delightful and safe instead of one that is merely functional.”