As I stood there somewhere in Hyderabad, a mean looking, Night-Hawkish thing appeared in the horizon. It was approaching towards me in style, kicking some dust in its wake and had a robotic glint in its eyes. Moments later, I was staring at the all-new Honda Accord Hybrid, which has landed on our shores as a CBU, aiming to attract premium plugs in its electrical socket. We switched it on for a very brief time and allowed a few pleasant electric waves to run through our body, here’s an account of the after effects.

Honda Accord Hybrid Design and styling

The New-gen Honda Accord still retains its low, flat and wide silhouette. Only this time, some sharp creases, new age illumination bits and that deckered boot lip, all come together to make the design appear more intense, sporty and likeably dynamic. Which is a great thing, considering that the new Honda Accord is still a lengthy sedan by all means. 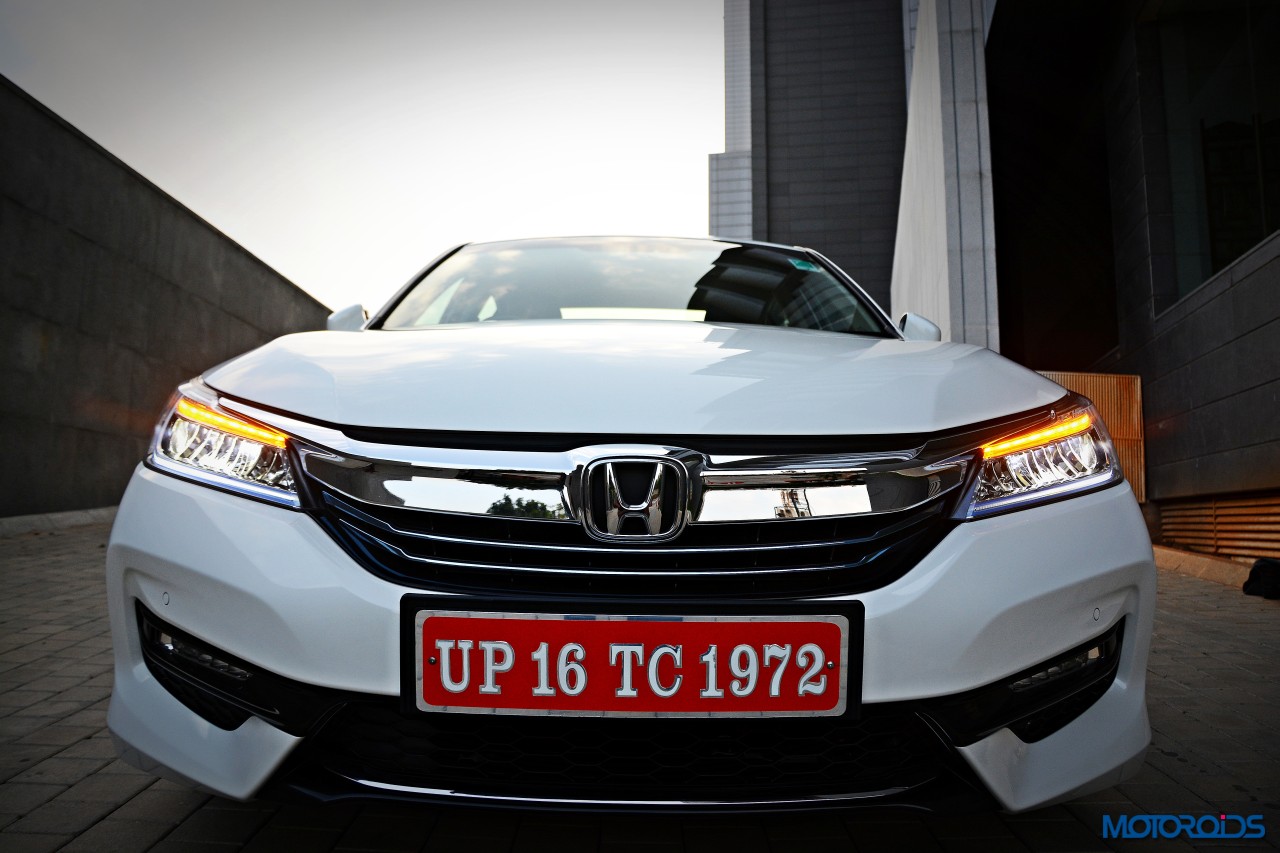 Up front, the trademark Honda grille takes centrestage, below which, twin chrome slats, mildly dyed in blue, put up a smile. 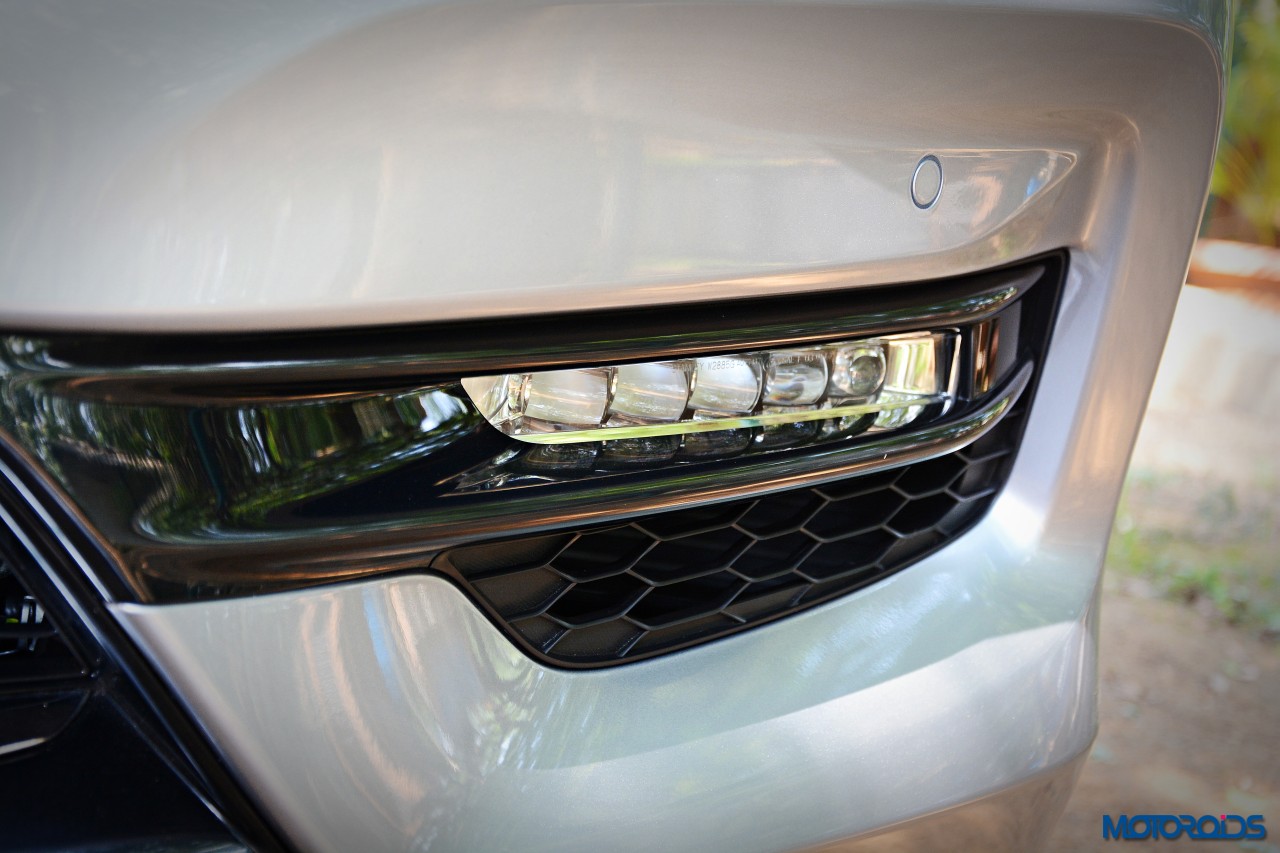 A large air dam gets chrome lining on the lower lip, flanked by all-LED fog lamps. 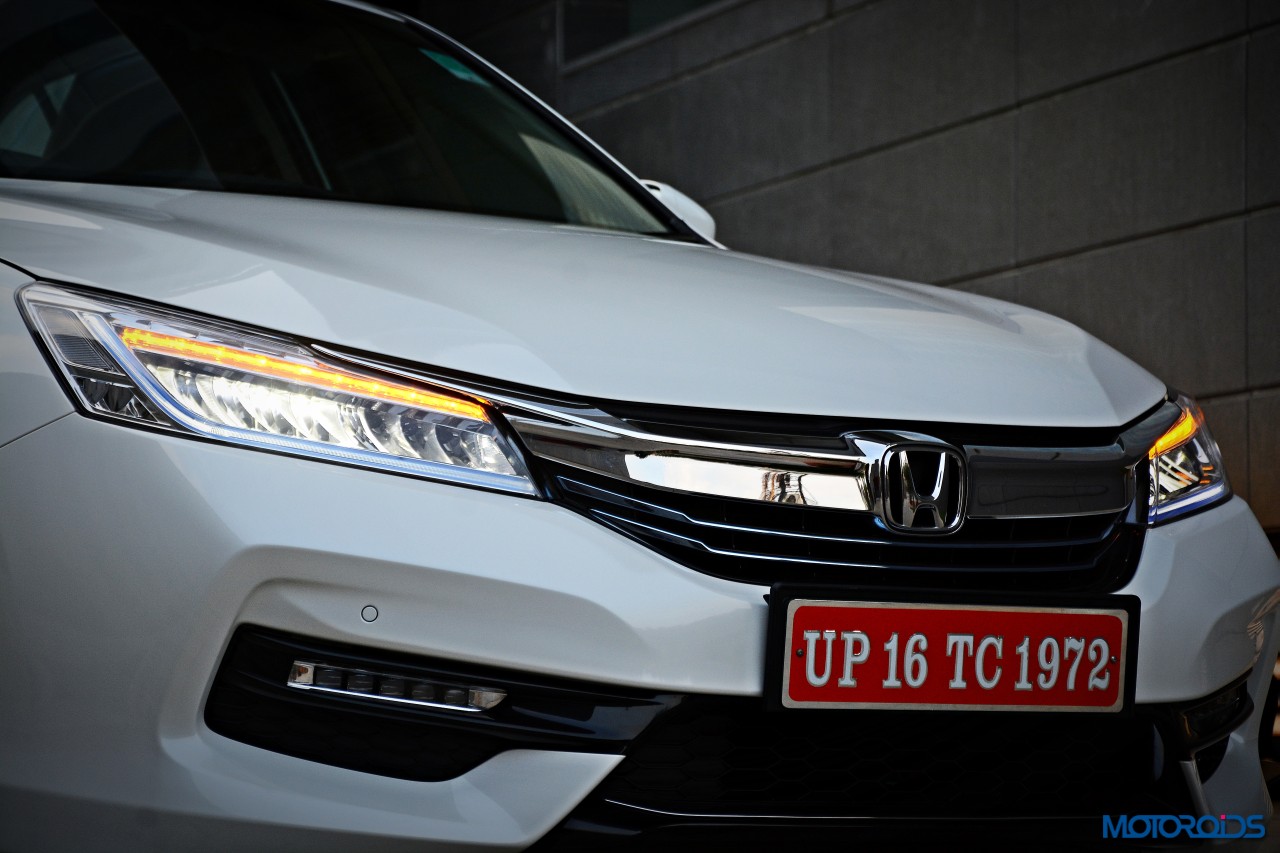 Where’s the high tech party? Inside the headlamps, which gets full LED illumination a curved running lamp, which makes things look mean, aggressive and new age. 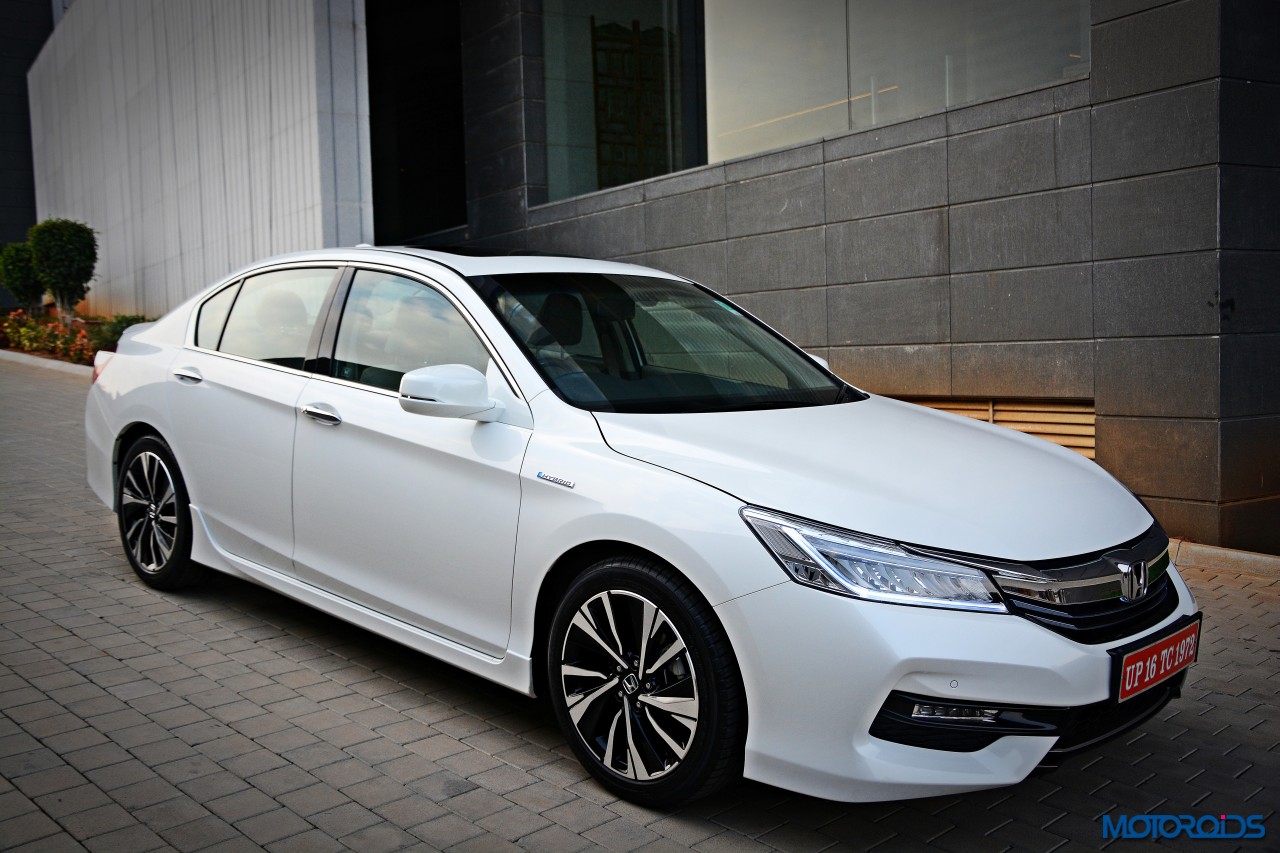 Moving to the sides, a sharp crease runs along the shoulder and the belt line, which tautens things up. 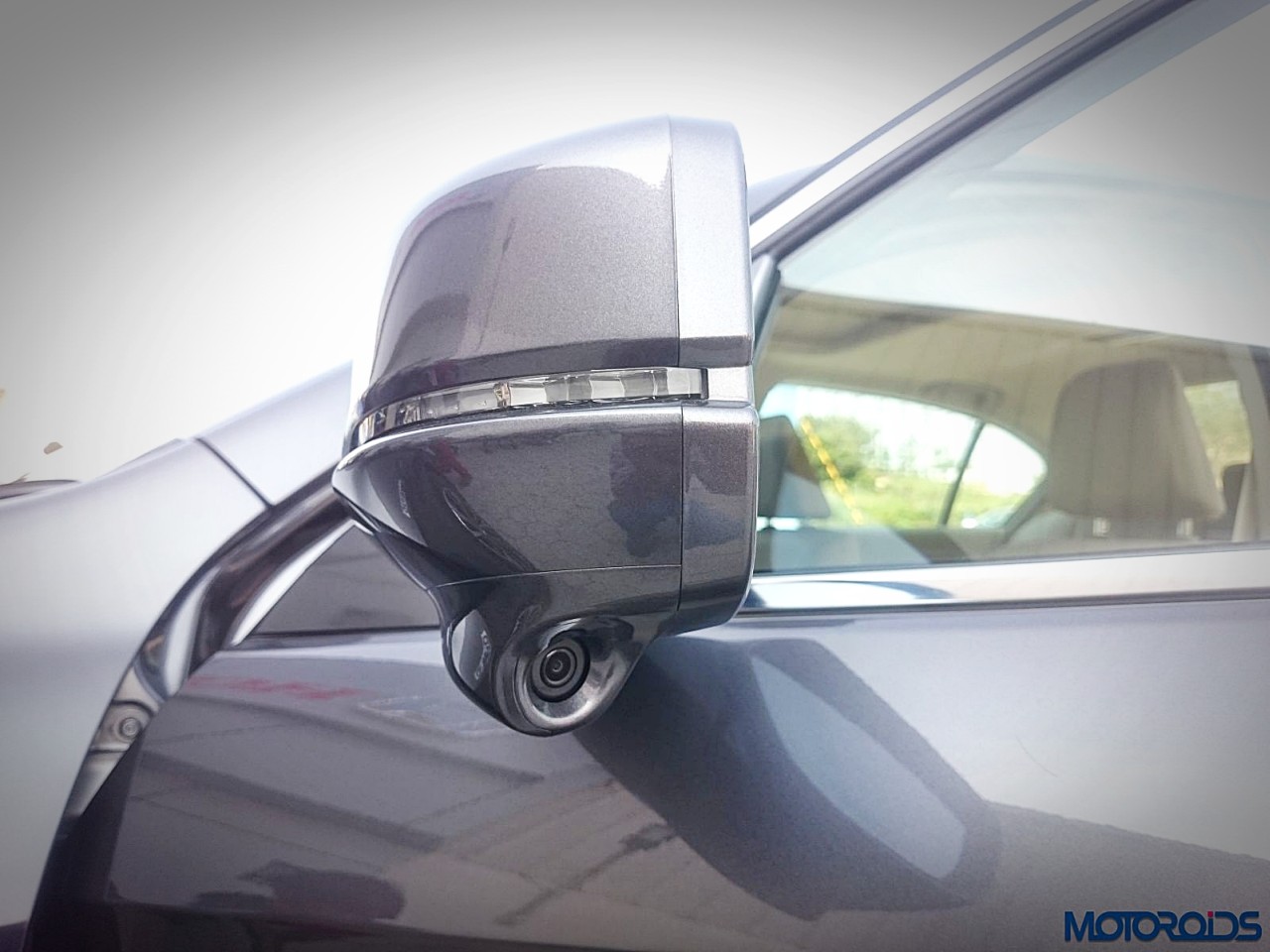 While, if you’re paying close attention, you’d notice a blind spot camera on the left wing mirror, which captures area not covered by the mirror and send a live feed on the central screen. 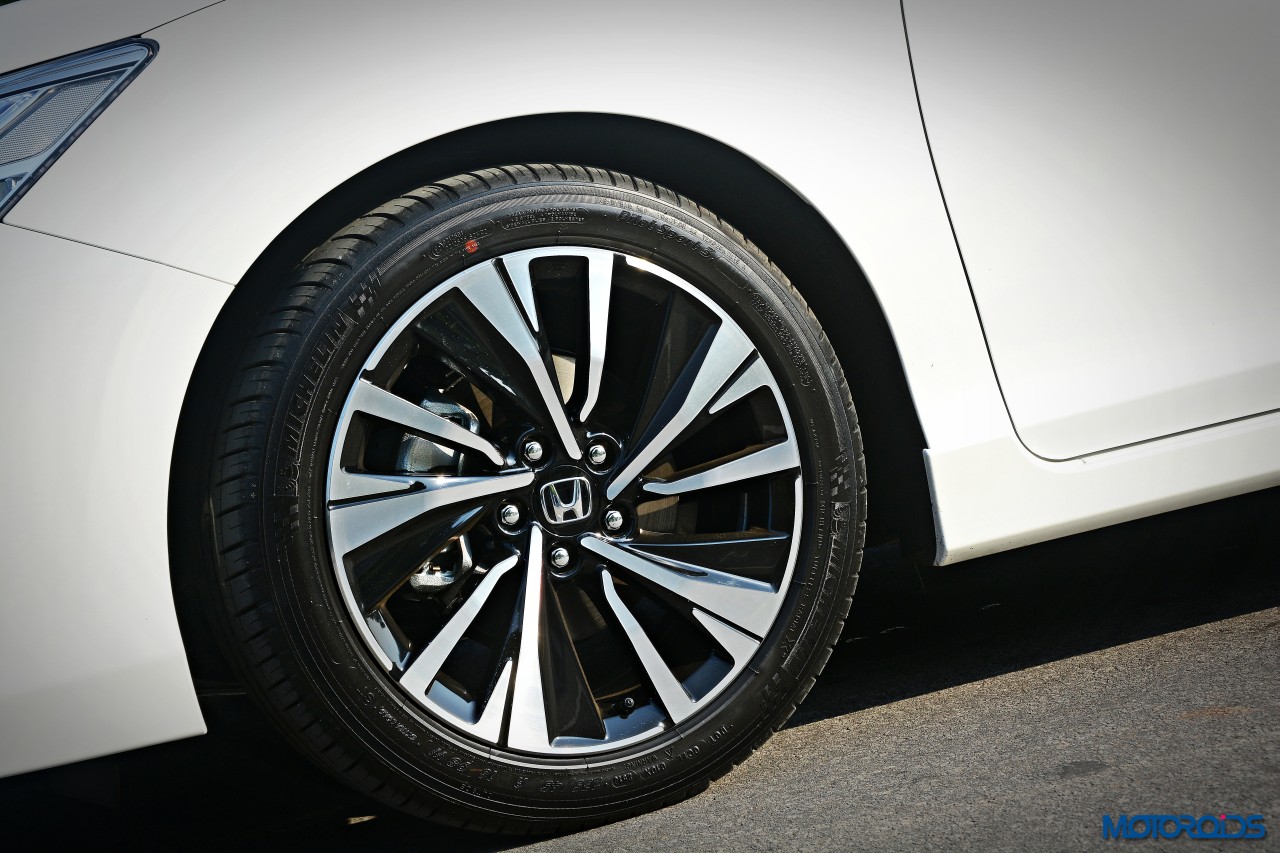 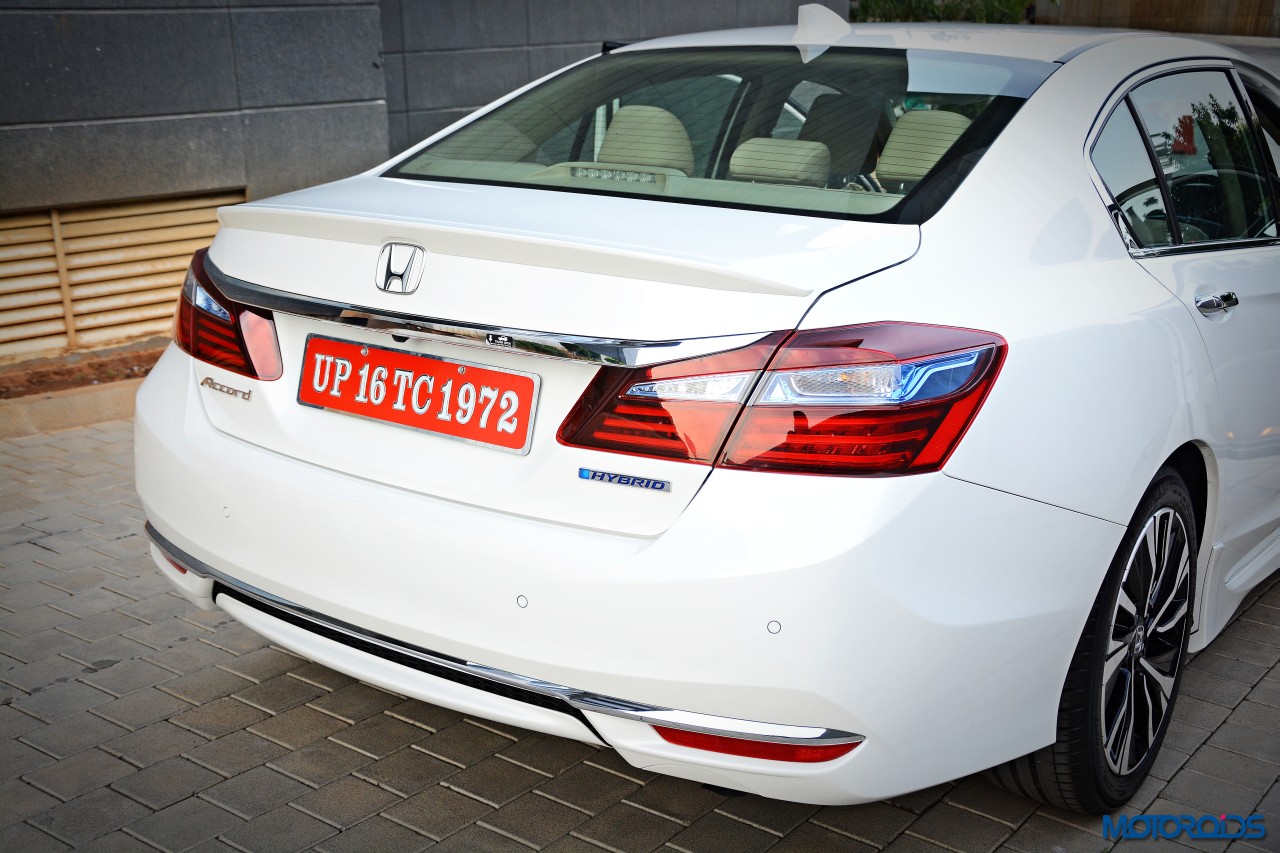 At the rear, an integrated spoiler does well to make things appear athletic, while there’s an ample dose of chrome above the licence plate and in the chin area of the rear bumper. 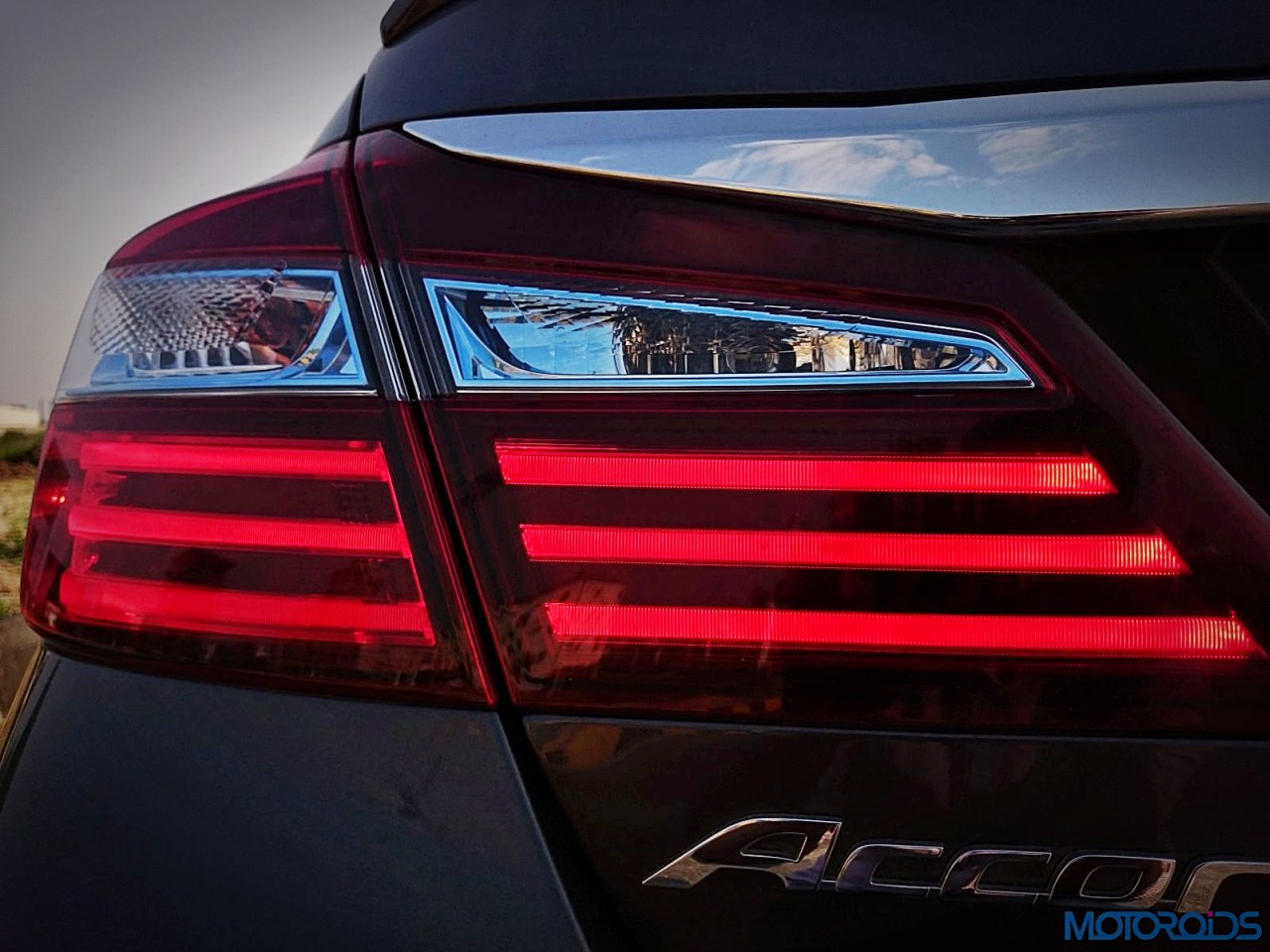 Tail lights get LED treatment too, and if you look closely, you’d find some of that blue hue in the clear lens area. As a whole, the Accord looks purposeful and attractive as a package, appearance wise.

The New Honda Accord Hybrid can be had in the shades of Modern Steel Metallic, Lunar Silver Metallic, White Orchid Pearl, and Crystal Black Pearl.

Honda Accord Hybrid Cabin and comfort

The new Accord’s cabin exudes great sense of space, from the very moment you take a look at things. Both front chairs get power adjusters and provide great all round support, but then unlike in the Camry Hybrid, there isn’t any cooling or heating function for the seats. 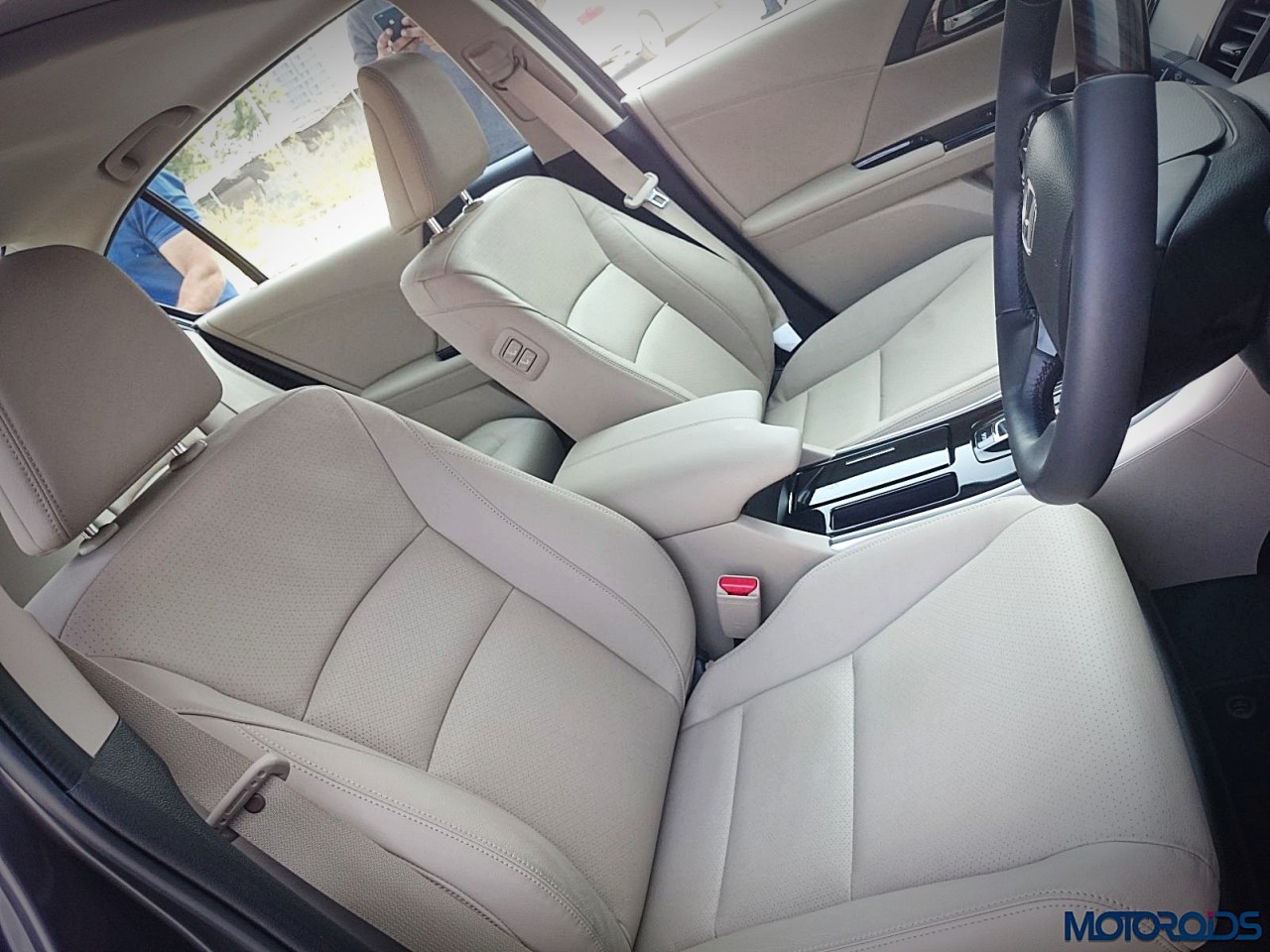 You do get leather all around, and while it’s all pretty neat and premium, it could probably have been a shade better for this class of cars, especially for the stuff on the dashboard. 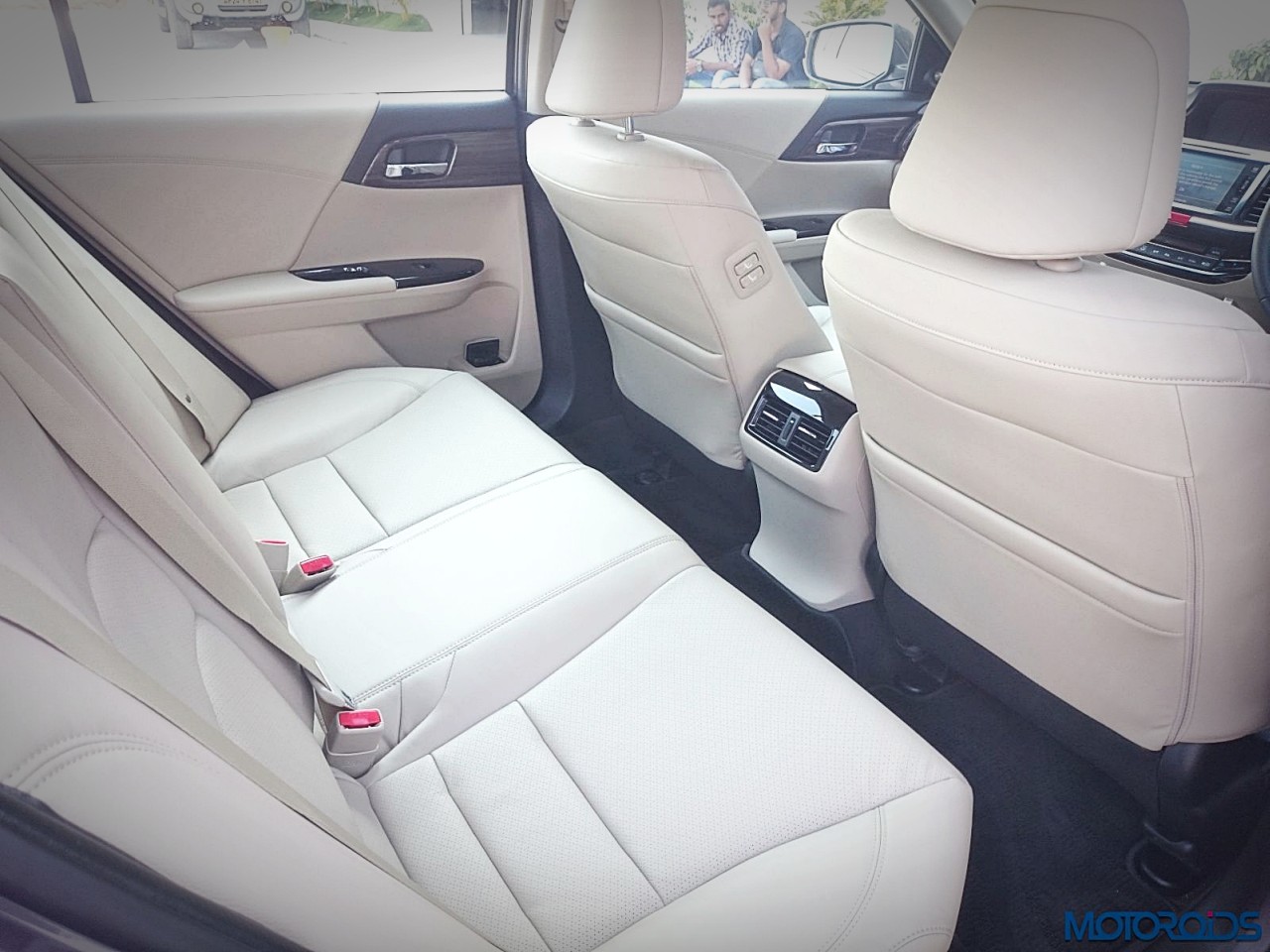 Rear seats provide excellent under thigh support, even for tall passengers and there’s ample space to lounge around. The rear backrest doesn’t recline though, which would have been a nice feature for those long journeys. The front passenger seat gets a ‘BOSS’ switch though, allowing the sugar daddies to increase their leg space at the flick of a button. Since there are batteries and motors eating up space,  the spare tyre will occupy boot area like some German cars. 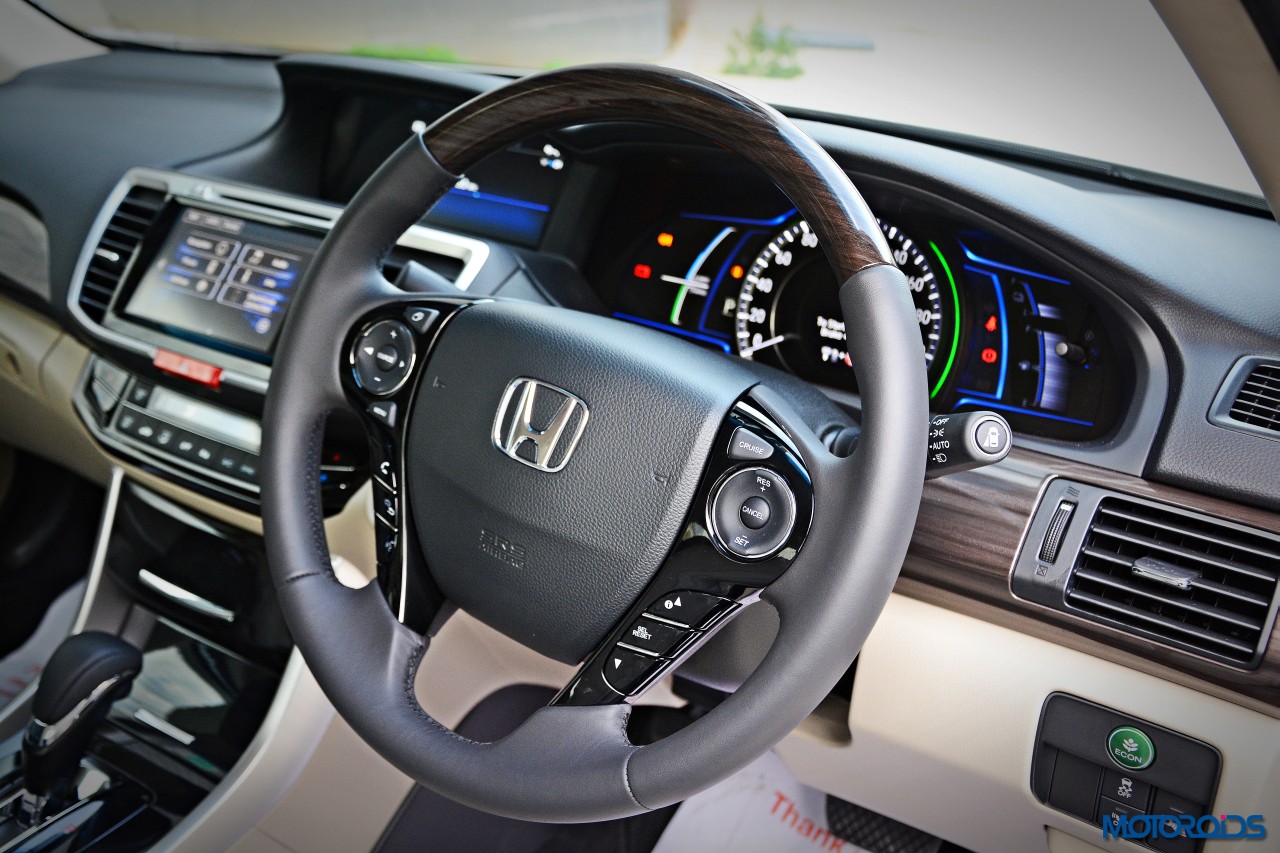 The Steering feels sporty to hold and has various switches to toggle between the screen in the instrument cluster and central display. Electric sunroof is standard, but views aren’t panoramic. Cabin illumination is a rather simplistic ‘push me’ lamp which has yellow filament bulbs. We would’ve liked some LEDs there to go with the theme. 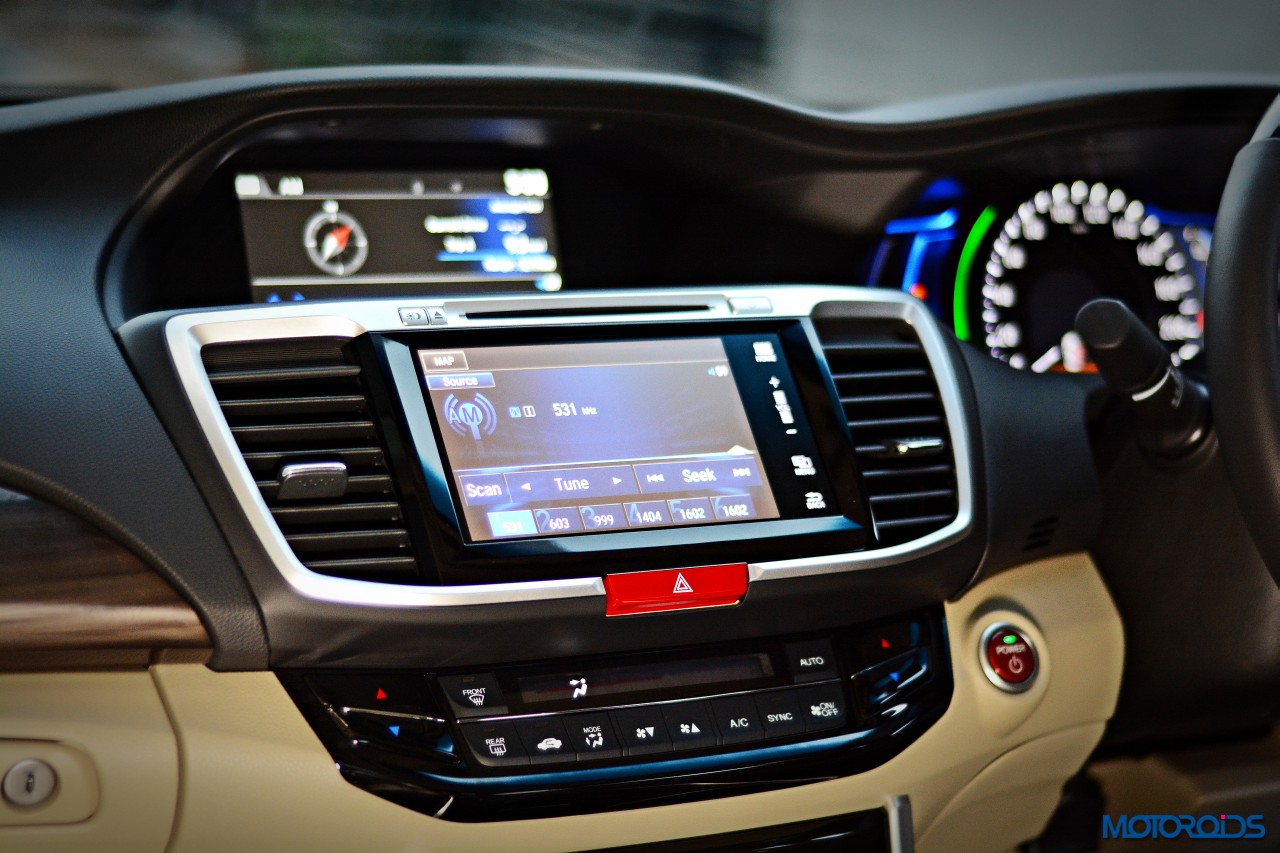 Inside the spacious cabin, the new Honda Accord Hybrid features a full range of equipment with premium functions. This includes an Engine Remote Start to pre-cool the cabin even before entering the car. A 7.7” Advanced touch-screen infotainment system in included that supports Apple CarPlay and Android Auto with embedded navigation and Internet browsing capability. 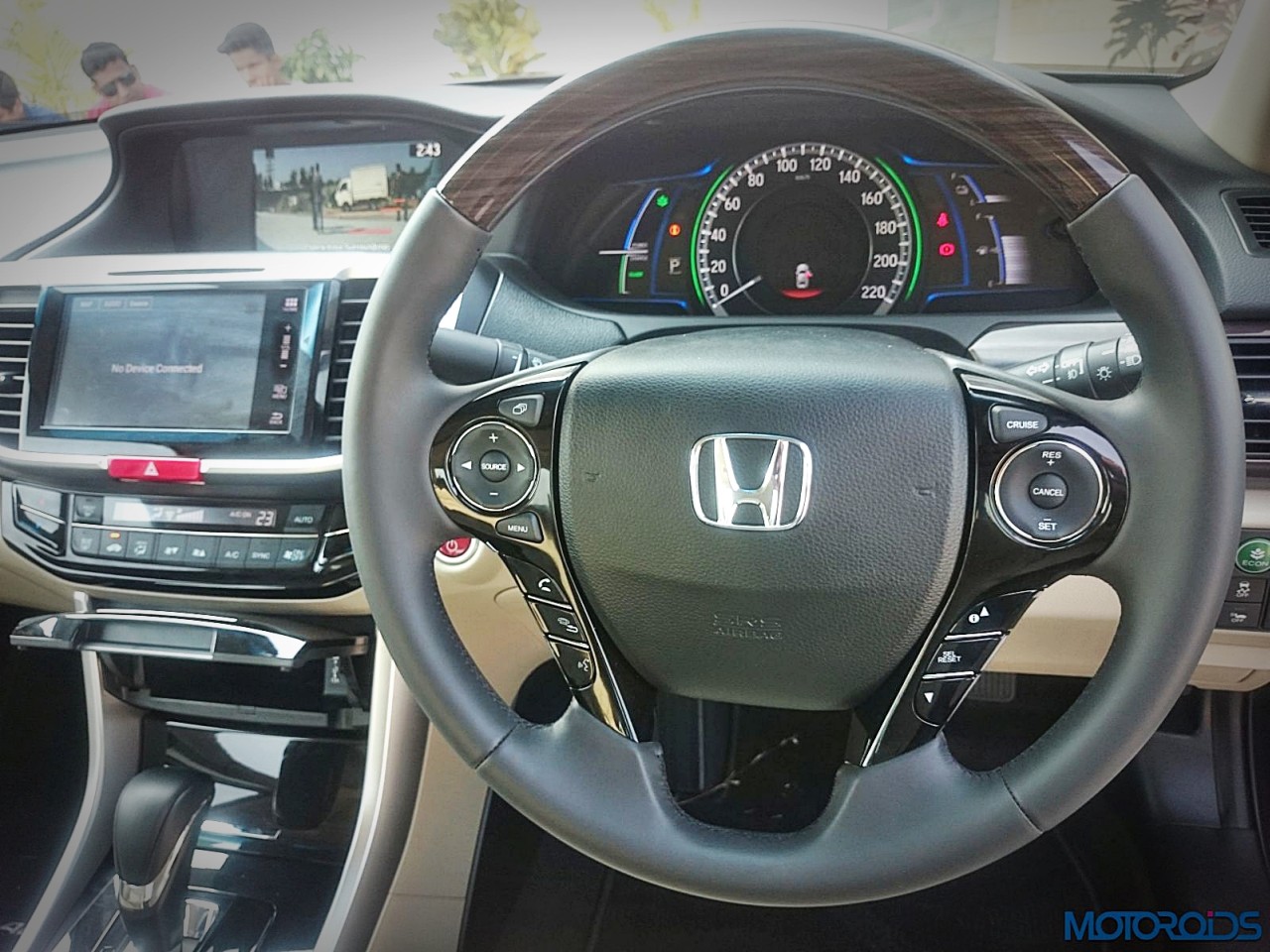 The Multi-function Steering Wheel features control for the Dual Zone Climate Control. This system is capable of  intelligently adjusting temperature and air volume based on direction and strength of sunlight. 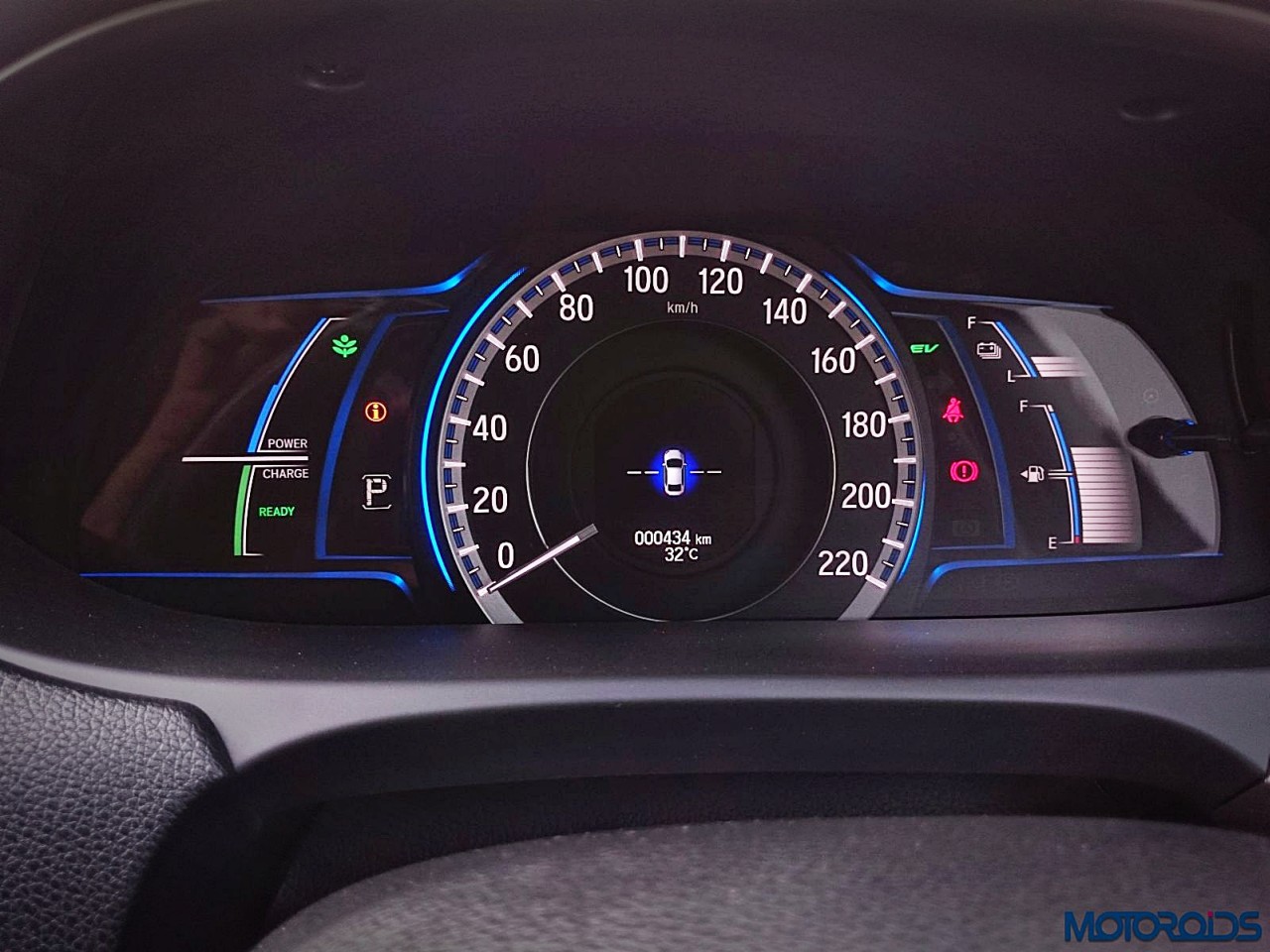 A large speedometer in the middle houses an informative display, which provides all sorts of information. Including, the variable choice the system makes to feed power to the wheels – electric, engine or both. The central display provides information related to navigation, Audio and fuel economy. Touch feedback is good and also gets pinch to zoom in/out of maps. It’s pretty good, though doesn’t have the highest resolution, best UI or feel. It works, and works pretty well though. 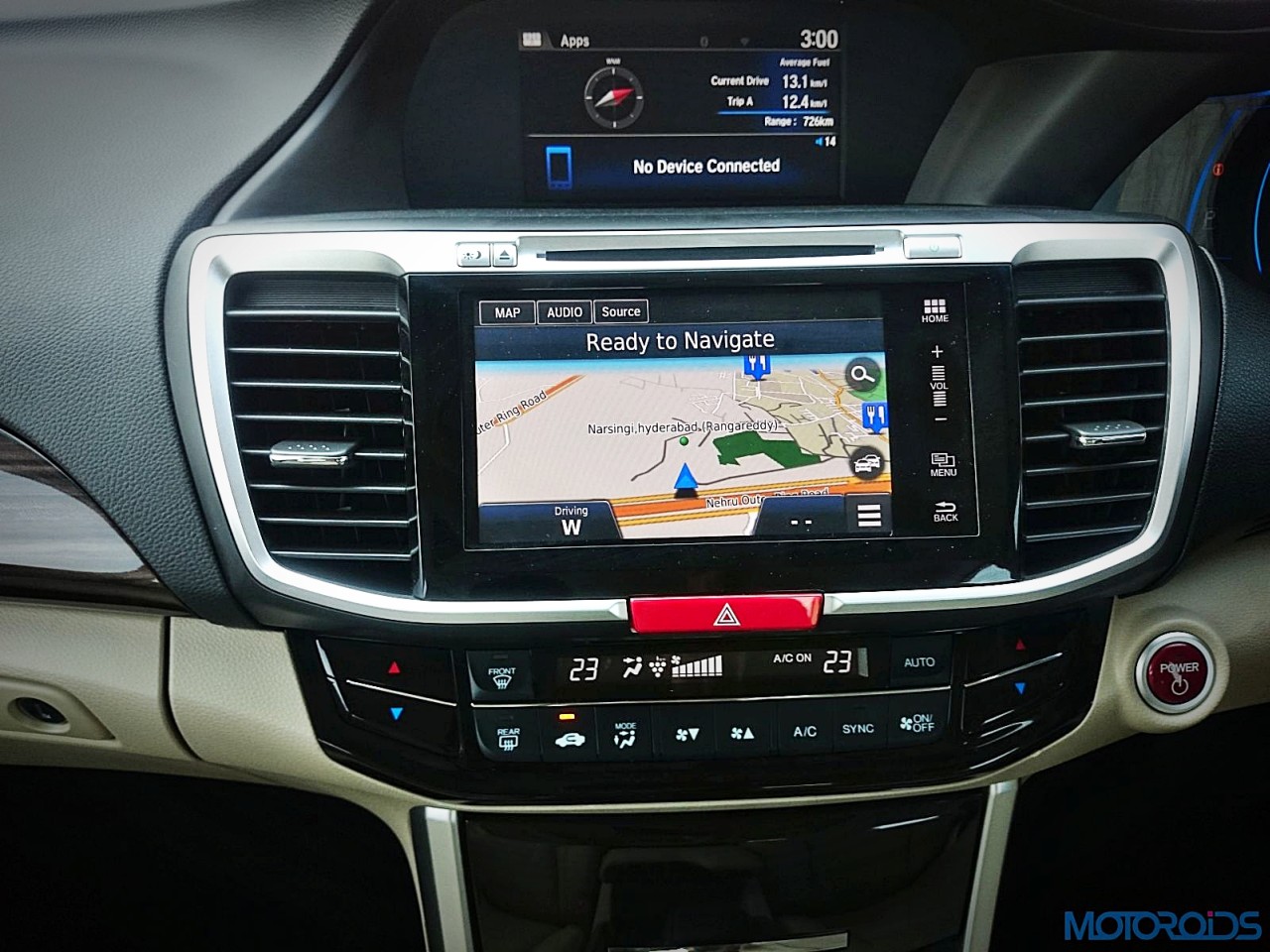 A camera under the left ORVM captures blind spots which the mirror leaves out and sends back a feed to the central screen. This feature can stay on continuously via a switch on the right stalk, or comes on when the left blinker is used. As mentioned before, a fancy addition is the ability to switch the engine on remotely via a switch on the keyfob, which can help heat or cool the cabin according to conditions.

Honda Accord Hybrid Powertrain and performance 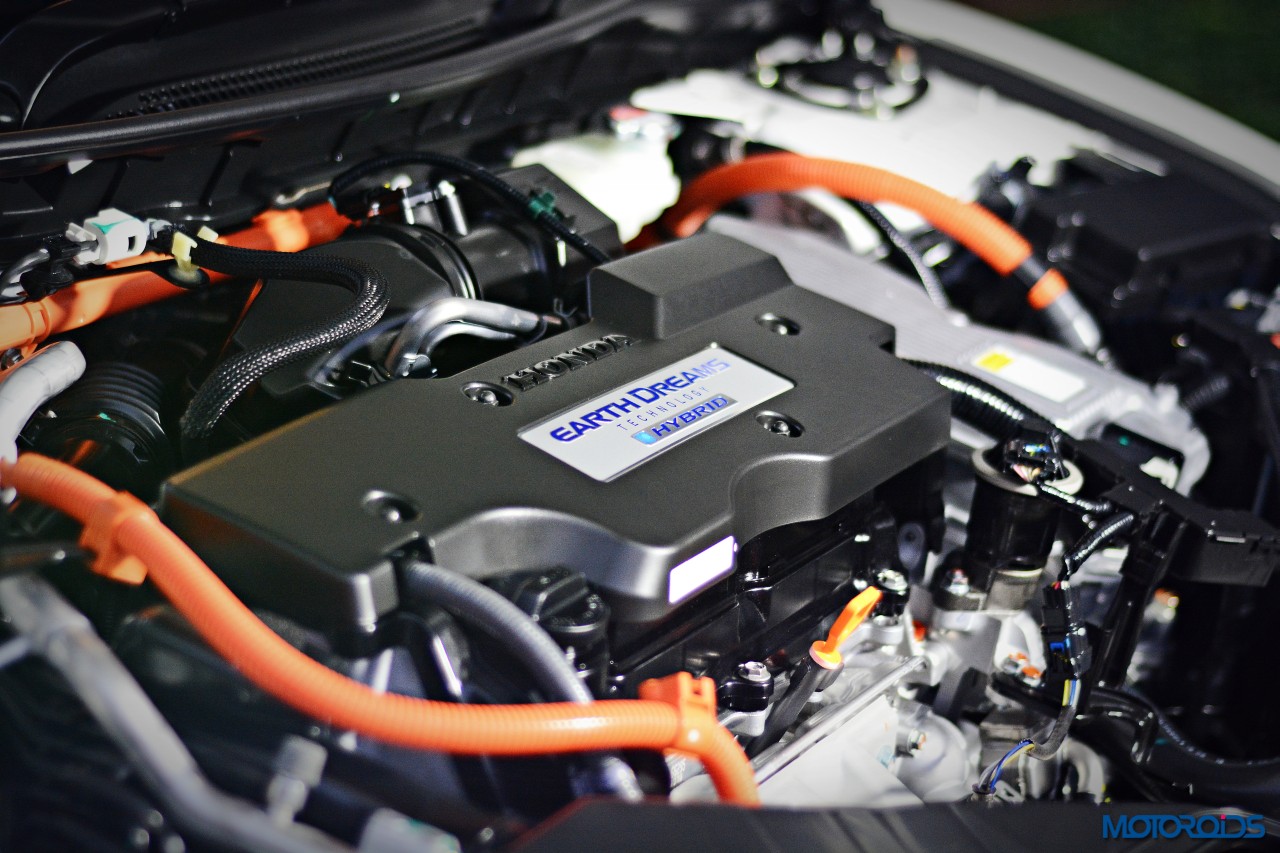 Honda claims that the Accord Hybrid has the world’s most efficient hybrid system with a fuel economy of 21.3 km/l. The combined maximum output from the hybrid system is rated at 215 PS, which is pretty impressive, especially knowing those efficiency claims.

The system switches intelligently and seamlessly between 3 driving modes to match all driving conditions.

The E-CVT gearbox comprises a drive selector which allows the driver to choose from a special ‘B’ mode as well. The B mode enhances regenerative braking by allowing the motors to recharge aggressively as you lift your foot off the accelerator pedal, in turn, making the car decelerate rapidly. 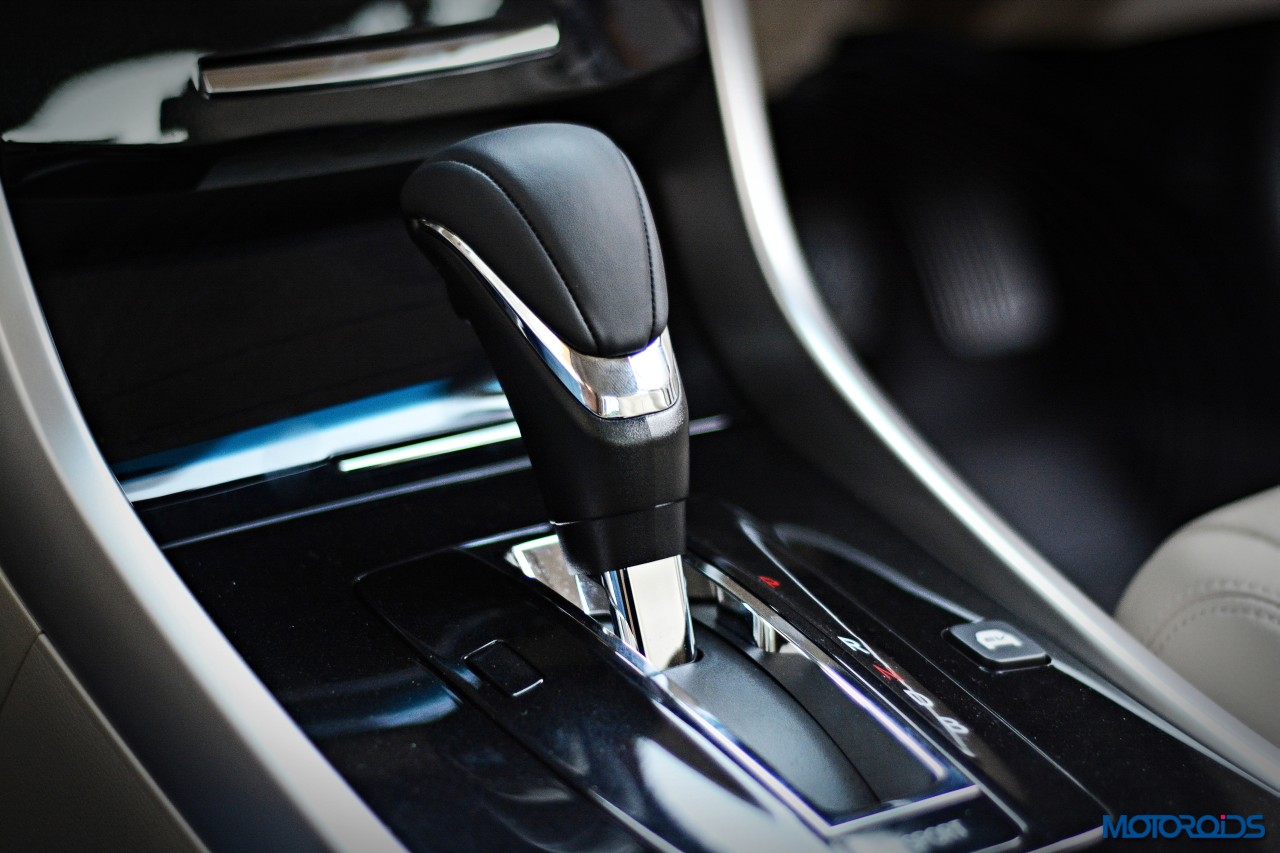 While this mode does charge the batteries more efficiently, its use is not advisable on open highways, where you’d rather lift off the pedal and let you car coast for maximum efficiency. It is however, advisable use this mode while doing downhill for long durations, and even through slow moving traffic in city.

There’s also a Sport Drive Mode incorporated within the E-CVT system. The Sport mode can be activated by pressing the “sport” button on the center console. This mode allows the system to make use of both engine and the electric powertrain to allow for quicker acceleration. 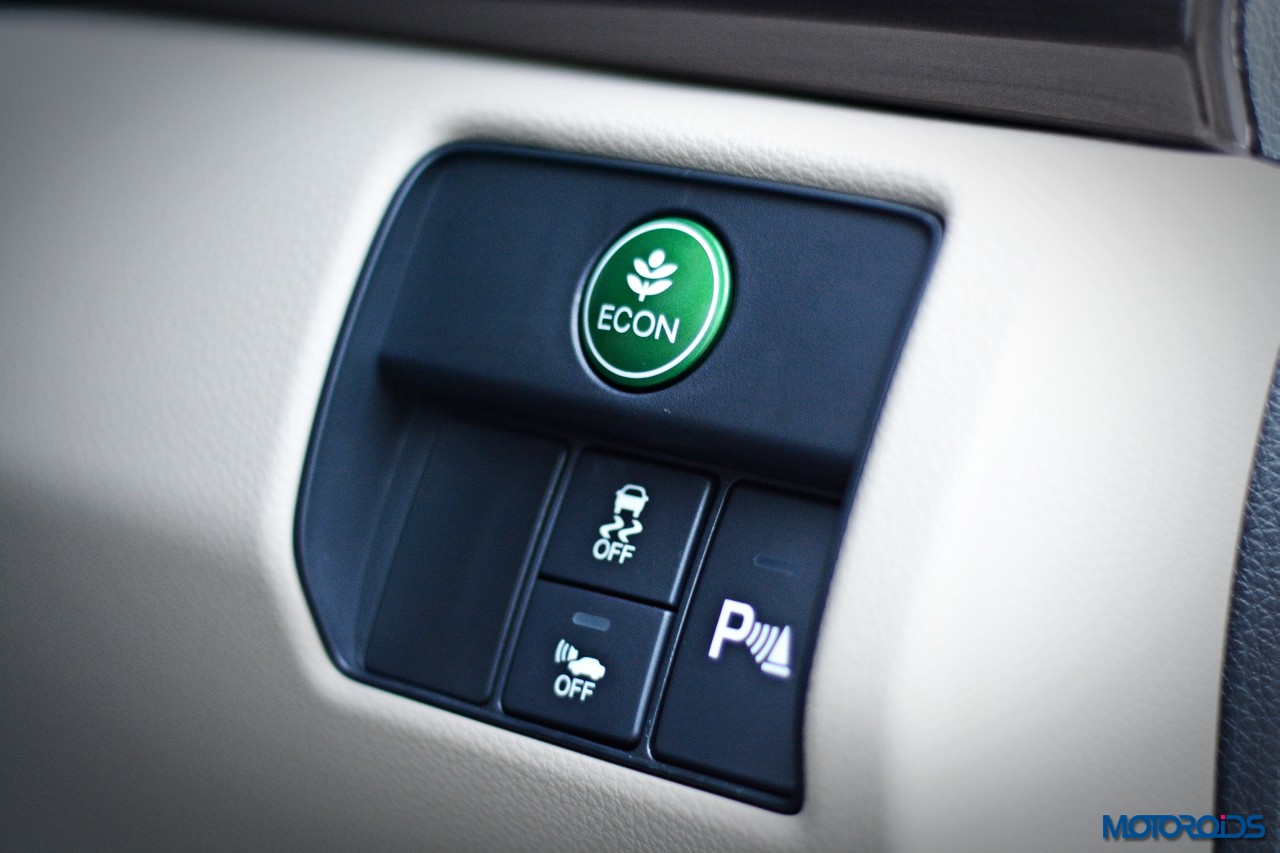 In addition to the aforementioned modes, the driver also has the option to choose an ECONOMY mode for enhanced fuel efficiency. Traction control can be switched off manually, though the Accord Hybrid’s powertrain doesn’t lend itself for the kind of things you’d want to do by turning that system off. When launched with Sport mode on and traction control off, the Accord hybrid takes off the line in a pretty quick fashion. Now, while the progress off the block and to a certain speed is quick, keep that right pedal pressed and the engine starts feeling noisier than the speed displayed on the clocks. So while part throttle and cruising is handled in a silent, smooth, seamless manner, if you press hard, the engine starts sounding whiny. The powertrain sound at this point is louder than ideal, and makes you feel you are going faster than you actually are.  The E-CVT gearbox is good for cruising and light throttle inputs, though mashing it hard makes you feel as though the car has to make do with just one really long ratio.

Honda Accord Hybrid Ride and handling

Since it’s getting imported as a CBU, the Accord Hybrid, quite naturally, hasn’t been fine tuned for our ‘unique’ roads. Even though it’s coming from a developing country like Thailand, those of you who have visited the travelled through the country by road would acknowledge and appreciate its  incomparably better quality of roads. And owing to the aforementioned reason, the ride quality isn’t quite optimized for the rough surfaces our roads abound with. This is quite evident at slow speeds, where there is perceptible vertical movement inside the cabin, though the ride settles down nicely as the car gathers momentum. 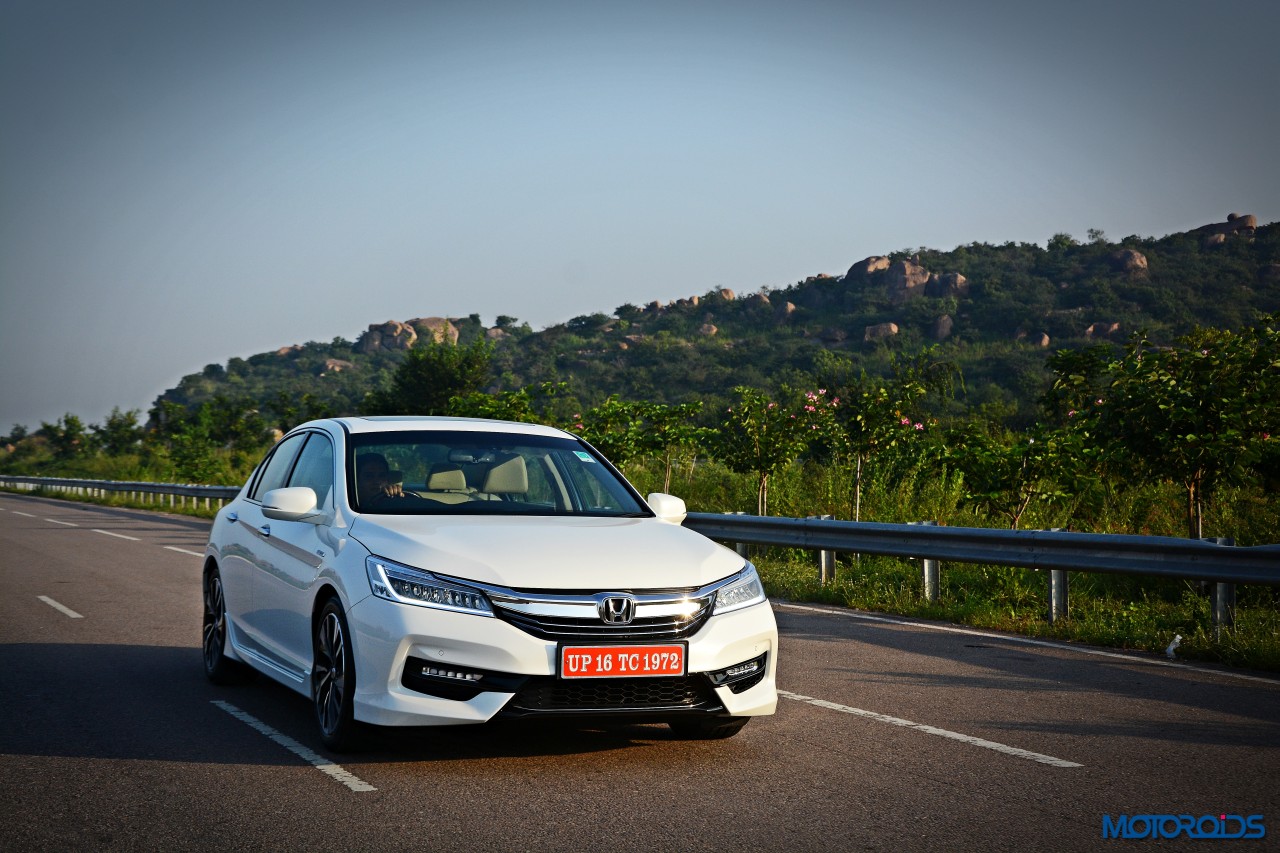 Steering feels well weighted and nice to hold. Since this test drive was carried out only on straight outer roads of Hyderabad, we wouldn’t prefer commenting on the dynamic ability of the car around bends or hilly roads.

Deceleration, however, is stronger than usual when you take your foot off the pedal. The car, even in drive mode won’t coast in a free-flowing manner and applies regenerative braking to charge batteries more optimally.

The Accord Hybrid glitters with tech all around, and safety department isn’t an exception with top of the line safety features making this global top seller shine. Apart from utilizing the latest version of Honda’s proprietary Advanced Compatibility Engineering (ACE) body structure for structural rigidity and crash compatibility, the Accord Hybrid has a few other tricks up its sleeve too. The Pedestrian Injury Mitigation Design ensures safety of the pedestrians along with the occupants of the car. 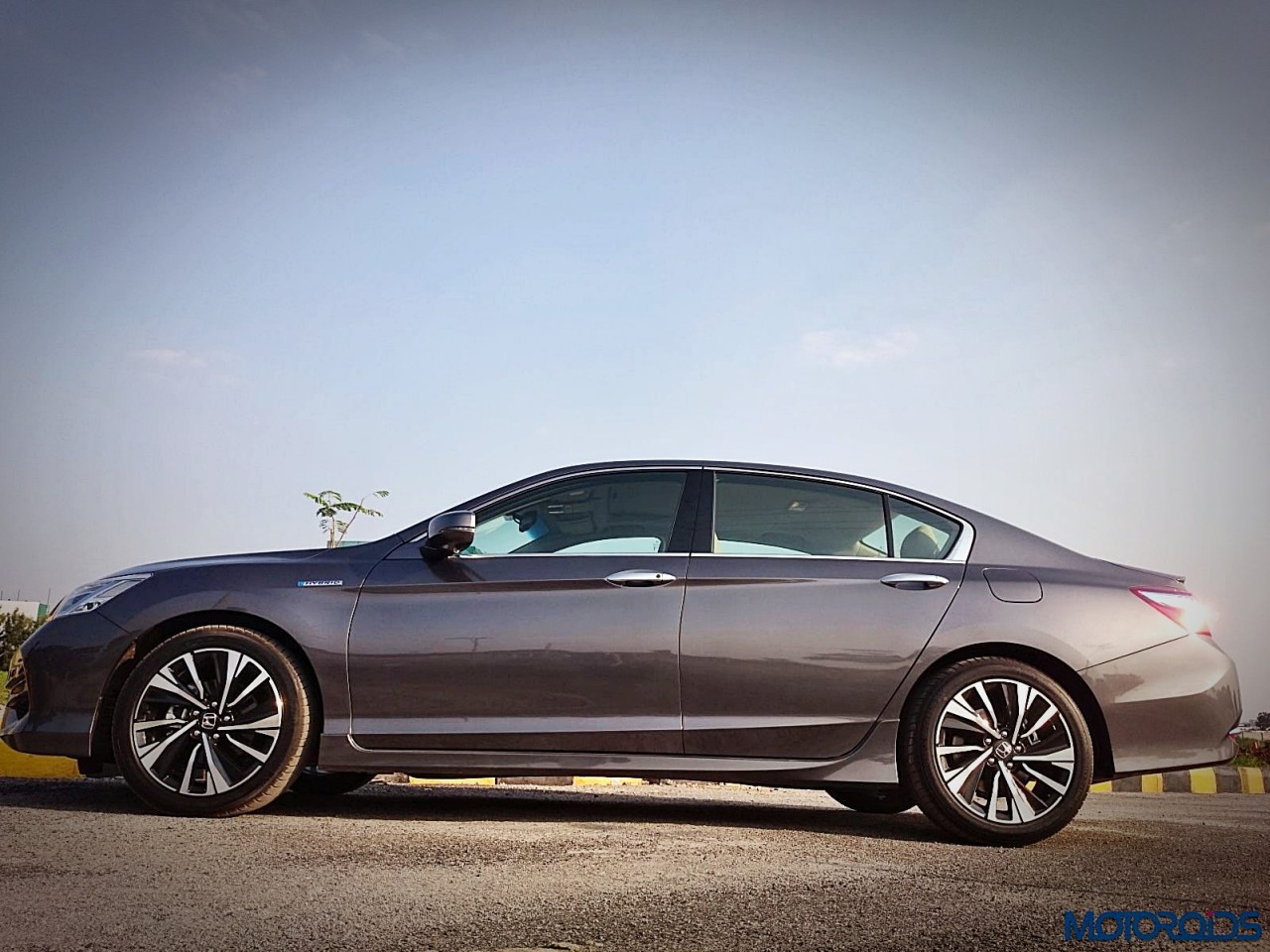 An interesting active safety feature is the Honda LaneWatch blind-spot display with a camera on the passenger-side mirror that projects its visuals on the 7.7 inch i-MID screen. There’s also a multi-angle rear view camera with 130-degree, 180-degree, and top-down views. The Accord Hybrid also features Active Cornering Lights (ACL) for better night time visibility while turning. 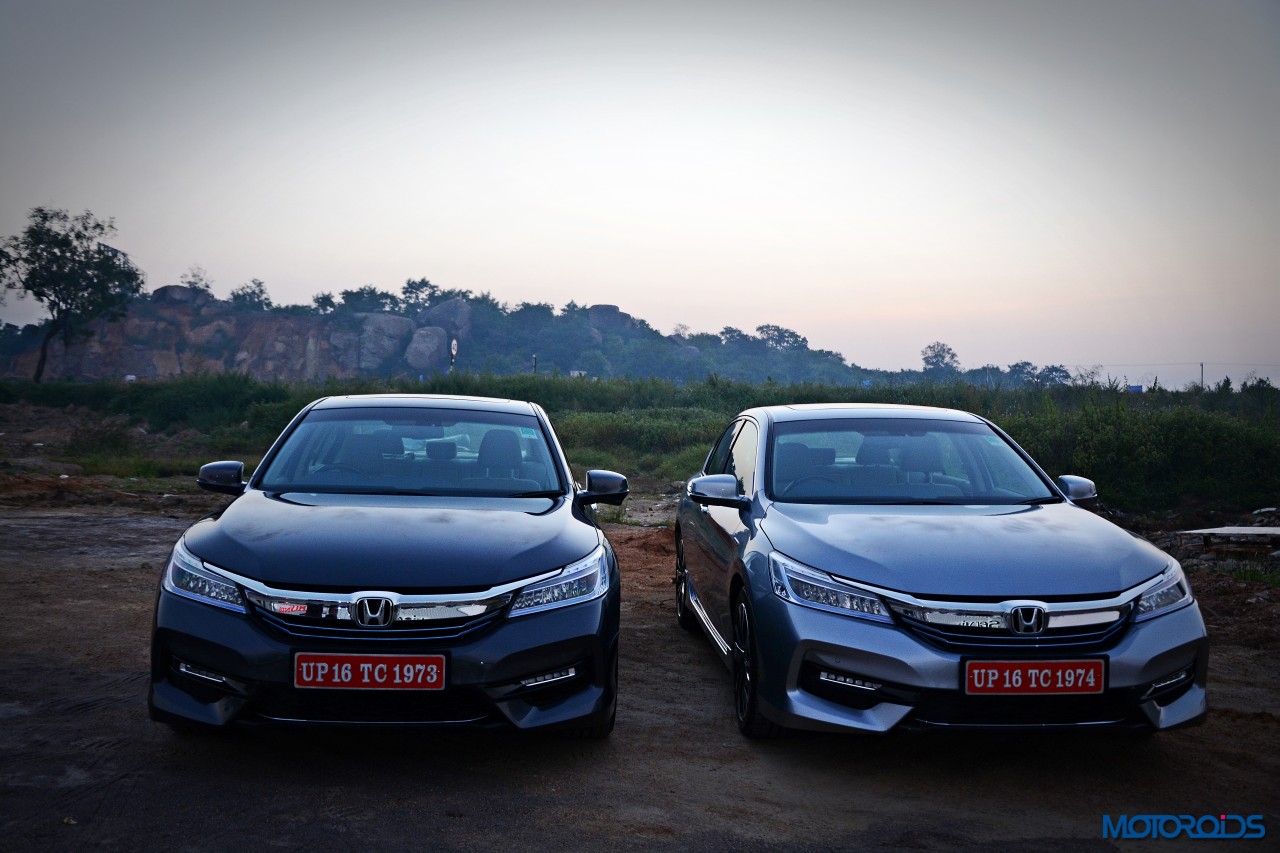 Let’s be clear about one thing here – the Accord Hybrid is not for everyone. For those who want to weight the value they get right down to grams for every rupee spared, probably a conventionally powered car would make more sense. This one’s for the rich and the responsible. For those who who really care for the air and the trees around them, or at least want to be seen that way. It’s a properly premium car and flaunts its very green, well blue, and guilt-free label with pride. It’s more for your conscience than your brain, and the earlier you realize that fact, the more sense this snazzy looking, and rather expensive hybrid would make to you. 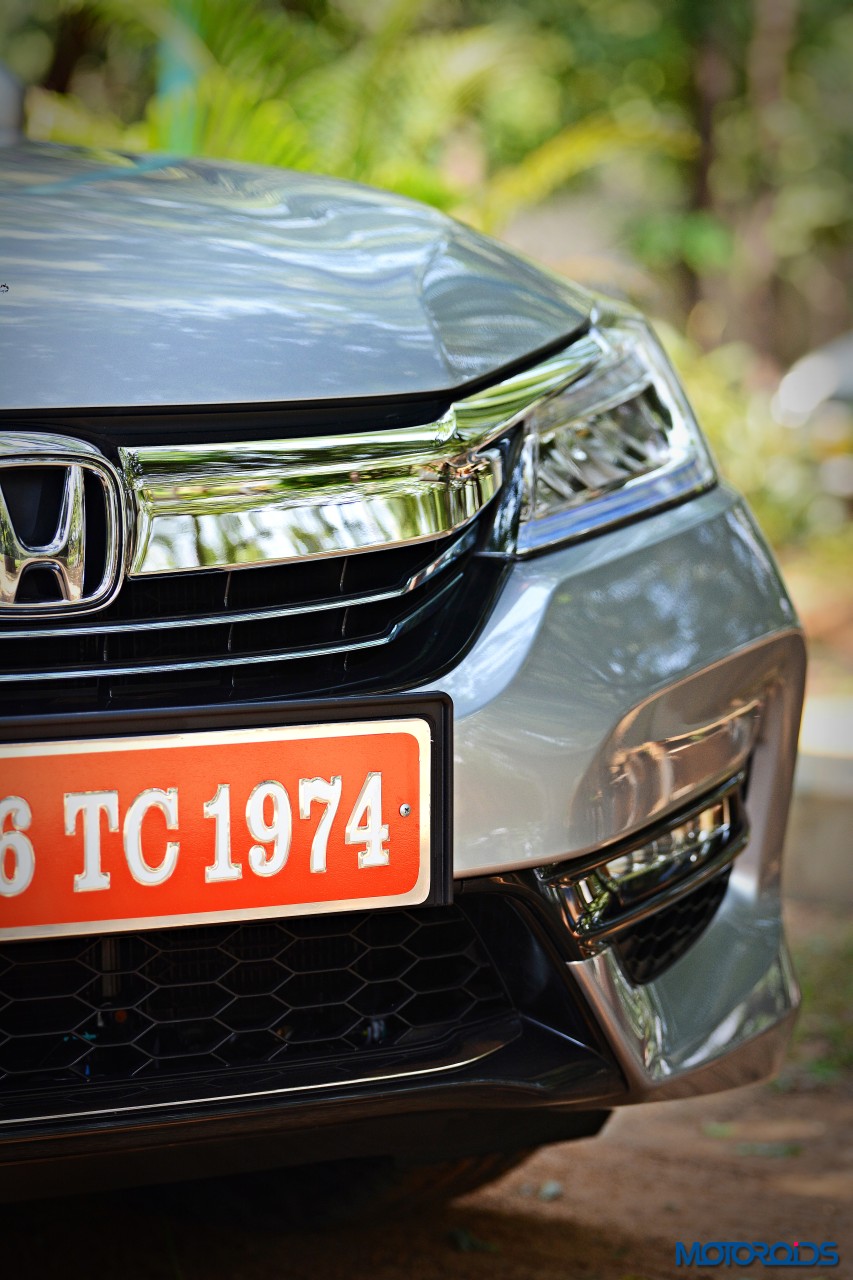 The Honda Accord Hybrid is imported from Thailand as a Completely Built Unit which means that it won’t get any rebates that similar India-assembled cars get. It does come with a 3 year Unlimited Km Standard warranty with Road Side Assistance and a 5 year Unlimited Km warranty on Hybrid battery, which somewhat helps matters.  It’s rather expensive, though, at INR 37 lakh (ex-Delhi) and a whopping (40 lakh ex-Bengaluru).

However, if you’re out to save the world, or cleanse your conscience, no price is big enough. And for those who have a big enough heart and deep enough pockets for the cause, it hardly matters.