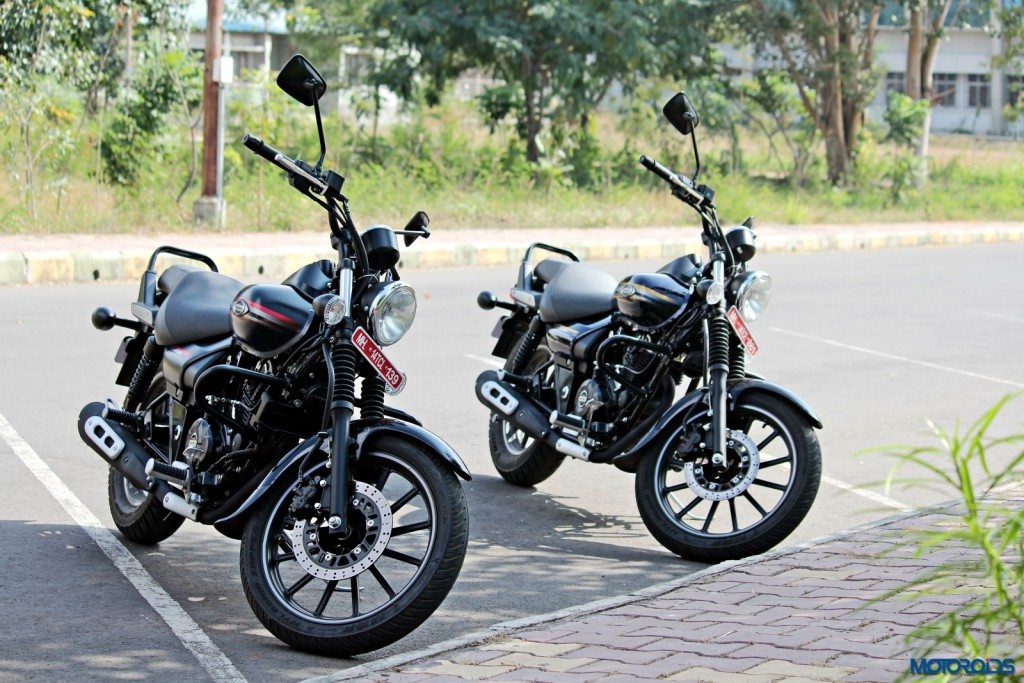 The Avenger series, after creating ripples originally in its Eliminator avatar, and for a fair while in its Avenger incarnation slowly dwindled down to lukewarm sales. While the opportunity was always there for the taking, it took Bajaj Auto half a decade to reboot the Avenger family. In its newest-gen version, the Avenger model line has spawned three variants, a Chrome lashed Cruise line for the 220cc engine powered version, and a dark themed, city oriented Street version in 220cc and 150cc flavours. 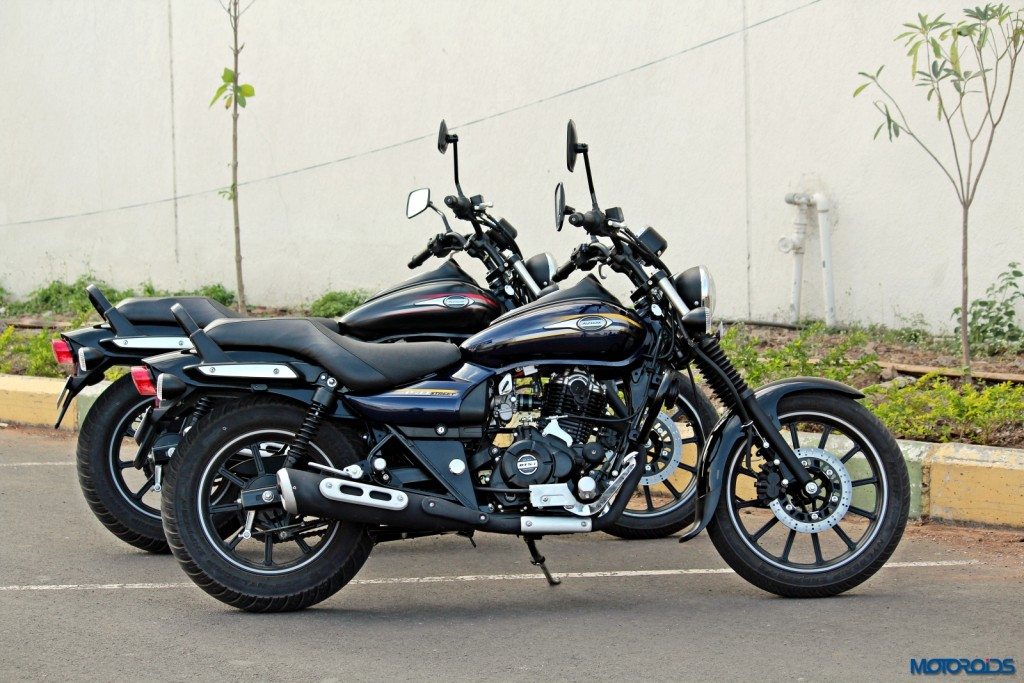 We have reviewed the Avenger Street and Cruise 220 in great detail elsewhere on these pages. Please follow this link to read about the design, features, performance and handling of the two motorcycles. In this review, we will focus primarily on how the smaller engined 150 Street fares. Here goes. 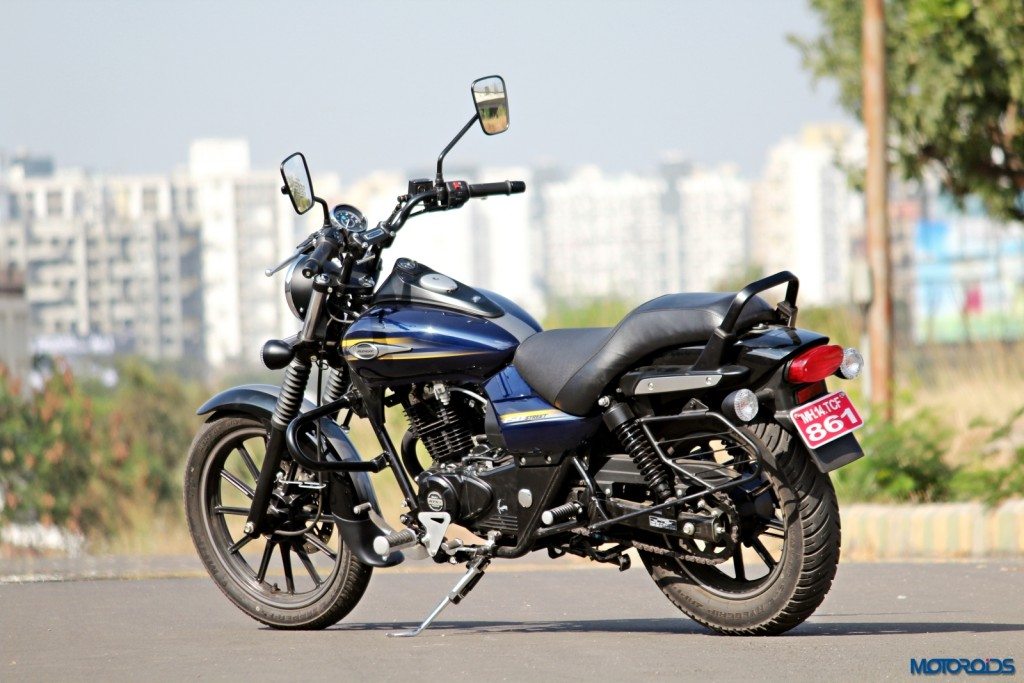 The Avenger Street 150 is the youngest and smallest-engined member of the Avenger family. It shares its visual identity to a great extent with the bigger 220 Street, and the differences between the two are minimal. Visually, a full-blown Avenger, sans the sticker price and fuel costs of its bigger brethren, the 150cc version is for those who are interested in this genre of motorcycles solely for their appearance, are budget-oriented and don’t care much for the performance. A small 150cc engine may not make sense theoretically for the cruiser format, but you’d be surprised to know how many people are actually ready to put down their cash for a nice looking cruiser which doesn’t cost the moon. It does really make a lot of business sense. 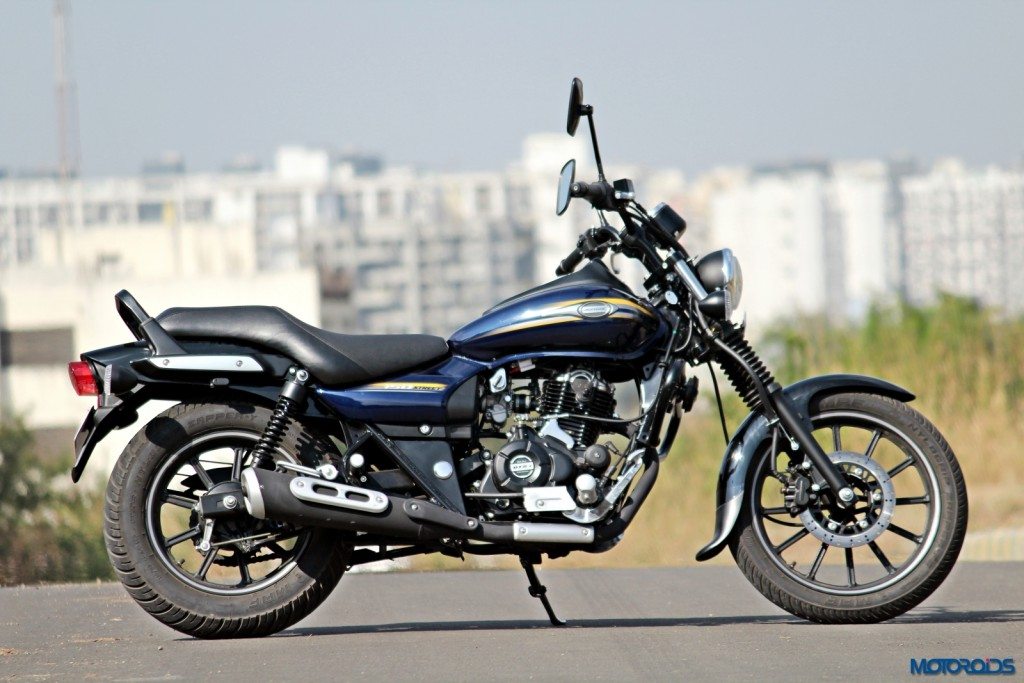 What are the visual differences between the Avenger Street 220 and 150?

On a glance the Street brothers retain almost identical shape and size. Both Street 150 and 220 stand in the same dark theme, with a new Avenger insignia. As mentioned before, you can read our exhaustive review of the Street 220 for our analysis of the model’s design. 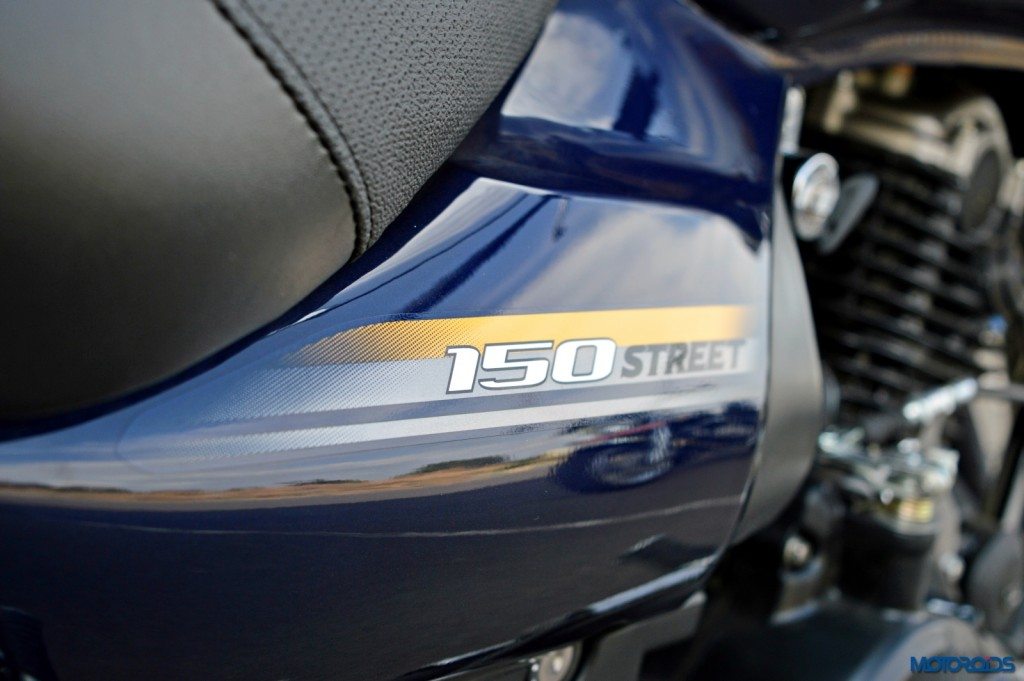 As for the differences, the biggest giveaway is the Midnight Blue colour in which the 150 comes painted, as opposed to the matte black finish of the 220. Interestingly, Bajaj Auto have launched these motorcycles with the option of only one colour for each model – so while the 150 can only be had in blue, the 220 Street and Cruise can be had in a hue of dull and glossy black only, respectively. 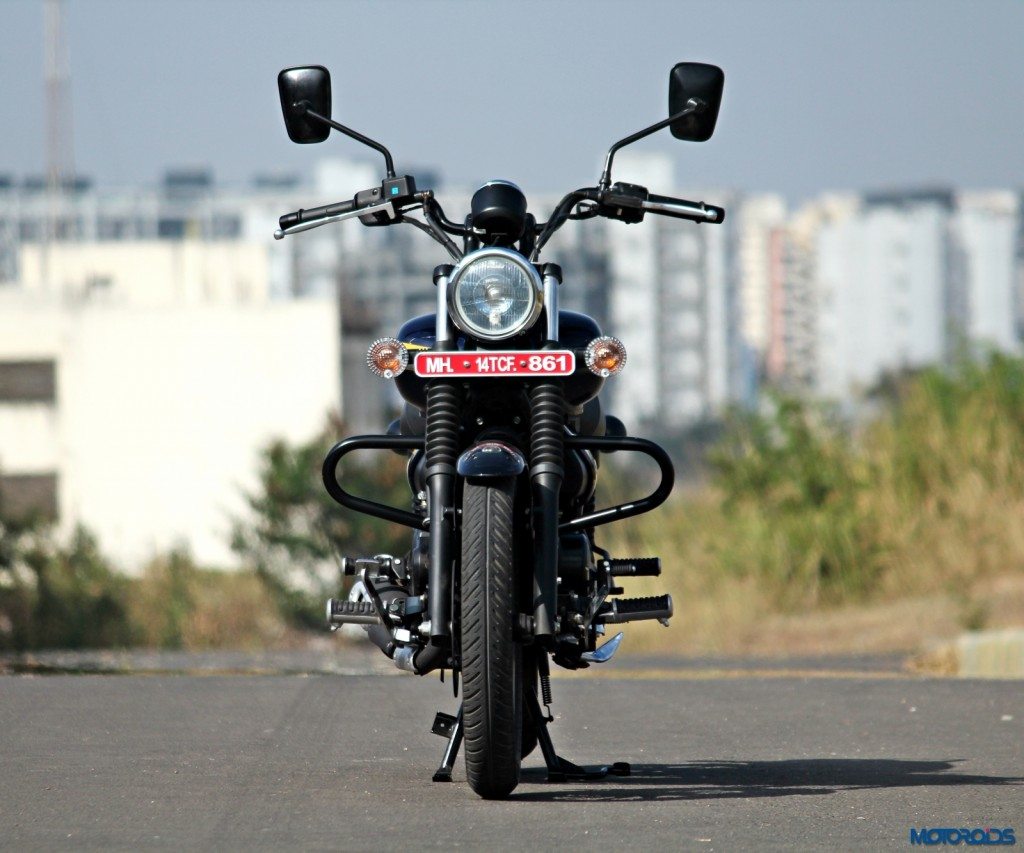 Another prominent difference is the shade of the stickering on the two models. While the 150 gets it in a yellow and grey combo, the bigger 220 gets a red and grey combination.

There are other differences too, though one really has to look hard to make them out. For those with an eye for detail, the small front disc on the 150 gives it away, even if one is colour-blind. The 150 also has a shorter wheelbase, though if you could make it out without measuring it, you should probably be awarded a medal in ocular excellence. Also, the smaller displacement engine makes the Street 150 get a somewhat larger see-through window under the tank as compared to the fuller engine bay of the 220s. 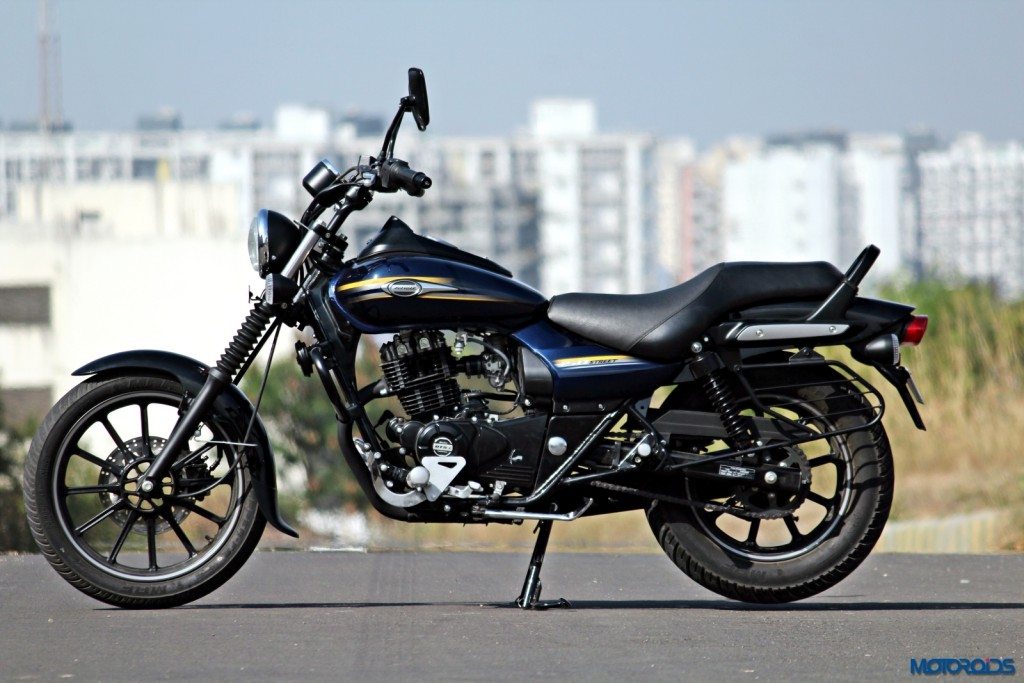 Spell out the numbers for me

The 150cc single cylinder twin spark air-cooled engine on the smaller Avenger is derived from the Pulsar 150, and has been re-tuned to suit the character of this genre of motorcycles. The low and mid range torque has been improved by 10 percent to improve tractability and prevent spluttering while riding in low revs and high gears. 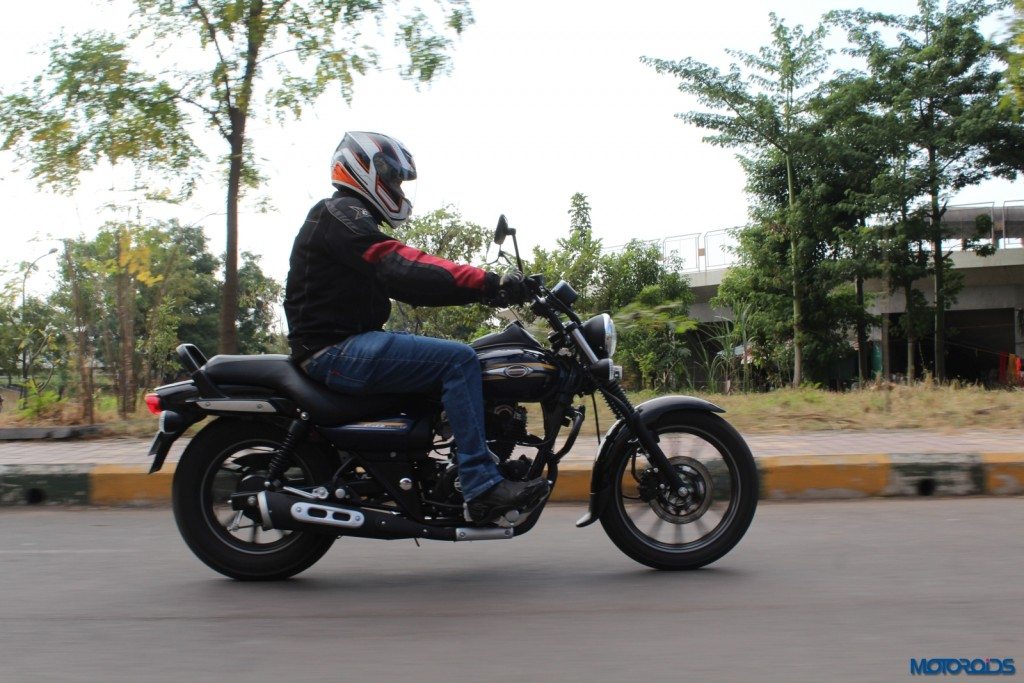 How does it feel on the go?

Sure, the Avenger is a big, heavy platform with big fat tyres providing traction, so there obviously are some clearly perceptible differences as compared to the bigger engined duo. That said, the Avenger 150, and surprisingly so, doesn’t feel underpowered as long as you are trundling around within the city limits. In fact, the smaller engine feels smoother, revvier and a whole load of fun to work through the gears within the moderate speeds of the city. 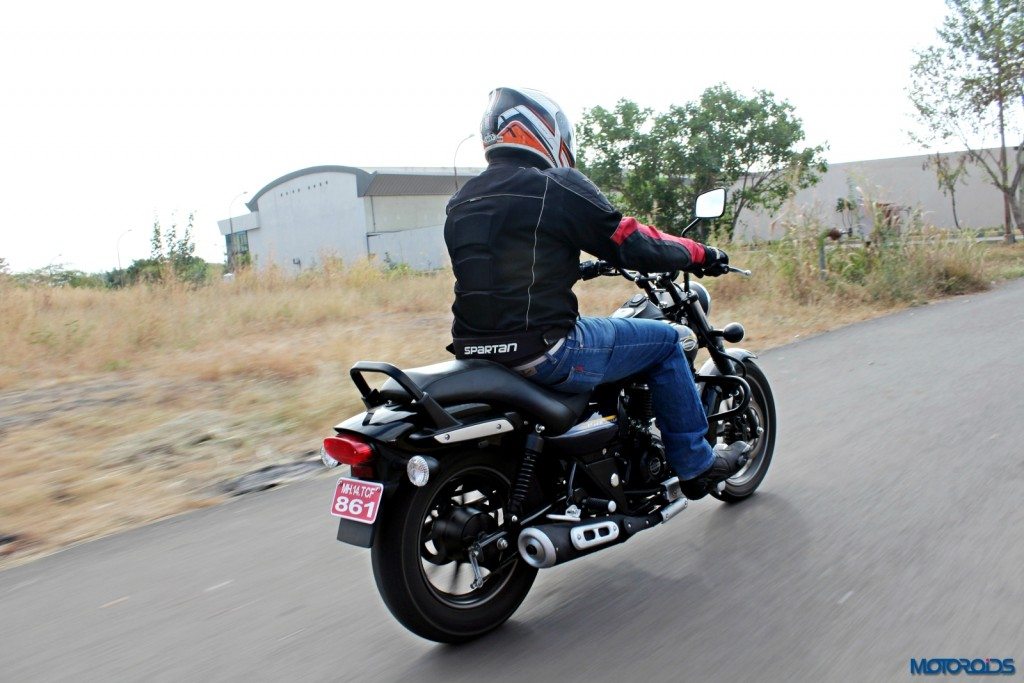 This particular engine from the pulsar clan distinguishes the feel and performance of the Street 150 from the other previous and current Avengers. As mentioned before, the Pulsar engine has been re-tuned to provide the Street 150 with up to 10% higher torque in the mid range, and it does somewhat reflect in the way it rides. The engine comes tied to a five speed gearbox. The Street 150 carries better NVH characteristics, feels more refined (than the 220s) and has a revvier, smoother note as compared to the gruff sound the bigger engine emanates. 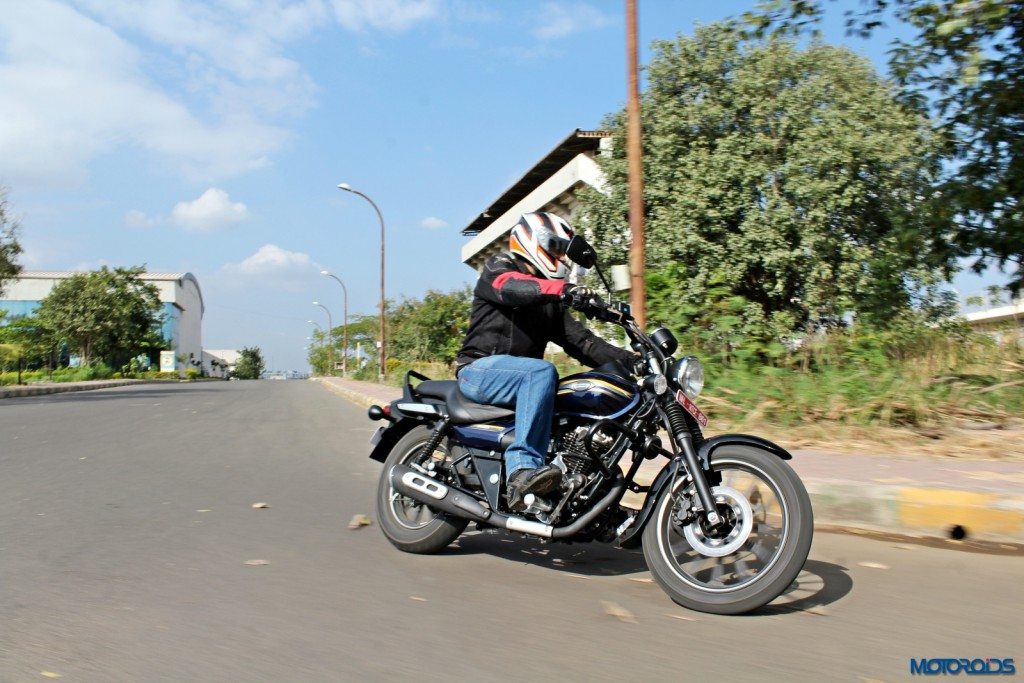 Throttle response is crisp, thanks to an improved CDI, and the gearshifts feel light and positive too. At low to medium speeds and revs the Avenger feels calm and composed. Once the speedo hits the three-digit mark a little bit of rattle creeps in, and the need of more power.

The Street 150 rides on the same mechanics as Avenger Street/Cruise 220, with the suspension and tyres being the same for the trio. The only dimensional difference between the two Avenger Streets is that the Street 150 has a shorter wheelbase than the Street 220, by 10mm. Theoretically, that should endow the smaller motorcycle with better maneuverability and a shorter turning radius, though the difference is too small to be noticed in the real world. Also, the Street 150 depends on a 240mm front disc brake and a 130mm rear drum brake unit to inhibit its motion. Whereas the other Avengers are equipped with 260mm disc on the front while the rear stays the same on all. 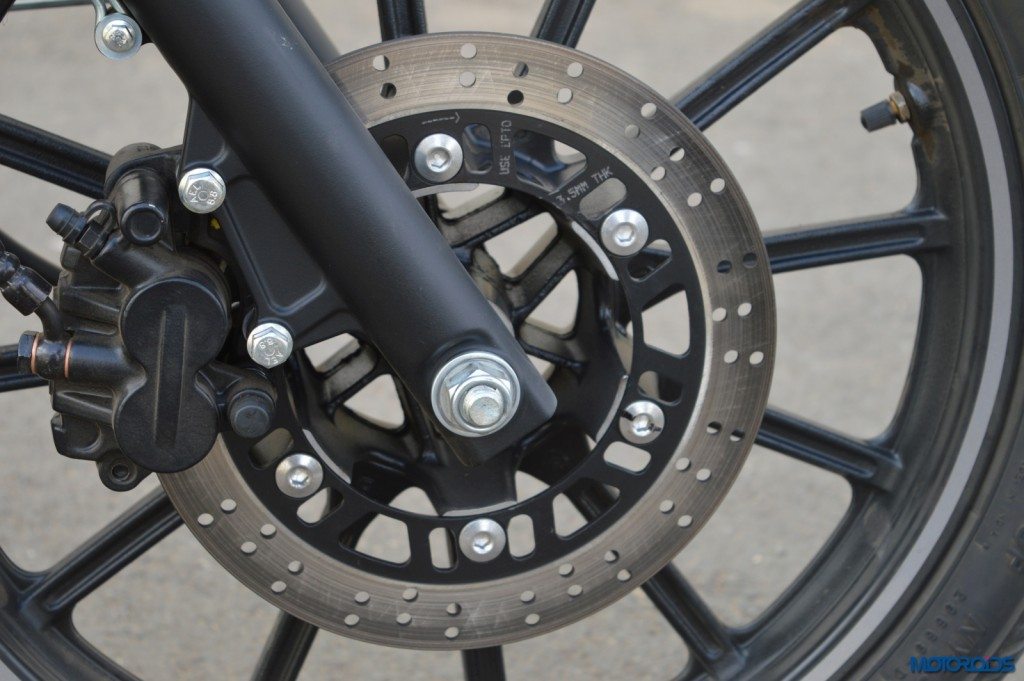 In effect, the Avenger 150 is a motorcycle which is meant strictly for city use. Sure, you have the authority to goad it to the nearest highway leading out of the city, but the motorcycle starts showing its Achilles Heel as soon as you show it the wide open stretches of tar. One good thing, though, is the relative lack of the vibes emanating out of the footpegs and seat, even at the higher rev range. 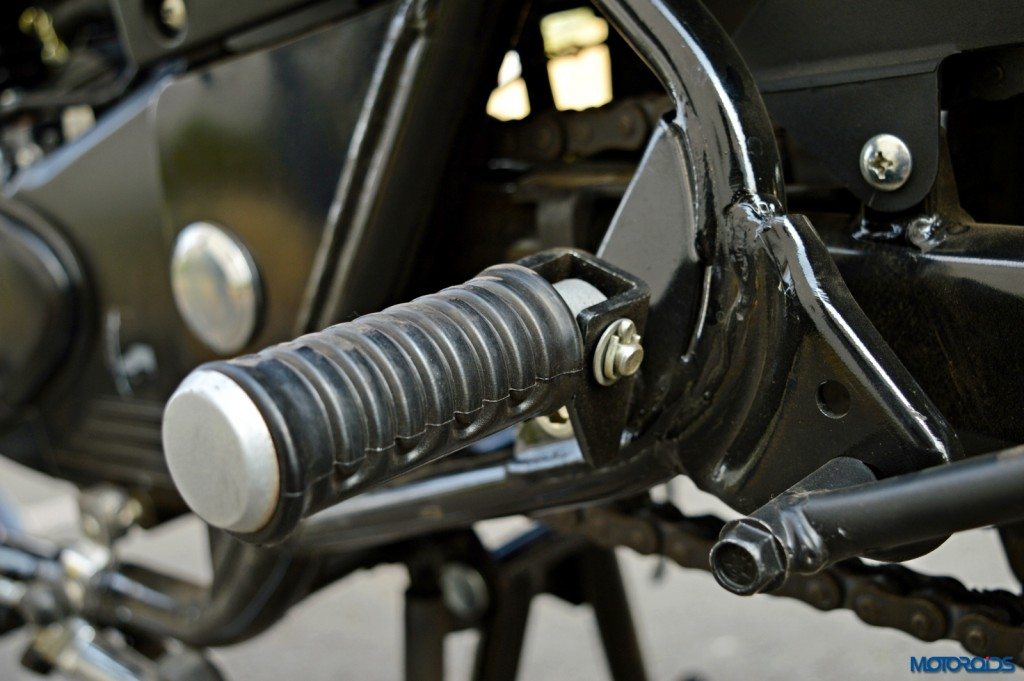 Reasonably punchy for its size in the mid range, the engine on the Avenger 150 is practical, efficient and useable. The one thing it is not is powerful – so keep it within the city confines and you’ll never have a reason to grumble.

What about the comfort and ergonomics?

The 2015 Bajaj Avenger Street 150 is suitable for city cruising, and it does a good job of it. The new engine config makes it a cruise-commuter for the city riders, a commuter bike with the comfort of a cruiser. Also the contoured seat with an increased padding of 15mm enhances rider comfort. Combined with the new Street Control handlebar, the Avenger 150 is a worthy upgrade for the ubiquitous two-wheeler commuter as it offers a better riding posture. 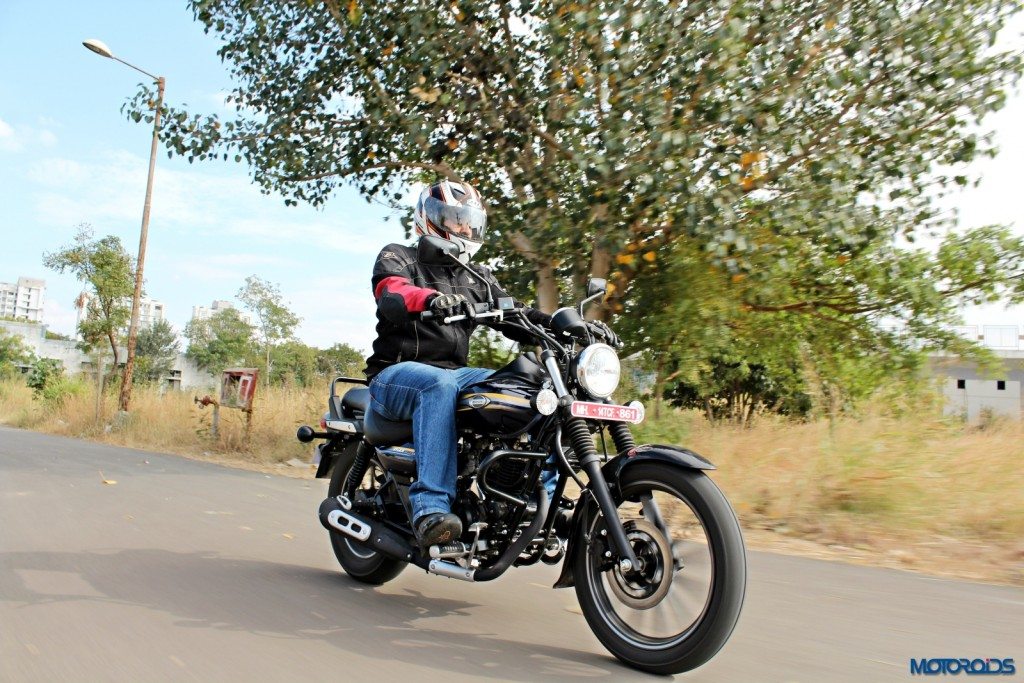 The lower and flatter handlebar provides better manoeuvrability over the crane neck bars on the Cruise, though it still can’t match the 100cc piddlers our streets are swamped with in terms of the outright capability to squeeze through fissures. The Street 150 feels nimble on road and can cruise through the city with ease. The bike will also offer a (significantly) better fuel efficiency than the Street/Cruise 220. For serious cruiser guys who like to ride distances at lazy speeds, this bike may not be the perfect companion-on-wheels. The smaller engine size, along with the lack of an oil cooling unit means that it isn’t the best, if not totally unusable tool for long-distance cruising.

The Bajaj Avenger Street 150 will be available in Midnight Blue and is priced at INR 74,000. With the Street/Cruise 220 retailing for INR 84,000 (Ex-showroom Delhi) the net savings come to about INR 10,000. A bit more, actually, when you look at the OTR prices

The 2015 Bajaj Avenger Street 150 is a well dressed package for riders who want to get their hands on a peppy cruiser for city use without having to burn a hole in their pockets. This unique offering by Bajaj in the 150cc segment will certainly attract a lot of image and budget conscious riders. Snappy ride, Cruiser looks, and most importantly – fuel economy, are the selling points of this bike. It is the cheapest and the smallest displacement cruiser bike in the market as of today. Snooty apprehensions of a purist aside, the new Avenger 150 does have a very strong business case going for it, and we do feel it will sell in great numbers.

Checkout the extensive gallery of the 2015 Bajaj Avenger Street 150