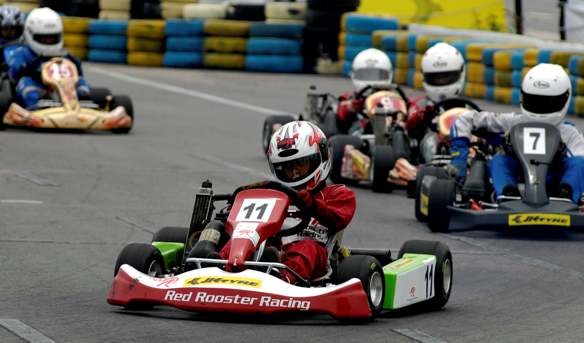 There were mixed emotions across the MMS track with the top three teams emerging victorious across categories in the first round of National Rotax Max Karting Championship in Hyderabad.

Red Rooster Racing’s Arjun Maini emerged victorious in the Junior category holding back Raj Bharath from Meco Racing. Abhirath Shetty from Red Rooster Racing did his best to pass Jehan Baruwala of Rayo Racing but had to settle with second in the Micromax category. Among the seniors, the race was dominated by Nikhil Kashyap of Amaron Pro Racing and Vishnu Prasad of Meco Racing who took first and second respectively.

This year, over 50 drivers participated across three categories of which 19 were in the senior class, 18 in junior and 13 in micromax category.

N. Leelakrishnan, Chief Technical Director at Red Rooster Racing commented on the outcome saying, “We were a bit disappointed with the outcome in the senior category as the karts developed technical glitches which restricted our driver’s performance. However, our podium finish in the Junior and Micromax category gives us enough reason to cheer and look forward to the second round.”

The Red Rooster Karting team fielded 7 drivers in all the three categories and the team were driving the 28.5 bhp Tony Karts with a top speed of 120kmph. These karts are one of the best machines in the circuit and have been specially designed and constructed by the team to provide additional stability and control.

Winning Driver Profiles:
Arjun Maini (13 years) – Winner of Junior Category
Arjun had participated in the Junior’s category of the JK Rotax Max Karting Championship in 2009. He was the National Champion in the Mini Max Category in 2007 and in 2008; he won the Kelantan Kart Prix and Elite Kart Prix in Malaysia. This made him the first Indian to win an Asian Go-Karting race in the under 12 section.

Abhirath Shetty (11years) – 2nd Place in Micromax Category
Karting since 2008 and the most promising and talented driver. In 2008 he came 4th in the championship. He is very confident and looking forward to do well this season.