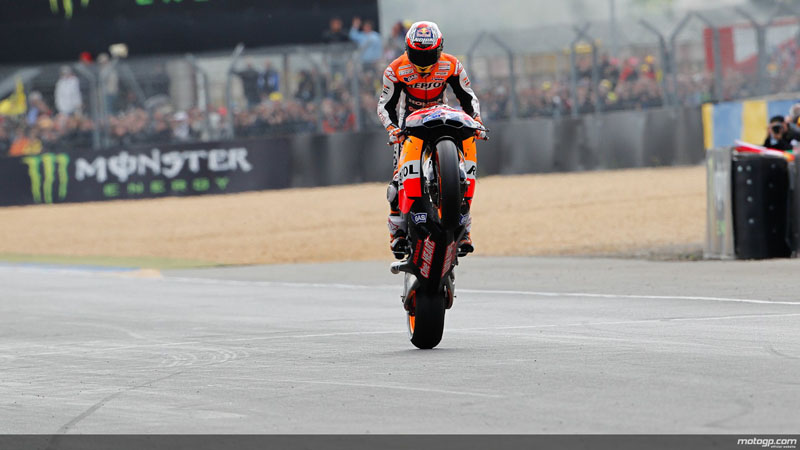 When experts talked about new Honda’s clutch giving them 0.5 sec per lap advantage, they were not joking. It became all clear at French GP the track where YAMAHA dominated in previous years that this is the year of RCV. If it wasn’t for the controversial clash between Marco Simoncelli and Dani Pedrosa then the top 4 positions would have been for Honda.  Casey Stoner won his second race of the 2011 MotoGP season with relative ease in France on Sunday, but there was plenty of drama and controversy behind him.
The Repsol Honda rider had been fastest in all track sessions at Le Mans, and his pace simply proved too much for the opposition in the race.
Team-mate Dani Pedrosa put up valiant resistance for the first ten laps, but even his challenge had died out by the midway point of the 28 laps – when the Spaniard instead turned his attention to defending second.
The threat came from Marco Simoncelli, who had dueled with World Champion Jorge in the early stages, before breaking free and hunting down Pedrosa.
The San Carlo Honda Gresini rider made his move for second on lap 18 – and disaster struck for Pedrosa as he tried to retake the position.
Pedrosa drafted past Simoncelli along the back straight, handing him the inside line as they peeled into to the following left-right Esses. Simoncelli wouldn’t surrender the position and attempted to ride around the outside of Pedrosa.
As Simoncelli came across in front of him, Pedrosa – on the tighter line – realized he was in trouble and sat his bike up, but his front wheel still hit the side of Simoncelli’s bike and he was dumped hard onto the asphalt.
Pedrosa immediately grasped his right collarbone after coming to a rest, which he is reported to have broken; dealing his title hopes a major blow. Pedrosa had been recovering from strength and numbness problems, after breaking his left collarbone in last October’s Motegi event.
Simoncelli, frequently criticized for aggressive riding, didn’t escape unscathed either: Race Direction punished the Italian with a ride-through penalty – once again denying him a debut MotoGP podium. Simoncelli rejoined in sixth, then overtook Ben Spies for fifth by the chequered flag. Winner at Le Mans for the past two years, Lorenzo had struggled to match the factory Hondas in practice – then suffered a fiery fall in warm-up. The two Italians smelt blood and finally surged past Lorenzo with four laps to go, with Simoncelli heading for pit lane soon after.
Dovizioso then made it a Repsol one-two by passing Rossi with three laps remaining.
Despite a tough start to his Ducati career, Rossi showed no signs of backing off and confirming a first ever Desmosedici rostrum and instead pushed Dovizioso right to the flag.
Stoner crossed the line a huge 14.2sec ahead of Dovizioso and has now moved ahead of Pedrosa into second in the standings; 12 points behind Lorenzo, whose fourth place on Sunday ended a seven-race run of rostrums.

Spies was ten-seconds behind his team-mate in sixth, while both satellite Tech 3 riders – Cal Crutchlow and Colin Edwards  crashed from the team’s home race. Edwards returned to finish 13th and last, while Crutchlow was forced to retire after also attempting to rejoin.
Rossi’s team-mate Nicky Hayden recorded seventh place, Simoncelli’s team-mate Hiroshi Aoyama eighth and Aspar Ducati Hector Barbera ninth. Barbera just held off Karel Abraham (Cardion AB), Toni Elias (Honda LCR) and Alvaro Bautista (Rizla Suzuki) at the flag.
Randy de Puniet, the only French rider in MotoGP, was involved in a controversial clash with Stoner in morning warm-up – for which the Australian was fined (see separate story).
de Puniet was the first of the fallers in the race, hitting the deck on lap two, team-mate Loris Capirossi later joined him on the sidelines.