Home Features Michigan to get fake city for autonomous cars

Despite the fact that the center of US car innovation has shifted toward California, Michigan carmakers are in no mood to give up. To provide automakers a proper testing facility, the University of Michigan is building a test city and highway just for automated cars. The 30-acre facility will consist of traffic lights, construction zones, and a mechanical pedestrian. This particular facility will feature daily driving conditions in a city, such as, wonky traffic lights, construction barrels, bikes, and more.

This state-of-the-art Mobility Transformation Facility will open in Southeast Michigan, right in the heart of the auto industry. The facility will simulate both – a four-lane highway and a city intersection. These two regions of driving are very different environments with their own list of dangers. After testing its autonomous cars for thousands of miles through suburban Mountain View, Google announced that it will now shift its focus on teaching its autonomous car to drive in cities. 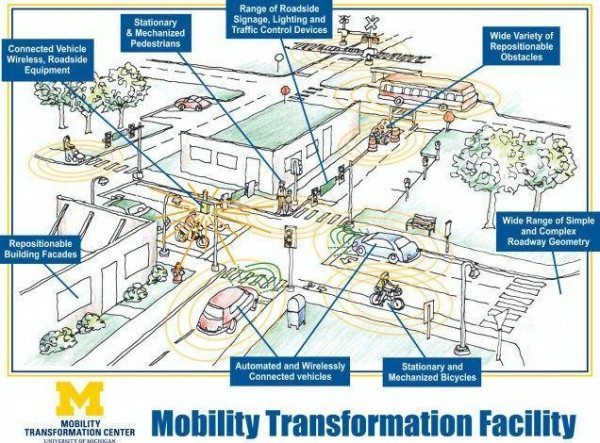 Explaining about this new facility in Michigan, Edwin Olson, an assistant professor of computer science and engineering said, “We will actually be writing code for the test facility. We’ll be able to trigger tricky traffic signal timings, or a pedestrian stepping into the intersection at just the wrong time, for example.”

Ford Fusion will be the first car to be tested at this facility and it will be soon followed by General Motors and Toyota. But one good part about this facility is that the cars would still have people sitting behind the wheel to take control of certain scenarios where autonomous cars may cause damage. One perfect example of artificial intelligence versus human intelligence is shown in the movie I, Robot movie where the robot decides to save Will Smith because his survival chances were more than that of the drowning 12-year-old girl.

The technology involved is more city centric than the vehicles. Creators of this facility envision a networked system, where cars and buildings and traffic lights can all talk to one another to keep out of gridlocks. This facility will truly be a vision of a future city.