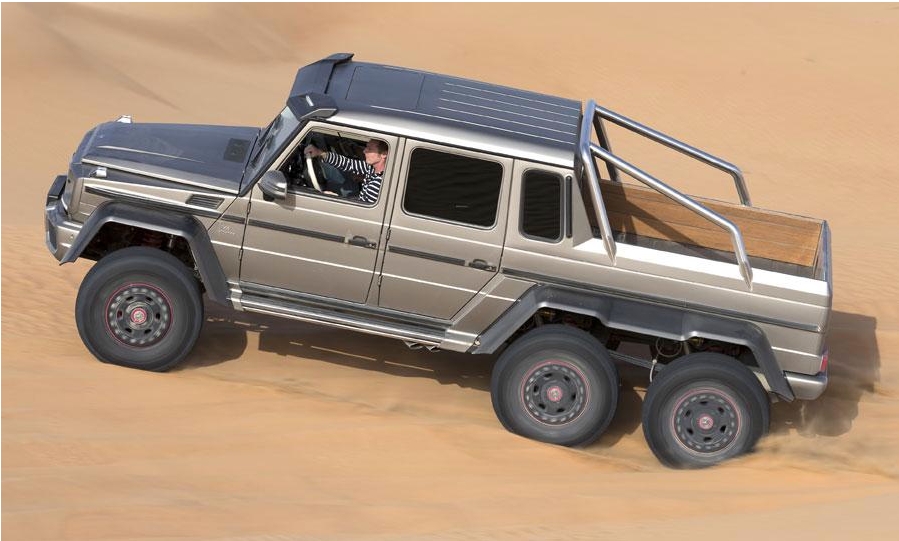 Regulars here would remember that we posted about a 6-wheeled Mercedes-Benz G63 AMG some two weeks back. The car was spotted on its way to the Middle East. Now, the official word is out that the 6 wheeled G Class AMG is going into production and will be sold to the civilians.

The confirmation comes straight from Mercedes’ head of G Class development, Alex Harries, who told media that the famous German automaker intends to produce 20 to 30 6×6 G63 AMG vehicles per year.

The G63 AMG 6×6 has been built on a special 6-wheeled military spec G320 CDI that the Stuttgart based car maker has been producing for the Australian army since 2011. The G63 AMG 6×6, which is the civilian version, gets the all wheel drive system and the five differential locks from the donor vehicle along with getting a more powerful 5.5-liter V8 motor that has a max power output of 536 HP and peak torque figure of 560 lb-ft.

The car is almost 6 meters long and Mercedes-Benz claims that the G63 AMG 6×6 can dismiss 100kmph from standstill in less than six seconds! The monster also has a top speed of 160 kmph!

The new G63 AMG 6-wheeler is expected to become the second most expensive Mercedes-Benz car after the SLS AMG. This simply means that the new variant will cost three times more than the standard G63 AMG.

Do check out the video below to see the beast in all its glory.