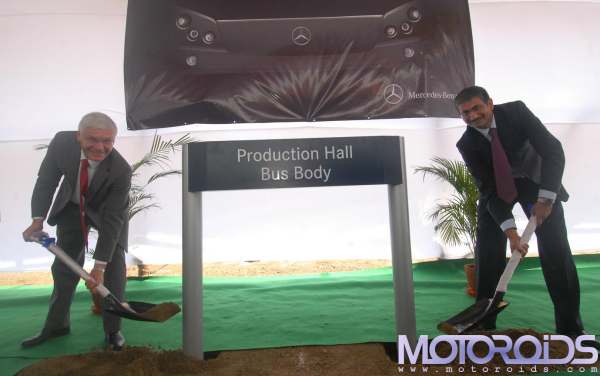 Mercedes-Benz has begun the construction of its new bus body building facility in its Chakan Plant in Pune. Dr. Wilfried Aulbur, Managing Director and CEO of Mercedes-Benz India along with Mr. Piyush Arora (Director, Technical, Mercedes-Benz India) & Mr. Srinivas Chilukuri, General Manager, Bus Sales & Marketing, Mercedes-Benz India laid the foundation stone of the new facility. The new plant will help the company build the bodies for its city buses by the second half of 2011. The market for high-end city buses is lucrative. It is estimated at approximately 500 units per annum and expected to grow by 20% each year.

The company’s Chakan plant was created with future expansion plans in mind. This new set-up comes close on the heels of M-B india announcing the foray into the city bus segment in June 2010.

Interestingly, Mercedes-Benz was the inventor of the first bus in the world and has ever since been pioneering many innovations for this form of public transport. The engagement of Mercedes-Benz with India dates back to 1954 when they started collaboration for trucks.

Dr. Wilfried Aulbur, Managing Director & CEO, Mercedes-Benz India said:  “We would now like to expand into the city buses segment, making luxury travel affordable for public transport users of the urban population. We have partnered with MCV I am confident that this new facility will enable us further consolidate our position in the commercial vehicle market by efficiently catering to our growing demand.”