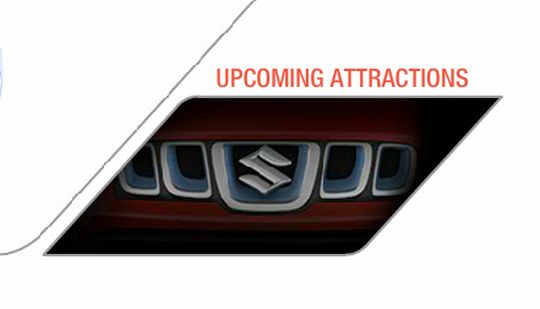 Maruti Suzuki India Ltd. (MSIL) is all set to unveil a compact SUV concept at the upcoming Delhi Auto Expo. It seems like India’s leading car manufacturer will develop a product to take on the Premier Rio and upcoming Mahindra Xylo and S101 mini-SUVs. Korean automobile giant Hyundai is also planning to showcase a compact SUV at the expo, while we will see the global premiere of the Ford EcoSport crossover. The Ford EcoSport is based on the popular Fiesta’s platform.Maruti Suzuki’s official website is displaying some teaser images labelled as ‘upcoming attractions’ and by the looks of it, they sure belong to a compact SUV concept. It may be noted that the concept SUV’s grille pays homage to the one seen on the popular Suzuki Jimny. For those who are unaware of the capable off roader, Jimny is a successor to the legendary mountain goat- the Gypsy in many international markets.

In India, Maruti has been selling the Gypsy on order and main customers include the armed and para military forces. Gypsy has a perception of being a guzzler and the lack of availability of a diesel engine has made it a lot worse. Gypsy’s successor will greet the market with an option of buying the SUV with either the technologically advanced K12 motor or the tried and tested VGT Multijet diesel engine, which might be just what the doctor has ordered.

Safely expect us to report more on this mini SUV in coming times. Stay tuned!