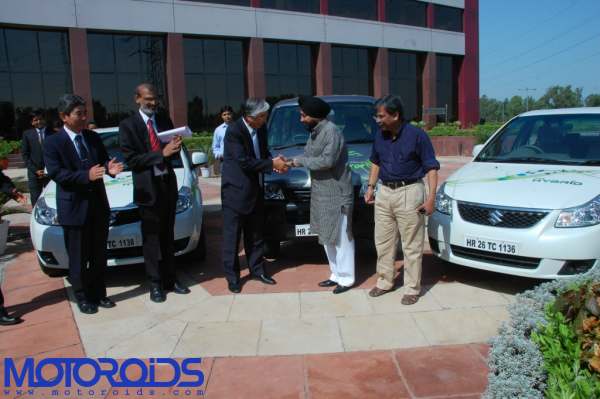 EECO Charge
‘Eeco Charge’ is a zero-emission, pure electric vehicle developed on a MPV platform. It is powered by a 50kW motor and a 24kWh Lithium-ion battery. On full charge it promises a driving range of around 100km and attains top speed of 100 km per hour. The ‘Eeco Charge’ also has the ‘Sport Mode’ for acceleration enthusiast. The battery for ‘Eeco Charge’ has been packaged under floor for better drivability and retaining ample boot space. The real time display of State of Charge and ‘Distance to Empty’ addresses user’s anxiety. The ‘Eeco Charge’ can be charged using household power source.

Go to next page to know more about government’s initiatives to promote clean energy in vehicles.

What is NHPP and MNRE
The National Hybrid Propulsion Programme (NHPP) is an initiative of the Government of India. It is a public-private partnership initiative and India’s first in hybrid technology; being jointly funded by Govt. of India and Indian Automotive OEM’s. NHPP is expected to develop awareness and generate interest in the Indian automobile market to the world of hybrids.

Considering the importance of battery technology for successful EV/HEV development, MNRE (Ministry of New and Renewable energy) has initiated a program on high energy density battery. The objective of this joint program, funded by Govt. of India & automotive OEM’s, is to carry out the local development of high energy Li-ion battery packs by battery manufactures for pure electric/ hybrid electric vehicles.
Society of Indian Automobile Manufacturers (SIAM) has formed a core group of OEM’s to take these projects forward. In this initiative SIAM functions as a nodal agency for OEM’s, component manufacturers and Government of India. In line with Phase I of the project, OEM’s are to showcase their Hybrid and Electric vehicles during Commonwealth Games  2010.