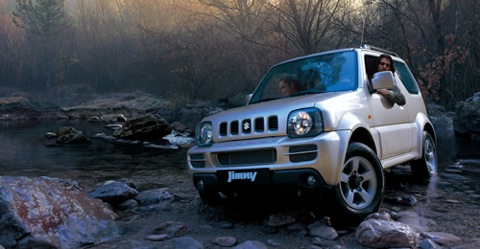 Mahindra seems to have brought the compact, hardcore SUV segment alive. While the Premier Rio tried to have a shot at the segment, although sans a 4×4 option, it didn’t quite succeed. Now reports are rife that Maruti is planning to bring the Jimny compact SUV to offer competition to the Jimny 4×4. Currently the company is making the Gypsy king only against orders, a huge chunk of which comes from the armed forces. The Jimny will be a slightly more mainstream and comfortable option for the Indian market.

The Jimny, in its original form is a two-door off-roader. With its short wheelbase and light weight it’s a potent weapon off the tar. However, for the Indian market, MSIL may just add two more doors to make it more practical.
The Jimny in its stock form comes with a 1.3-litre petrol engine, with 80 horses and 130 Nm of torque. However, for the Indian market petrol engines don’t makes much sense, especially for the SUV segment. Maruti Suzuki may just replace the petrol mill with the fab 1.3 DDiS diesel power plant, which would endow the Jimny with more than enough grunt to take on any terrain.

The cabin comfort won’t be too great, but would still be better than the Thar with a permanent roof and A/C. The Jimny also will have a filly covered cabin unlike the Thar’s open rear. The suspension is not well suited for comfort and Maruti Suzuki will probably have to make some amends if the Jimny has to make for a reasonably comfortable ride quality for families.

The discussions to bring in the car are still in the embryonic stage. The estimated price and launch timelines still far from having been finalized. We will, however, let you know as soon as we get to know more details.