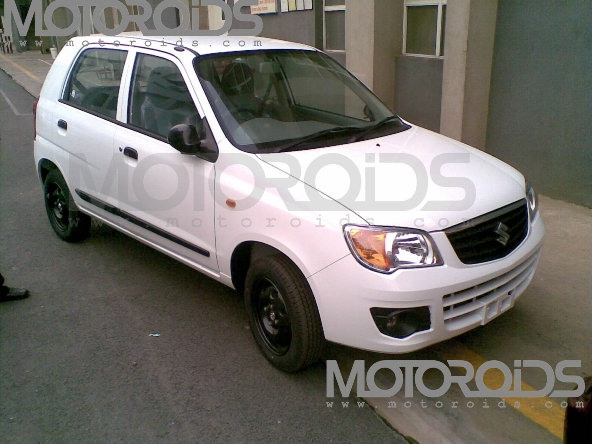 CLICK HERE for the NEW, official photos, videos, features list, prices, specs and all the related info of the Maruti Suzuki Alto K10

Just a few days ago we told you about Maruti Suzuki India readying a 1.0-litre Alto K-series so as to prepare the peppy little car for the future emission norms. Now our eagle eyed reader Hashim Tanveer has managed to click a few pictures of the to-be launched car.

As visible in the pictures, MSIL has not just plonked in a more powerful engine under the bonnet, but has given its old workhorse the much needed makeover to enhance its visual appeal. The new car is about 125mm longer than its previous version. The headlamps are slightly more extended towards the fender with a slight kink in the horizontal extension. The front bumper has also undergone minor changes, visible primarily in the form of the newly incorporated fog lamps.

The tail lamp has been redesigned, and is now a more complex, vertical unit. The tail door has undergone a slight design change as well. The wheels size too has gone up from the regular 12 inch size to bigger 13 inch.Very honestly, the small design changes aren’t very aesthetically appealing, and don’t add to the value of the car’s design from a technical point of view. However, the facelift will add some freshness and distinction from the old car, which is sure to lure some more new buyers.

The new Alto, dubbed Alto K10 is expected to be priced be priced around Rs. 30,000 more than the 800cc version. There isn’t much differ4ence between the two cars except that the Alto K10 will get slightly tuned suspension to handle the extra power, a cable actuated transmission system and booster assisted brakes.

The new Alto K10 is not just more powerful than the old Alto at 68PS (against 47PS of the earlier car), but is also more fuel efficient according to ARAI rating. The K10 will travel 20.2km on every litre of fuel against 19.73 kmpl delivered by the earlier version. The car will be substantially faster in its 0-100 km sprint (expect a timing of around 13 seconds) and will have a much better top speed as well. We just hope that the humble Alto’s unerpinnings are able to take the extra power when thrown around corners.

From the inside, the Alto K10 gets a two-tone treatment, and has now borrowed the 3-spoke steering wheel from the A-star.  The seats have changed slightly too with front and rear passengers now getting integrated headrests like the Hyundai i10. The instrument panel too is new, with changes made to the speedo unit and the backlights. The new cars also features goodies like power windows, internally adjustable ORVMs, power steering and a key alarm which lets you know if you leave the key inside.  The new car will be launched in two variants – LXi and VXi and will be available in six colours.

Even though it’s not an entirely new car, the Alto, in its new avatar offers a lot of valure, and at an additional 30,000 rupees, doesn’t look like a bad deal at all. The light weight of the car, along with the healthy power rating should make it a fun-to-drive car as well. We are looking eagerly to put ourselves behind the steering wheels of this new machines. Stay tuned for a first drive report sooner than you think.