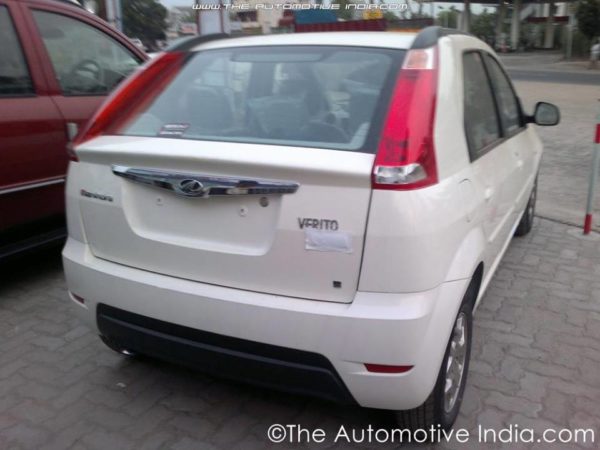 Regulars here would know that we have been regular with posting updates about the upcoming Mahindra Verito Vibe hatchback. Those following our updates would know that we were among the very firsts to report when first-ever pics of an undisguised Verito Vibe test mule surfaced on the web world and rendered us all speechless with disbelief. These pics revealed that the car would have an exterior styling that could take time to grow on people. Much of this can be attributed to unusually wide C pillars that don’t let rear-end design win any design contests. Our belief is that the car looks like a hastily truncated version of the Verito sedan.

There are some who believe that the good folks at Mahindra could have looked at the Ford Focus for design inspiration. Whatever the case might be, it is really easy to guess that there is going to be a divided opinion on the rear end design.

The Verito Vibe will be a Maruti Suzuki Swift and Hyundai i20 adversary and the first ever B segment hatchback from Mahindra will  be launched on June 5. The latest update is that Mahindra dealerships across the country have started receiving first batch of Verito Vibe cars. Seen here is a pic of the upcoming hatchback at the New Delhi dealership. We expect that the car will be promoted as entirely new car instead of a variant of the Verito.

The Verito Vibe hatchback could be priced in the vicinity of INR 5.5-6 lakhs. Powering the Verito Vibe will be the tried and tested 1.5 litre Renault K9K diesel engine that powers many cars in our market.