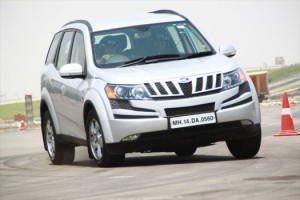 The 4 wheeler commercial segment which includes the passenger and load vehicles registered a 10% growth, having sold 14414 units, while the 3 wheeler segment clocked 4036 units in April 2013. Exports for the month of April 2013 stood at 1530 units, a growth of 8%.

Pravin Shah, Chief Executive, Automotive Division, Mahindra & Mahindra Ltd. said, “We are extremely disappointed that the additional 3% excise duty on SUVs has not been reversed in the Finance Bill, which would have brought about some cheer and momentum for SUV makers and provided them with a level playing field. We remain cautiously optimistic of the current situation and do hope that with the much awaited and needed reduction in interest rates announcement by the RBI next week, the auto industry will look up. At Mahindra, we hope to create excitement with the launch of the Verito Vibe and other product variants”.