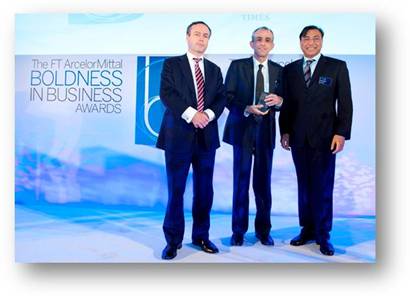 Mahindra Group has received the Financial Times Arcelor Mittal ‘Boldness in Business’ Award for 2013, in the ‘Emerging Markets’ category.

The guest speaker at the event was Mr. Boris Johnson, the Mayor of London.

“This is a proud moment for all of us at the Mahindra Group as this award recognizes our success in establishing a global footprint. Today, we are the world’s No. 1 tractor manufacturer in terms of volumes, and our SUVs & Pick-Ups have blazed a trail across the world. Over the next decade, we aim to emerge as one the Top 50 most admired global brands, and this award is testimony to our efforts,” said Ruzbeh.

In his acceptance speech, Ruzbeh spoke about ‘Redefining Sustainable Urbanization’ as a core theme that spans the Group. In this context, he mentioned that the Mahindra Group’s Auto Business is working towards co-imagining and co-creating the ‘Future of Mobility’ with its customers and our Mahindra Reva is taking the lead in this endeavour. He also spoke about the launch of the e2o in Delhi last week.

Lionel Barber, editor of the Financial Times, said, “Against a backdrop of imbalances between the debt-ridden west and nations with surpluses in the east, this year’s winners have demonstrated courageous and decisive risk-taking in the spirit of entrepreneurialism and innovation.”

This was the fifth edition of the FinancialTimes ArcelorMittal Boldness in Business Awards which have established themselves as the premier accolade in their category, thanks to their global reach and the impressive credentials of its judging panel.

The awards featured candidates from Europe, North and South America, the Middle East and Asia-Pacific. Winners are selected by a panel of experts including Lionel Barber, Editor of the Financial Times and Lakshmi Mittal, Chairman & Chief Executive of ArcelorMittal, who base their decision on a short-list drawn up by the FT’s global network of bureau chiefs and senior journalists.
Previous award winners include Alan Mulally of Ford, Sergio Marchionne, who has driven the turnround at Fiat and Chrysler; the innovators at Apple, Twitter, Google and Groupon; the intrepid explorers at Tullow Oil; Vale, the Brazilian mining giant; and Huawei, the telecoms group; and Suntech, the solar energy pioneers, both from China.