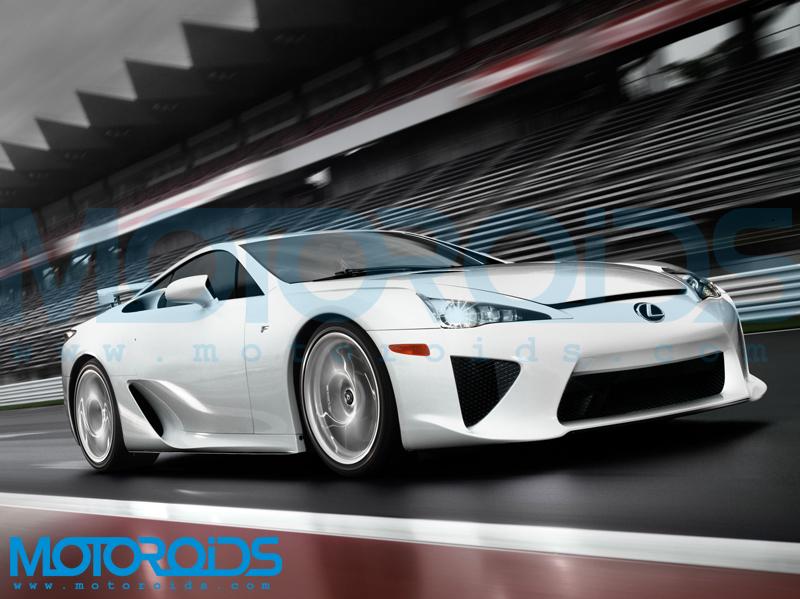 The LF-A project is crucial to Toyota. With the new Lexus supercar, Toyota want to inject some life into their otherwise rather drab car lineup comprising of unexciting cars. Toyota cars invariably turn out to be incomparable exponents of mechanical precision, durability and boredom. The LF-A is an ambitious project, and with a 4.8 litre V10 engine producing 552 horses, it’s a seriously fast supercar. Toyota would like to think that on paper the new Lexus is in the league of the Ferraris, Lamborghinis AND the GT-R’s of this world. They’d say that it’s been rammed tight with expensive carbon fiber to keep the weight light and incorporates technology that costs the sun, the moon, Mercury and all the planets you come across till you reach Pluto.

Only 400 pieces of this automotive extremity will ever be produced and Toyota will register losses on every unit made – such is the amount of investment the Japanese company has made in this project. Company’s new president Akio Toyoda (from the family that started the Toyota brand) is an avid car enthusiast himself, and has taken personal interest in the project. Getting those massive bills for R&D and testing shouldn’t really have been a problem for Toyota engineers then.

So how good is the new Lexus expected to be? Toyota is quoting a price of $375,000 a piece. Convert the amount into Indian rupees and you are looking at a figure of Rs 1.9 crore. That’s more than some of the best Ferraris and well within the territory of the most exclusive Lamborghinis. For a brand which is giving its first shot to a supercar, we’re afraid that’s a little too much to ask for. Just because it’s the first time you are making a supercar, and the lack of expertise has cost you a lot of money, doesn’t mean that you can put an obscene price tag on your product, and expect the customers to pay for your gain in experience. We are more than sure the LF-A will have its set of lacunae (and quite a few of them), owing to Toyota’s newness to the performance world. Italian supercars have the heritage, the following and the finesse to command their high price. It’s stupid for a brand to think of joining the club overnight. Toyota should try and match the GT-R first, which has demolished almost every supercar in the world on the performance front, and still very humbly kept the prices at where they should be. The brand has earned a lot of respect AND fans for the act. Toyota must take a leaf from Nissan’s book.

Some of the better known international journos have been allowed a spin in the new supercar, and even though they are impressed by the performance, their reviews suggest that they don’t think the car is quite in the league of the top performing Italian, German and even Japanese machines. Each one of them is amazed at Toyota’s audacity and optimism taking into view the $375000 price tag.

We hope the car fares well, when it is pitted head to head against it rivals. And we are sure it won’t, for the Nissan GT-R is faster on paper even if we go by Toyota’s books. We don’t even have to mention how fast (and inexpensive) the Nissan is in the real world. All we can do is wish the Japanese manufacturer and the 400 people (yes, we are damn sure all of them will get sold) who buy the new supercar luck!