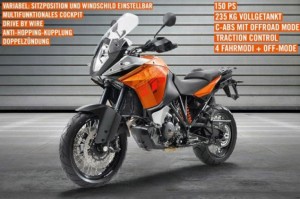 This is allegedly the first official image of the all-new KTM 1190 Adventure. The image was apparently published on the company’s official website for a while, where it was duly downloaded by the auto journalists, after which it was taken off air. The new bike will officially be unveiled at the Cologne Show on October 2nd.

The 1190 Adventure features an engine which is a modification of the RC8’s V twin unit. With the changed specs, the engine dishes out a scorching 150 bhp of power. With a weight of 235 kg, The bike boasts features such as ride-by-wire tech, multi function instrumentation, variable engine maps, C-ABS with an optimized mode off-roading and traction control. You can adjust the seat and windscreen to your choice.

According to some insider reports, the new engine is far superior in terms of refinement and mid-range performance when compared with RC8’s gruff unit. Stay tune for more details soon.