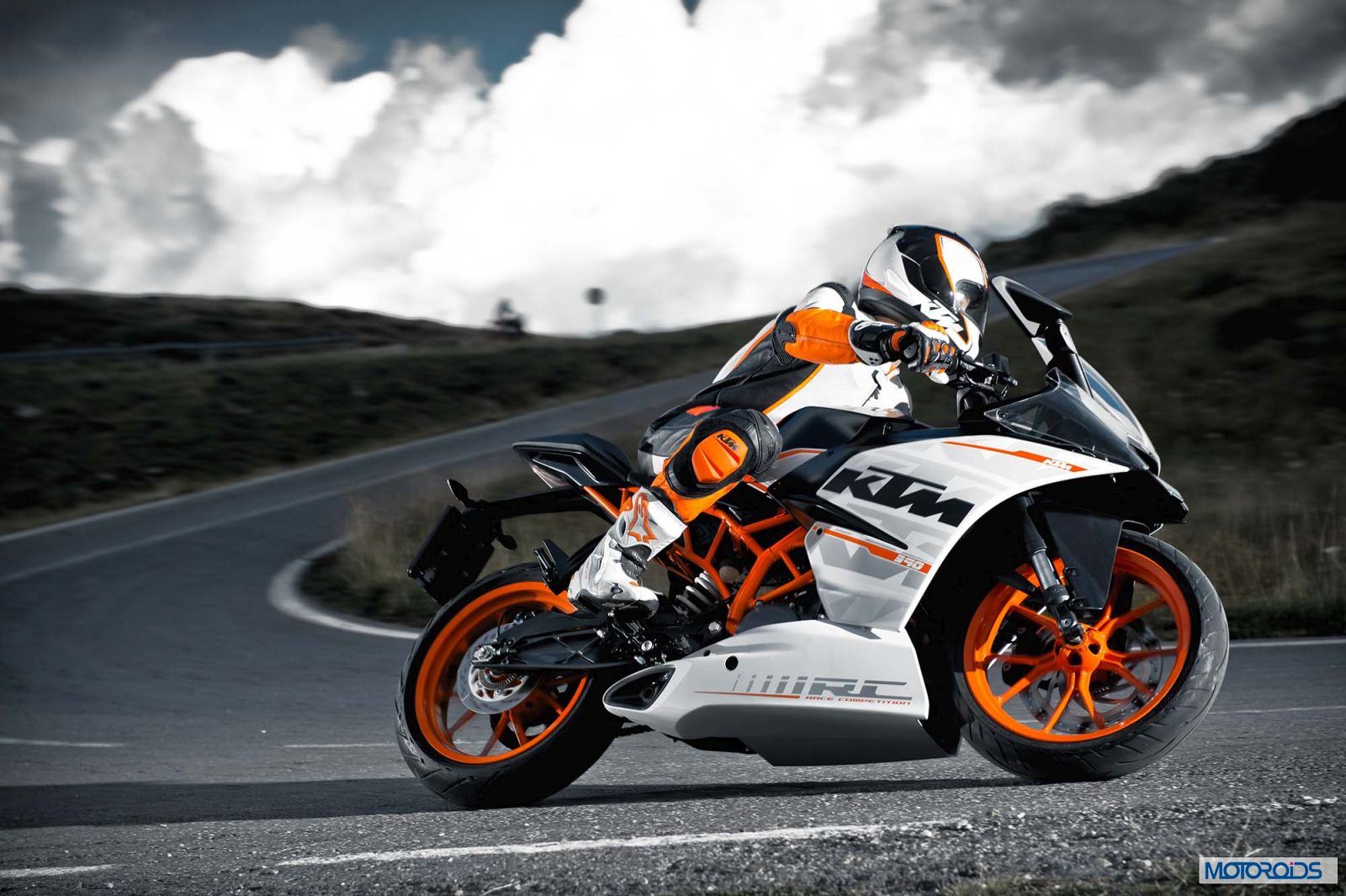 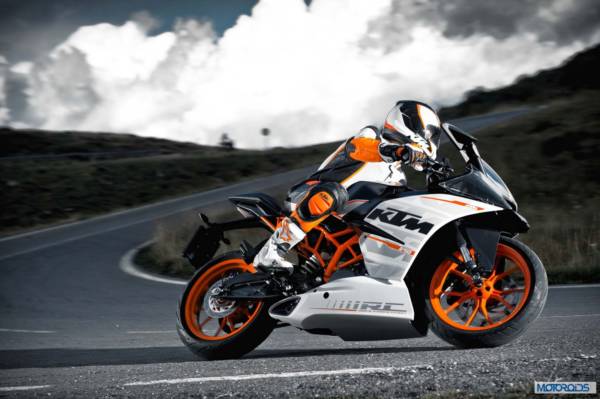 KTM RC390, the most anticipated motorcycle of the year 2014 has finally been launched, and what we have here is a detailed first look review of the machine. The RC 390, just like its unfaired Duke 390 sibling, has managed to solve the performance – price conundrum in the complicated Indian market with aplomb. Add to its incredible value the fully faired styling, much loved by us Indians, and the RC should manage to do much better numbers than the Duke. So what, apart from the fairing are the changes incorporated in the RC 390 over the Duke? Does it go faster? Does the buyer get any extra equipment for the extra price? Who should buy which one of the two? We try to answer every query you have here in this detailed report

KTM has not tinkered with the lovely engine and transmission setup of the Duke 390 for the RC. So the power and torque figures from the 373.2cc engine remain unchanged at 43bhp (9500 rpm) and 35 Nm of peak torque produced at 7250 rpm. The engine is mated to the same 6 speed shifter which does duty on the Duke 390. 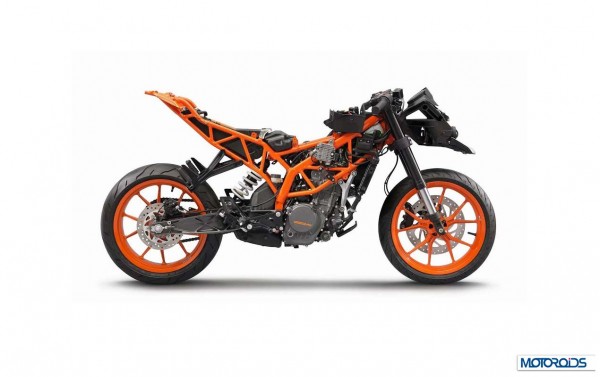 Now since the engine has not been touched at all, the revvy character of the engine should remain similar to the Duke as well. It’s got a decent mid-range punch with the real torrent of power gushing in after 7000 revs. With peak power being produced at 9500 rpm, which isn’t too far away from 7000 rpm, it would be safe to call the RC 390, just like the Duke, a relatively peaky machine.

This KTM engine is incredibly revvy and powerful for a single cylinder unit. Sure, the aural delights do not quite match the music offered by the twin and quad pot mills, but the engine sure packs a punch.

Top speed of the bike is close to 180 kmph (slightly faster than the Duke), which should be fast enough to help you travel very swiftly by any standards in India. The extra weight of 8 kg should have a negligible effect on performance. One can expect the acceleration and top speed of the RC390 and the KTM Duke to be similar for all practical purposes. The RC should be able to pull a slightly better lap time than the Duke around a track owing to its sporty inclinations though. 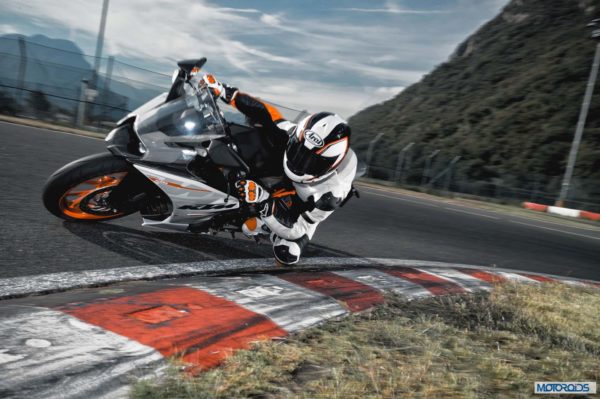 Being a sporty machine with track-oriented intentions the riding stance of the RC390 is much more aggressive than the Duke. The clip-ons are placed lower and require the rider to crouch. What this means is a relatively inconvenient riding posture as compared with the Duke, at least for the average Joe. The seat on the RC390 is positioned slightly higher than its Duke counterpart, with the rear-sets also having been positioned higher and further aft. The more aggressive riding position should put more pressure on the wrists and shoulders initially, but after a few long-ish ride, the body should get acclimatized and offer more comfort to the lower back, with a good portion to the weight having been shared by the front limbs.

The high-placed pillion seat seems uncomfortably positioned, and should not be a good place to be for medium to long distance rides. There is a neatly incorporated prominent crease between the two seats for the pillion rider to brace himself. It wouldn’t help much though. 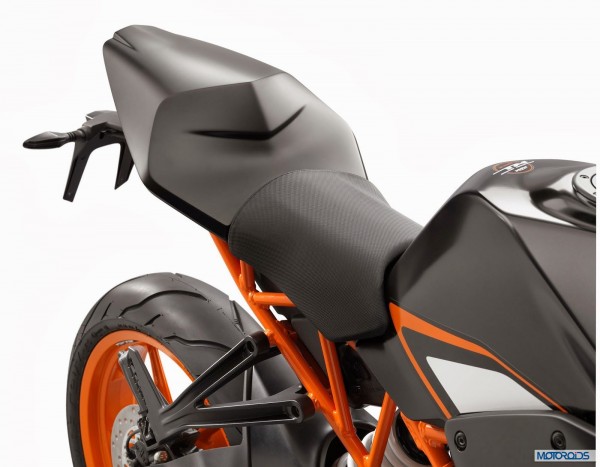 The shape of the tank has been changed to accommodate the faired styling, and the storage capacity on the RC is now down to 10 litres.

In the Indian context, even with a more aggressive riding stance, the RC390 seems to be making more sense thanks to the people’s affinity to fully faired bikes in the premium segment. Secondly, the ground clearance of the RC390 is also better than the KTM 390 Duke, which should help the bike negotiate the Indian road conditions better. The suspension is also expected to be slightly softer than the stiffly sprung Duke – at least we believe it should be if KTM Bajaj have listened to their customers carefully in the past one year. 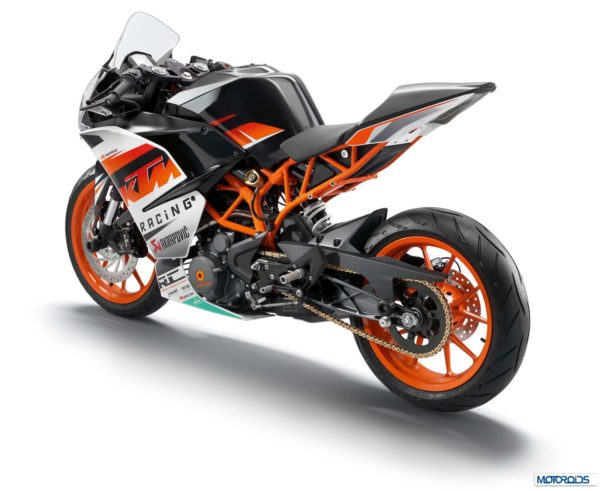 The RC390 shares its platform with the Duke, however, some changes have been made to suit the sporty stance and the track oriented character of the machine. The wheelbase of the RC390 is 8.5 mm shorter than the Duke and should help the RC turn in and change direction more quickly, especially in the aggressive setting of a racetrack where you need to lean and pick up the bike more quickly.  The rake angle up front has also been reduced to make the bike more flickable.

Another important change is the reduction in the front suspension travel on the 43mm dia upside down front suspension to help it accommodate the increased weight up front from the heavier fairing and rider’s body (thanks to the front forward stance) better.

The projector lamp up front should ensure better illumination in the night. Some changes have been made to the bike’s electrical systems as well for the new lighting system.

The wheel and tyres specs and design for the RC390 and Duke 390 remain exactly the same. The 10 spoke alloys and the grippy Metzeler tyres have been carried over from the 390 Duke. Brake and gear pedals, unlike the Duke 390 are forged, not cast.

Overall, there shouldn’t be any drastic difference in the RC390’s acceleration and top speed figures as compared with the Duke. With the changes made in the riding stance, wheelbase and front suspension, though, the RC should be able to pull a slight advantage over the Duke around a racetrack though. We cannot be conclusive about this though.

Next page for styling, buying advice, price and tech specs>>>