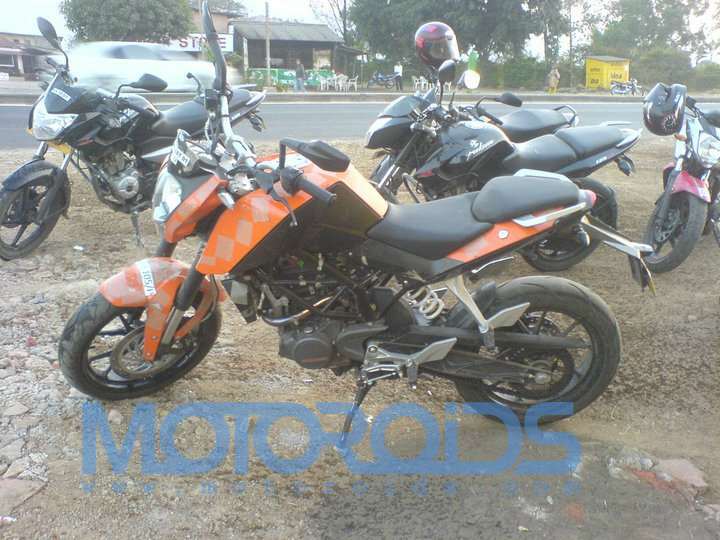 I remember how very excited I was while walking into hall no. 18 at the Delhi Auto Expo 2012. With dreams of ogling at the KTM Duke 200, I searched for the Bajaj stall. Imagine the disappointment when all that was seen is the just launched Bajaj RE60. Neither was there any hint of KTM or next generation Pulsar nor the remaining line up of Bajaj motorcycles.

However, we knew that the baby Duke will be unveiled sooner than later. It may be noted that we recently saw Bajaj Auto re-branding all its Pro biking showrooms to KTM inspired showrooms. Apart from this, we also saw Mr.Rajiv Bajaj in KTM branded clothing at the unveiling ceremony of RE 60 four wheeler . As if all this was not enough to give us a hint about the fast approaching launch, Bajaj Auto has also included KTM link and KTM page on its website. Bajaj Auto is now all set to launch the Duke 200 on 24th January, 2012 at Delhi.

The Duke 200 has been jointly developed by Bajaj Auto and popular Austrian manufacturer KTM. The bike is produced at Bajaj’s Chakan plant along with the export only Duke 125.It may be noted that Bajaj Auto has as much as 40% stake in KTM. The entire nation is eagerly waiting for the Duke 200 to be launched and the bike is expected to come with a price tag of Rs.1.2 -1.4 lacs.

Safely expect to see next gen Pulsar following the KTM Duke 200 launch.And this is not all as the Pulsar launch will be followed by launch of an all new Bajaj motorcycle.