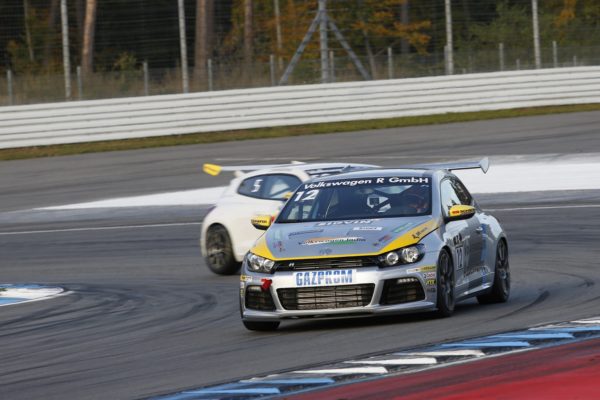 Scirocco R-Cup 2013 season ended with an exciting race as Hockenheim played the host for the second time in the year. 17-year old Kelvin van der Linde demonstrated exceptional talent by winning the race after starting 5th on the grid. A 12thplace or better finish is all that the South African driver required to clinch the Scirocco R-Cup title who had started the last race of the season with a lead of 41 points over his closest rival Kasper Jensen. Kelvin made quick moves in the first two laps to get into the 3rd place. On lap seven, race leader Denis Trebing was penalized with a drive-through for cutting the track, which promoted Kelvin into the second spot automatically. From there, he decided to go for a win and after a fair battle with pole-setter Matthias Bäurle, he finally managed to get into the lead position on lap eight. Then onwards, Kelvin defended his position to win the fifth race of the season and clinched the title in style.

India’s Sandeep Kumar qualified 23rdon the grid with a fastest lap time of 1:59.760 minutes. Apart from overtaking guest driver Felix Baumgartner on lap four, Sandeep’s race was more or less action-free and he managed to finish the race in 18th position, owing to a few retirements ahead of him. Amongst the Junior-Cup drivers, Sandeep finished this season’s last race in eighth position. With 26 points to his credit, Sandeep concluded the Junior-Cup in 11th position. Commenting at the end of the season, Sandeep said, “It has been an enriching experience at Scirocco R-Cup. The cars are fast yet forgiving and teach a lot to newcomers like me. It wasn’t an easy season and there is still a lot more to learn. This year was more about coming to the new tracks, learning them, understanding the behavior of the car and getting used to the fierce International competition that the series put on the table. I am extremely thankful to Volkswagen Motorsport India for giving me the opportunity to come to Germany and race in one the most important single make series that has proved to be an essential stepping stone for many successful racing drivers.”