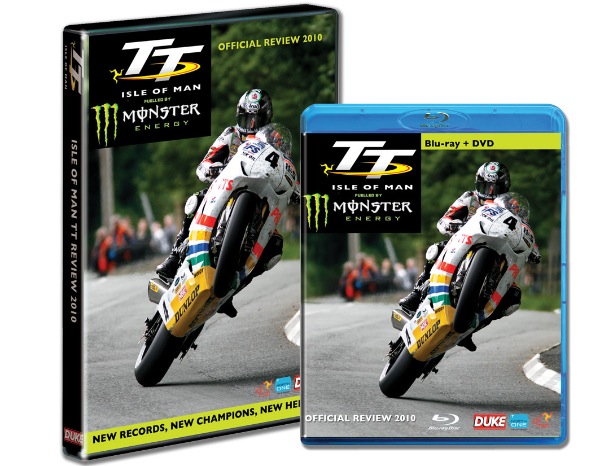 The 2010 Isle of Man TT was a spectacular festival of speed and stunning racing and now fans can enjoy it all over again in breathtaking high definition.Duke is once again releasing the Official Review on the Blu-ray format alongside the standard DVD format, offering an exceptional viewing experience.
The Blu-ray format makes full use of North One Television’s critically-acclaimed coverage. The entire 2010 event was filmed with high definition cameras, including for the first time the on-bike sequences, and the Blu-ray format lets viewers unlock the true potential of HD. The ultra slow-motion sequences, which show the extreme stresses and strains the riders and machines are subjected to as they negotiate the legendary Mountain course, are simply jaw-dropping in HD.
With extensive coverage of Practice Week, the five solo races, both sidecar races and the new clean emissions TT Zero event for electric bikes, the Official Review is the definitive story of one of motorsport’s greatest events. In addition to edge-of-the-seat race action as the bikes reach up to 190mph blasting around the legendary Mountain Course just inches from walls, houses and hedges, the TT DVD features white-knuckle on-bike footage, informed commentary, rider interviews, behind-the-scenes access and special features.
Watch the preview below of the Official Review 2010:
News
,
Comments
Leave a Reply Cancel reply