Home Hero MotoCorp Is this the rumoured Hero Karizma ZMR 250? 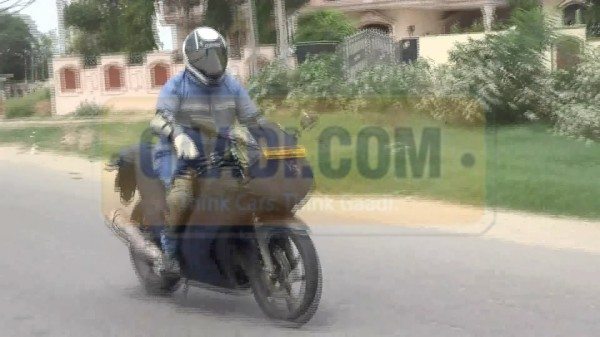 Only a few minutes back, we reported that rumours are afloat that Hero Motocorp, world’s largest selling bike maker, could be busy with the development of a larger, 250cc motorcycle that might go on sale with the Karizma ZMR moniker. Rumoured to make its debut at the 2014 Delhi Auto Expo, the upcoming bike could sport an EBR-AVL developed motor, which is being speculated to have a power figure in vicinity of 29 PS.

While many of our friends asked us to include a fistful of salt to this rumour, here we have a video and many spy pics of an upcoming Hero bike that could be powered by a 223cc-plus engine and will have a full fairing, a la Honda CBR250.

The bike was spotted testing near Hero MotoCorp’s Dharuhera plant and from what we can make out, the bike sports a styling that is definitely related to that of the current Karizma ZMR. However, the bike does look bigger and heavier when viewed in profile. In typical Hero manner, the bike sports tires which can be best described as ‘skinny’ (Hero Karizma and ZMR owners would know what I mean. *winks) . The bike would come with split seats! (finally!)

As we said above, the bike would be powered by a 250cc motor that would have about 29PS of power. As is obvious, the engine would be a single cylinder, liquid cooled and fuel injected.

It is being said that the test mules seemed to be pretty relaxed even when cruising at triple digit speeds. Our guess is that the bike would have a true top speed of around 150kmph and would have performance figures similar to those of the Honda CBR250R. The upcoming Hero flagship is expected to come with a price tag of around INR 1.4 lakhs. Enough to make Bajaj Auto Ltd quicken the development of the Pulsar 375? Definitely! Unfortunately the wheels still look 18 inchers and no monoshock yet!