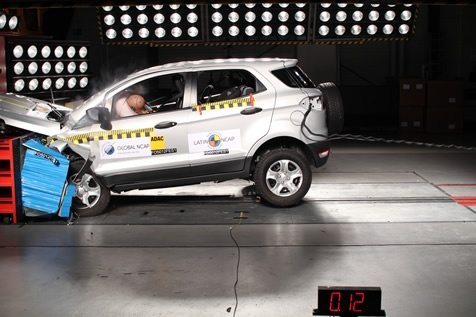 The Ford EcoSport compact crossover has to be among the most awaited cars in India. While the EcoSport is still some time away from entering our fast developing market, the car is already on sale in many countries and has garnered a lot of rave reviews.

While everyone has talked a lot about the latest Ford compact SUV’s design and EcoBoost engine, not much has been said about the new car’s safety quotient. There is not an iota of doubt on the fact that the EcoSport is as safe as most of the modern day cars in its segment but we still need a proper yardstick to accurately judge the safety measure of the car.

Latin-NCAP says that the EcoSport provides sufficient protection to the head and torso of the front passengers but offers only marginal protection to the knees. The car offers good restriction to the forward movement of a 3 year old in a forward facing child seat. A high chest deceleration was observed in 18 month old kid.

The Ford EcoSport that was subjected to the tests was equipped with dual airbags and ABS. India spec EcoSport too is expected to come with similar levels of safety equipment. The Europe spec car might fare better in NCAP as it is equipped with multiple airbags.