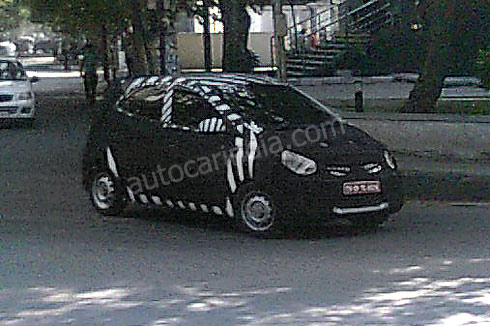 What you see here are the spy pictures of Hyundai HA, the Korean carmaker’s Alto and Nano challenger. Hyundai, ever since the advent of the Nano has been working on a product which could be more than a match for not just the Tata small car, but for the country’s largest selling car, the Alto as well. Hyundai plans to price their new contender slightly below the Alto, and drill a big hole in the company’s sales reservoir. Who knows, the HA may just become the next big rage. After all, every buyer wants more option before settling for an Alto. The HA, with a modern design, and hopefully a better package may just herald a new revolution in the Indian small car segment.

The new small car, codenamed HA according to other sources on the internet, will in all probability bear the signature Hyundai Fluidic Sculpture design philosophy. The Hexagonal grille has been a standard feature on all new Hyundai cars, and we are more than sure that the family grille will make it to the new car as well.

Hyundai may employ a three cylinder version of the Santro’s 1.1-litre engine in the HA, with power output of close to 50PS. We, however, cannot be sure if Hyundai have developed an all-new engine for their new car to beat market expectation by a good margin.

While we don’t have any further details about the car yet, the overall dimensions of the car in the spy pictures clicked by ACI suggest a fairly roomy cabin, which should definitely be more spacious than the Alto. The windows peeping out if the camouflage suggest sporty styling, although the tapered and sporty styling would bereave the cabin from a sense of airiness. Behind the test driver, who looks quite agitated on his car being snapped, we can have a good view of the HA’s headlamp, which seem to have taken some design cues from the i10.

All in all, the new Hyundai looks really promising going by the spy pictures. We are quite sure, that if Hyundai manage to price it well, it has the potential of taking the entry level car market by storm. The car will be launched in the second half of 2011, and we are sure that once it takes off, it would be difficult for Maruti to protect its 50 percent market share.