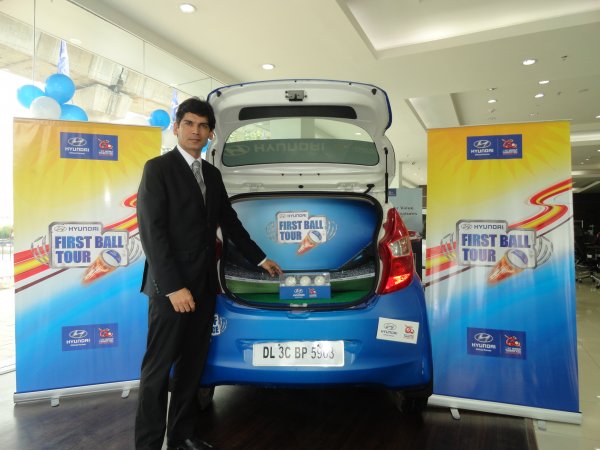 Hyundai Motor India Limited (HMIL) today showcased the ‘First Ball’ for ICC World Twenty20, 2012. As we earlier reported, Hyundai, which is the Official Partner of ICC, plans to host various consumer-engagement initiatives for the upcoming ICC Twenty20 World Cup. The ball which has been showcased today will be used in the first match of the ICC World Twenty20 on September 18, 2012 in Sri Lanka.

Mr. B S Seo, MD & CEO, HMIL, said, “The ICC World Twenty20, 2012 is a great opportunity for us to combine a nation’s passion with Hyundai’s commitment to the sport. We are delighted to be associated with ICC as official partner till 2015. With the showcase of the ‘First Ball’ for ICC World Twenty20, we aim to reach out to our customers and provide them with an unmatched experience and at the same time build up the momentum for this landmark cricketing event.”

The first cricket ball was showcased in 6 cities – New Delhi, Mumbai, Chennai, Hyderabad, Ahmedabad and Lucknow. The cricket balls were displayed in specially branded Eon. Special activities were organized at the dealership locations, which included games and quizzes on cricket trivia, contests on juggling balls, and a special graffiti wall where fans were able to pen their thoughts and cheer for their favourite teams and players. The preview was organised at select Hyundai dealerships from September 6- 9, 2012.