The Hyundai Creta (erstwhile ix25) has been one of the most anticipated cars in India. It is sketched around Hyundai’s Fluidic Sculpture 2.0 design philosophy. Hyundai has been focussing on giving the Creta an SUV-like appearance and stance. This comes through in the design renderings released by the Korean carmaker.

According to Hyundai, design of the Creta compact SUV gets a bold front fascia, voluminous sides and a sporty rear. These design elements are accentuated by the Creta’s singular hexagonal front grille. This grille features three horizontal chrome slats that run parallel to each other. The renderings also show a twin projector setup in the headlight unit and the foglights are vertically positioned on the bumper. The bumper carries the SUV look and comes with integrated skid plates. The A and B-pillars of the Creta have been given a ‘hidden’ design and there’s also body cladding. This reveals the glasshouse area of the Hyundai Creta and gives the cabin an airy feeling. 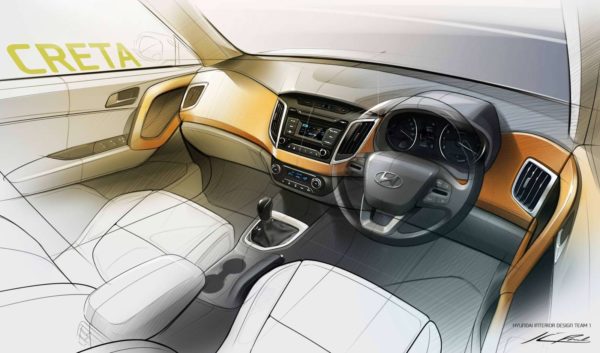 Like with most Hyundai cars, the Creta seems to offer loads of features on the inside. The renderings shows a chunky multifunction wheel with buttons to control the audio system. There’s chrome surround for the speedo and tachometer. The aircon vents get metallic accents and the dashboard gets a dual-tone layout. There’s a climate-control system and an infotainment system, but the latter doesn’t get a touch interface. The rendering also shows a couple of cupholders just behind the gear stick. The armrest between the two front seats seems it could house a storage compartment underneath. You can also see aircon vents for the rear passengers.

The Hyundai Creta will likely seen an India launch on 21 July 2015. In the meanwhile, click here for more on this Hyundai compact SUV. Keep following Motoroids for on everything auto.