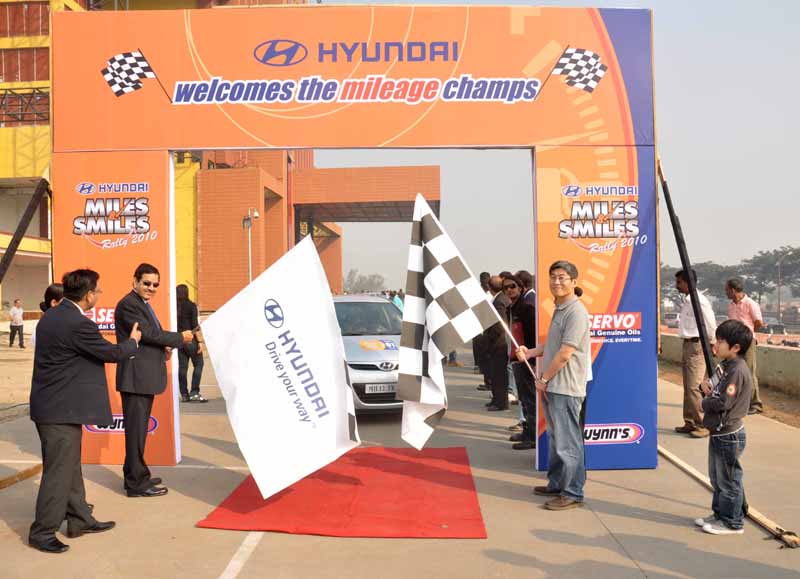 The excitement never stops at Hyundai Motor India Limited (HMIL), as was evident at the ‘Miles & Smiles Rally’ organized by HMIL for the uber cool patrons of the i20 in Pune today. Covering a distance of approximately 70 kms, the rally started from Balewadi, Pune and culminated in the picturesque town of Lonavala. J W Lee  Regional Manager, West Region, HMIL flagged off the rally from VITS Hotel Balewadi. Sponsored by the Indian Oil Corporation Limited and Wynn’s Mekuba (as associate sponsor), the TSD (Time, Speed, Distance) family rally garnered a phenomenal response with as many as eighty Hyundai i20 cars (both 1.2 ltr Petrol & 1.4 ltr Diesel variants) participating with gusto.

The ‘Miles and Smiles’ rally is a special initiative of HMIL to help its customers to acquaint themselves better with their cars, learn the techniques of fuel efficient driving, calculate the mileage per litre and also win exciting prizes in the process. The rally also aims at promoting fuel efficient driving habits among customers in order to raise awareness about the judicious use of the scarce fossil fuels. The rally began with a brief presentation on the techniques of fuel efficient driving and the participants tanked up at an IOC filling station, after which the tanks were sealed so that no one could refuel during the rally. The odometer readings were noted by the organizers and the trip meter was made ‘zero’.

The drive was flagged off from Hotel Vits, Balewadi, Pune at 9 am and finished at the Treasure Island, Lonavala at 1 pm and the participants drove along a pre decided route totaling around 70 kms. At the end of the rally the cars were re-filled and the amount of fuel consumed was measured again and the participant who had used the minimum fuel was declared the winner. Prizes included a cash award of Rs 10,000 for the winner, and Rs 6,000 and Rs 4,000 for the first and second runners up respectively in each category of cars.