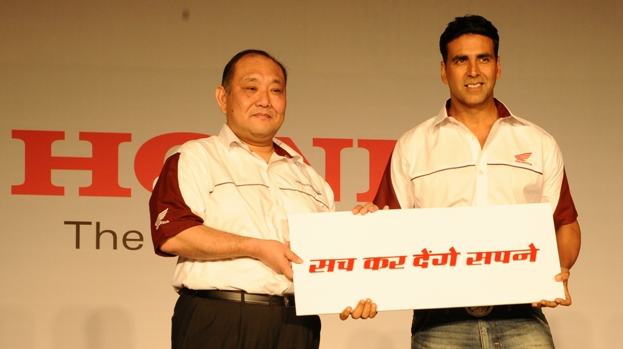 At the launch of its first mass market motorcycle, Dream Yuga, Honda Motorcycles and Scooters India made two other important announcements as well. The first of these was to bring famous Bollywood actor, ‘Khiladi’ Akshay Kumar on board as the brand’s brand ambassador for India.

Akshay Kumar has been roped in by Honda as a part of its strategy to connect with the masses. The company believes that Akshay has both emotionally touched and rationally inspired a generation of young Indians to become Achievers in a unique sense. The think tank at Honda believes that Akshay captures the essence of Brand Honda.

The company, in its official statement said “With over 100 films to his credit and a repertoire from action films to family shows, Akshay has amassed mass following across the length & breadth of India. Honda’s association with Akshay Kumar will be symbiotic as both are driven by ‘The Power of Dreams’.”

Associating with Honda, Mr. Akshay Kumar said, “Honda as the World’s No. 1 motorcycle maker carries with it a legacy of customer oriented products from 50cc to 1800cc and goodwill of over 200 million customers worldwide. I am deeply impressed by Honda’s vision and proud to associate with this young and vibrant Brand that is innovative, technologically advanced and committed to society.”

The second announcement was about Honda’s vision to Communicate through its rational Indian brand slogan ‘Sach Kar Denge Sapne’. The new brand position, according to the company will connect emotionally with customers of all demographics and psychographic.

The spirit of Honda’s global brand slogan “The Power of Dreams” will be brought alive by its India specific Brand Identity “Sach Kardenge Sapne”. The slogan recognizes India as the center of global two-wheeler business for the coming times, expresses Honda’s vision and our intentions towards the future: ‘To share our dreams with others and make them a reality’.

Honda has really taken a big leap into the all-important commuter motorcycle segment in the Indian two-wheeler market. We have seen the engineering and marketing prowess of brand Honda in India for more than 30 years now, and are quite sure that today’s happenings must have sent chilly shivers down the spines of the lines of TVS, Bajaj and most important Hero Motocorp.

What do you think? Will Honda’s sales volumes grow drastically in India this point on? Or will the whole hoopla surrounding the Dream Yuga fizzle away with time? Do you think Honda has what it takes to displace Hero Motocorp from the No.1 position? How much time will it take for them, according to you, if that’s possible? Do let us know. We’d love to hear from you.