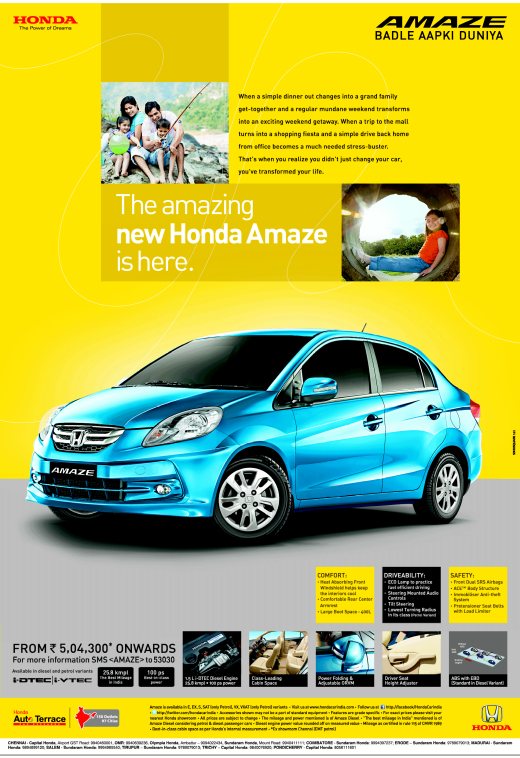 We reported in detail when Honda Cars India launched the Amaze sedan in India. The Amaze is the car maker’s smallest sedan ever and is also the first diesel car in India to wear the Honda badge. The diesel variant of the Amaze is not just more powerful than the competition but is also more fuel efficient and spacious. Coupled with the traditional Honda Cars strengths and the brand image that Honda vehicles enjoy in India, it is pretty much for sure that the Indian subsidiary of the Japanese auto giant has a winner in its hands.

As expected, the car has been warmly welcomed by the Indian car buying lot and it has today emerged that the car has already bagged as many as 6,000 bookings. The car was launched only a few days ago, on April 11, and such a response is nothing short of outstanding. It is being said that the new car is already commanding a waiting period of more than 2 months in some of the cities!

Soon after launching the TVC for the new Amaze, Honda has now published the print advertisement for the new car. The Hindi version of the advertisement has a tagline of “Badle Apki Duniya”, which translates to “Change your world” in English.

It is easy to predict that the Amaze has a promising future up ahead and it seems like the competition should be really worried with the way Honda Amaze has managed to take the car market by storm.