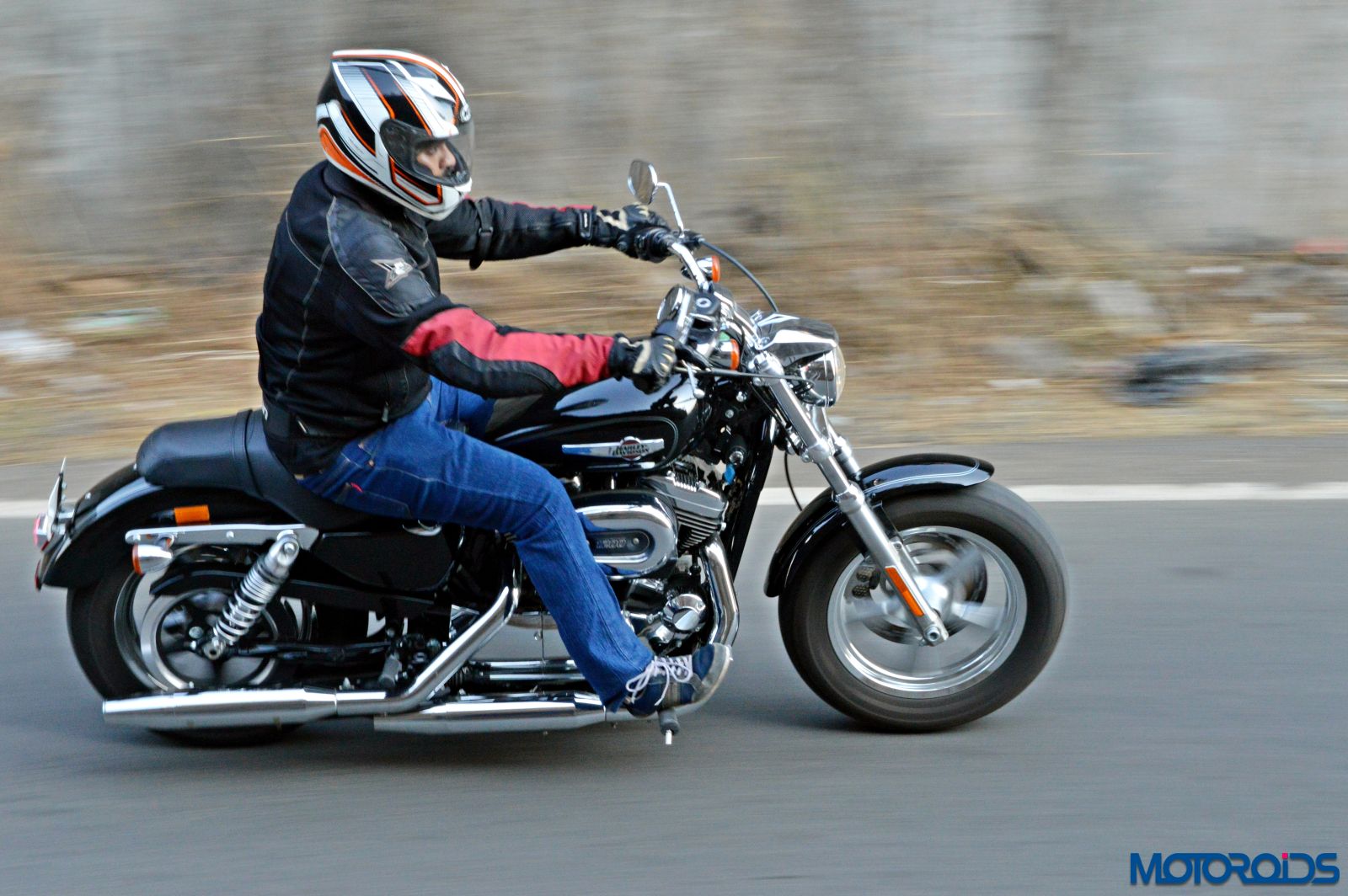 Watching that ball of hot plasm slowly approach the horizon has to be of the most soothing sights as it is. However, to have an arrow straight road meeting the red ball of fire on the horizon, while you’re astride a Harley-Davidson simply makes it one of those spiritual experiences. After getting singed in the April heat for a few hours, riding and shooting the shiny new Harley-Davidson 1200 Custom we found our moment of respite, riding straight into the orange ball of life – oh what a moment that was! So while you may have ridden some two-wheeled equivalents of ICBMs, these languid American cruisers have an unhurried charm, which can be matched by a rare few machines. That experience has been restricted to a few elite thus far, though Harley-Davidson has been trying its bit to make that hitherto high hanging fruit down within the commoners’ reach. The 1200 Custom is aimed to be one such easy to get delicacy. Is it juicy enough? We’ll soon find out.

After creating quite a few ripples in the INR sub-5 lakh motorcycle segment of the Indian market with its most affordable cruiser, the Street 750, Harley-Davidson remained quiet for most of 2015. In fact, the Milwaukee based cruiser maker even skipped the 2016 Auto Expo. But that did not necessarily mean that the honchos at the American bike maker were not burning the midnight oil. So while the Street 750 was clocking some terrific sales number, the blokes in black suits were planning out a new product strategy. The exercise saw Harley-Davidson snap off the Superlow from its Indian portfolio while the new 1200 Custom was introduced to fill the gap between the Iron 883 and the Forty-Eight. The 1200 Custom blends compact dimensions and a rider friendly, nimble character with typically muscular Harley traits such as those chunky tyres and that massive chrome laden V-twin centrepiece. It turned out quite an interesting machine to swing a leg around. 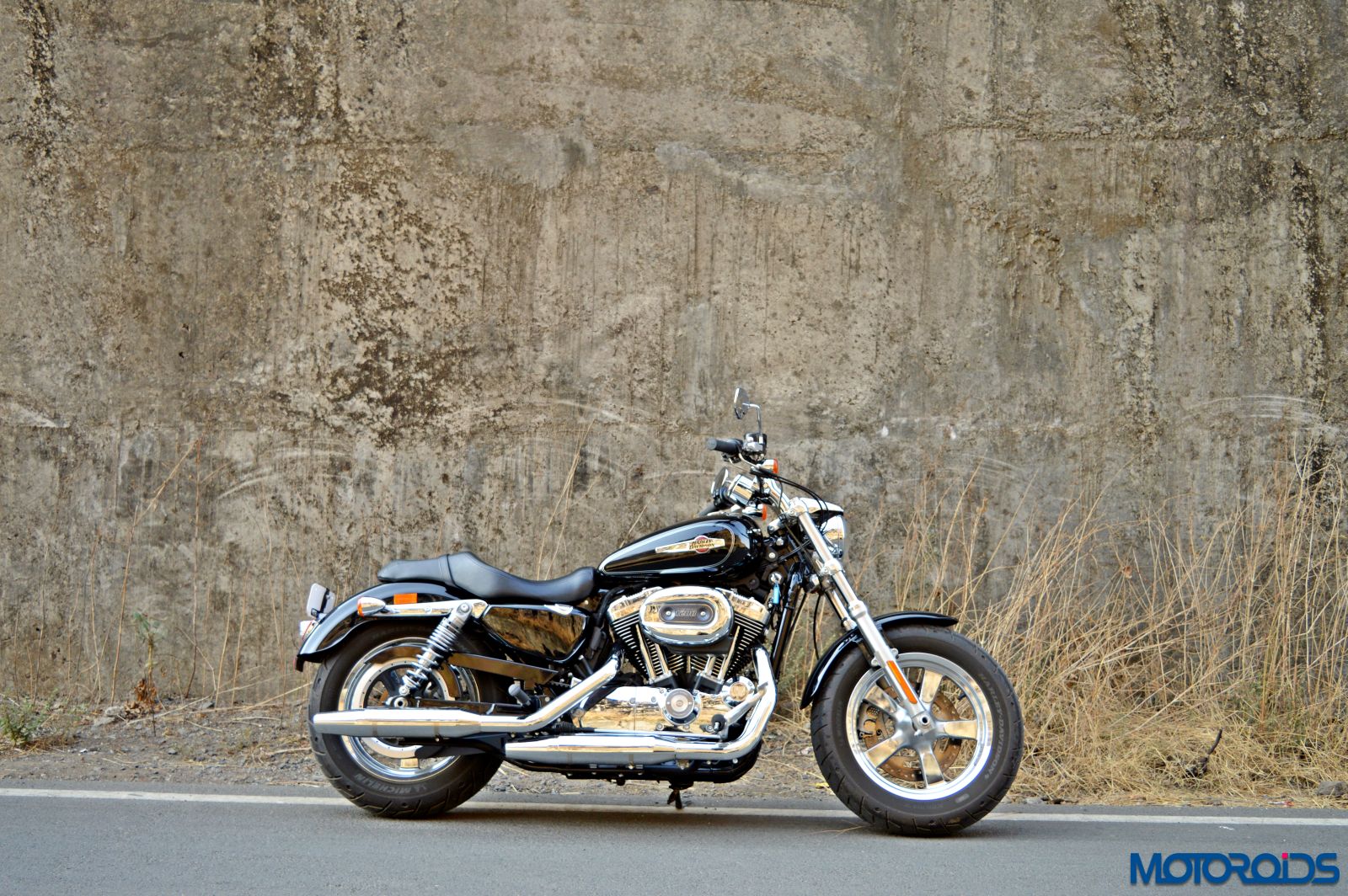 The 1200 Customer looks rather compact, until you get blinded by the acreage covered by its top quality chrome, and the unusual proportions of its engine and tyres. That said, it blends in with the lesser motorcycles relatively well going by the conspicuous record of H-D motorcycles. The rather loud exhaust channeling out the rage of that V-Twin further helps this everyday H-D cruiser stamp its authority over the metal representing the lower echelons of the food chain. So while the 1200 Custom wouldn’t exactly save itself from narcissistic extroverts trying to pose against it, the number of people whose attention it draws would be relatively less as compared to a full blown Harley. Asking for attention through that compact frame are typical Harley-Davidson traits such as those beefy 16-inch Michelin Scorcher tyres at both ends, wrapped around five-spoke steel laced wheels; and tons of chrome. 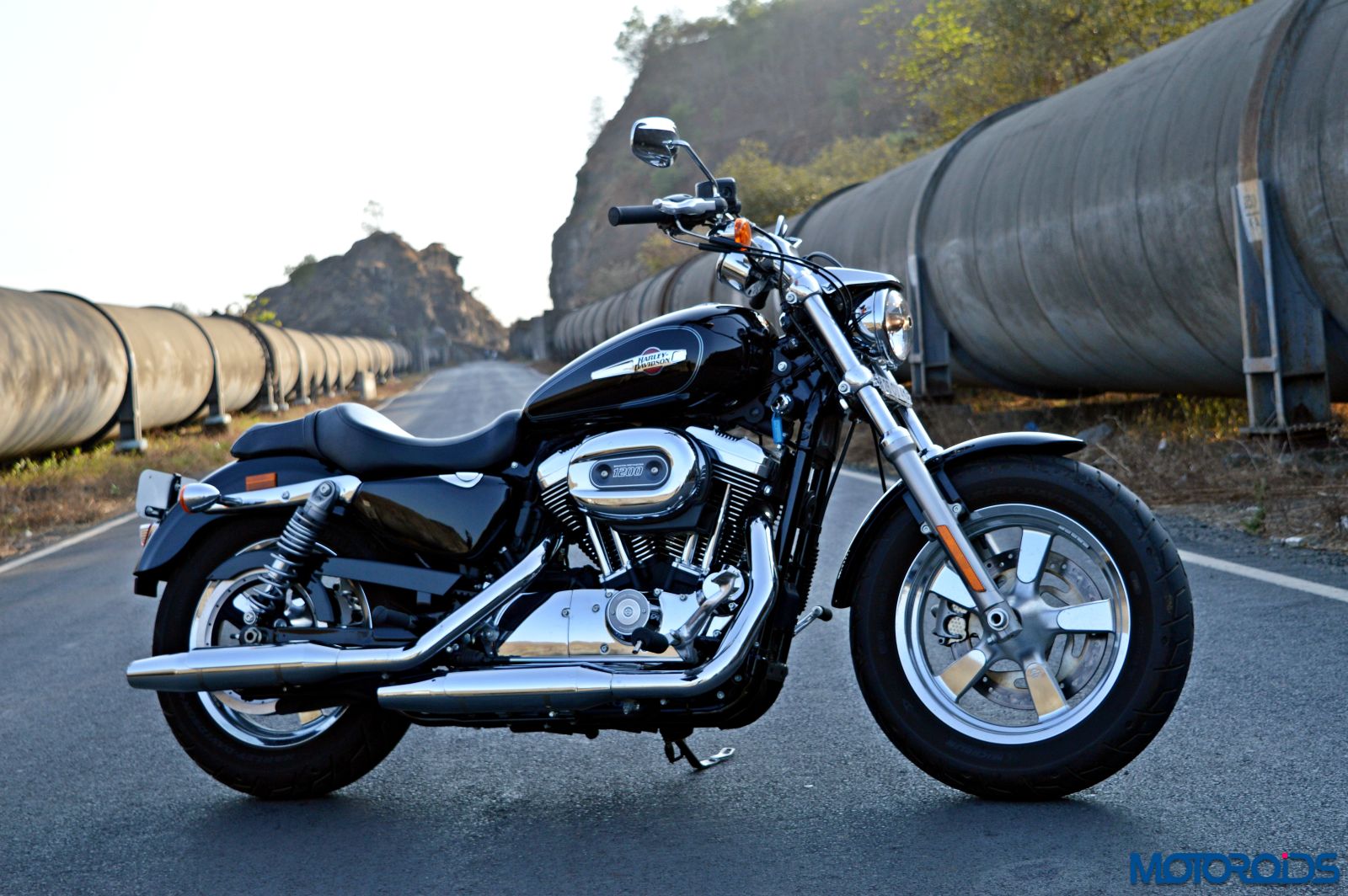 The list of surfaces that have been drenched in chrome is rather long and includes the five spoke cast aluminium wheels, front suspension, headlight nacelle, LED tail-light, handlebar, speedometer, fuel filler cap, oil cap, engine, exhaust pipes, turn indicators and mirrors – and we’re sure we’ve missed quite a few bits there. The 1202 cc air-cooled V-twin power plant, cocooned inside the Sportster frame, shines its armour in all its glory with various chrome highlights. The fuel tank might appear compact, but has a 17-litre capacity, and is one of the USPs for the 1200 Custom. The fuel tank on the Sportster, strapped with a 3-D Harley-Davidson logo on either side and a non-lockable fuel filler cap, requires lesser fuel stops as compared to the Forty-Eight’s minuscule 8-litre unit.

What’s slightly bothersome is the pillion seat, which becomes almost non-existent when the Sportster is ridden by an overfed rider. Then again, the propensity of Harley-Davidson to sell such essential stuff as accessories isn’t something new, and those willing to take a pretty pillion along will have to shell out a few grand extra. 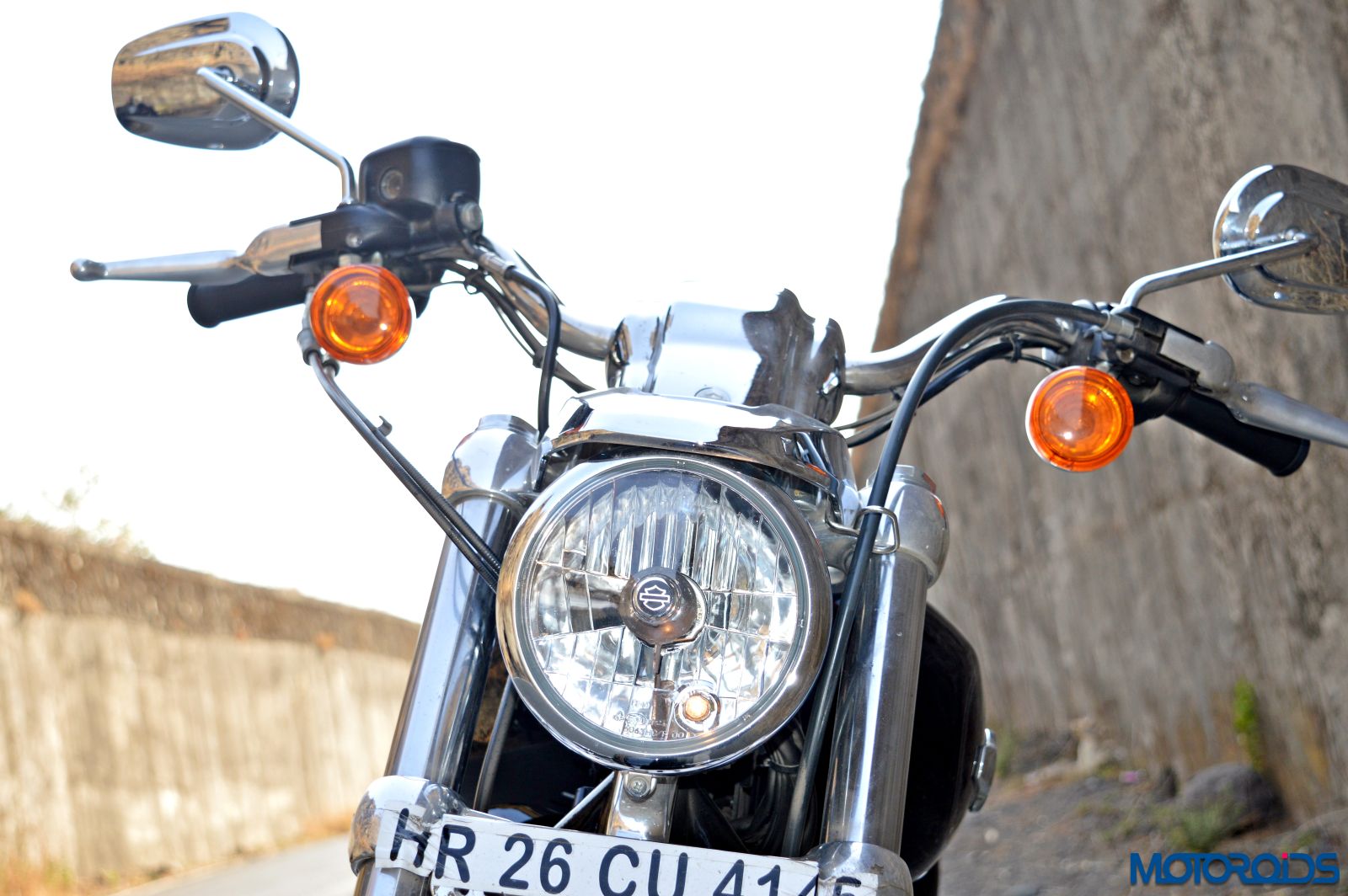 Lastly, cruiser motorcycles, for me, are all about the sheer size and the 1200 Custom doesn’t quite represent the breed emphatically enough. That being said, the motorcycle will handle the cityscape quite ably where the compact size would really come handy. Besides, you wouldn’t want to ride back from work with that annoyingly talkative colleague, would you?

The overall build quality is quite good, and it jolly well be that when the Sportster carries a price tag starting at Rs 9.10 lakh. The compact, floating instrument cluster displays most of the required information. The switchgear is easy to access and trouble-free to use but it does take some time to get accustomed to if you haven’t ridden a Harley-Davidson before. Oh, and we absolutely loathe that key, which is befitting for a 100cc moped, but not for a motorcycle representing one of the most legendary cruiser brands ever.

Check out the Harley-Davidson 1200 Custom in detail through images below: 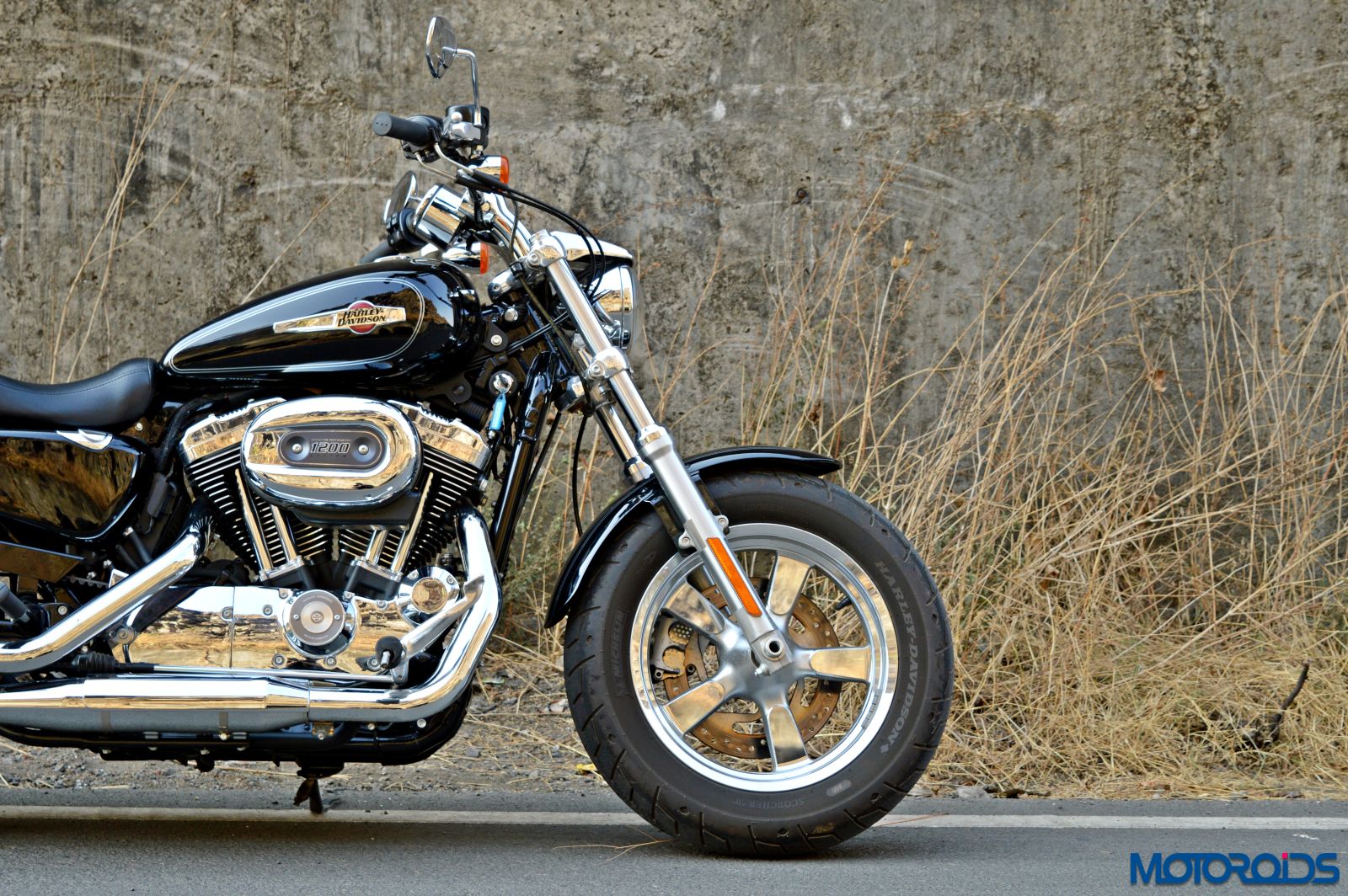 The Harley-Davidson 1200 Custom is differentiated enough from your everyday crop of motorcycles, though it doesn’t shout ‘I’m a Harley’ from the rooftop 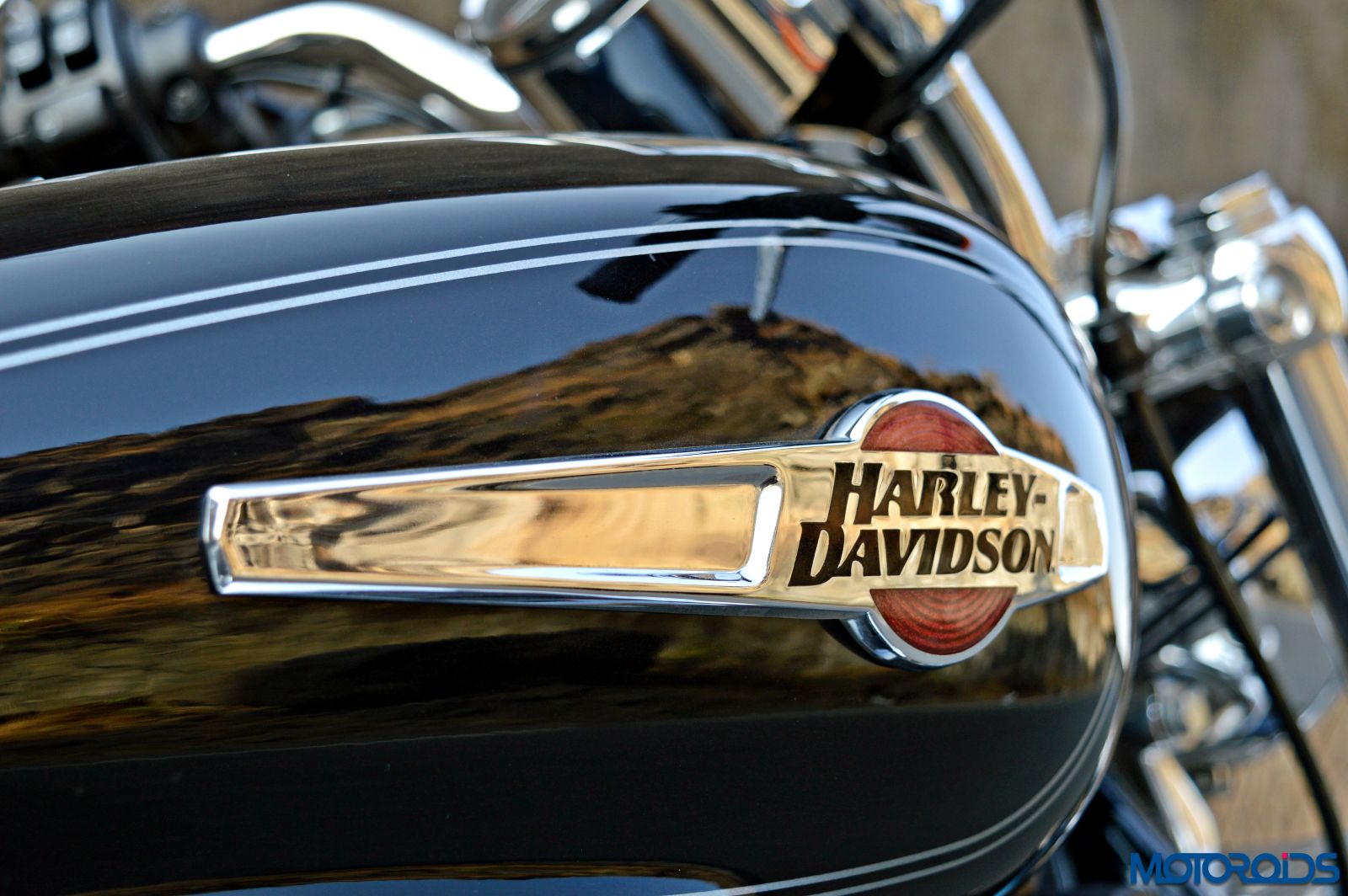 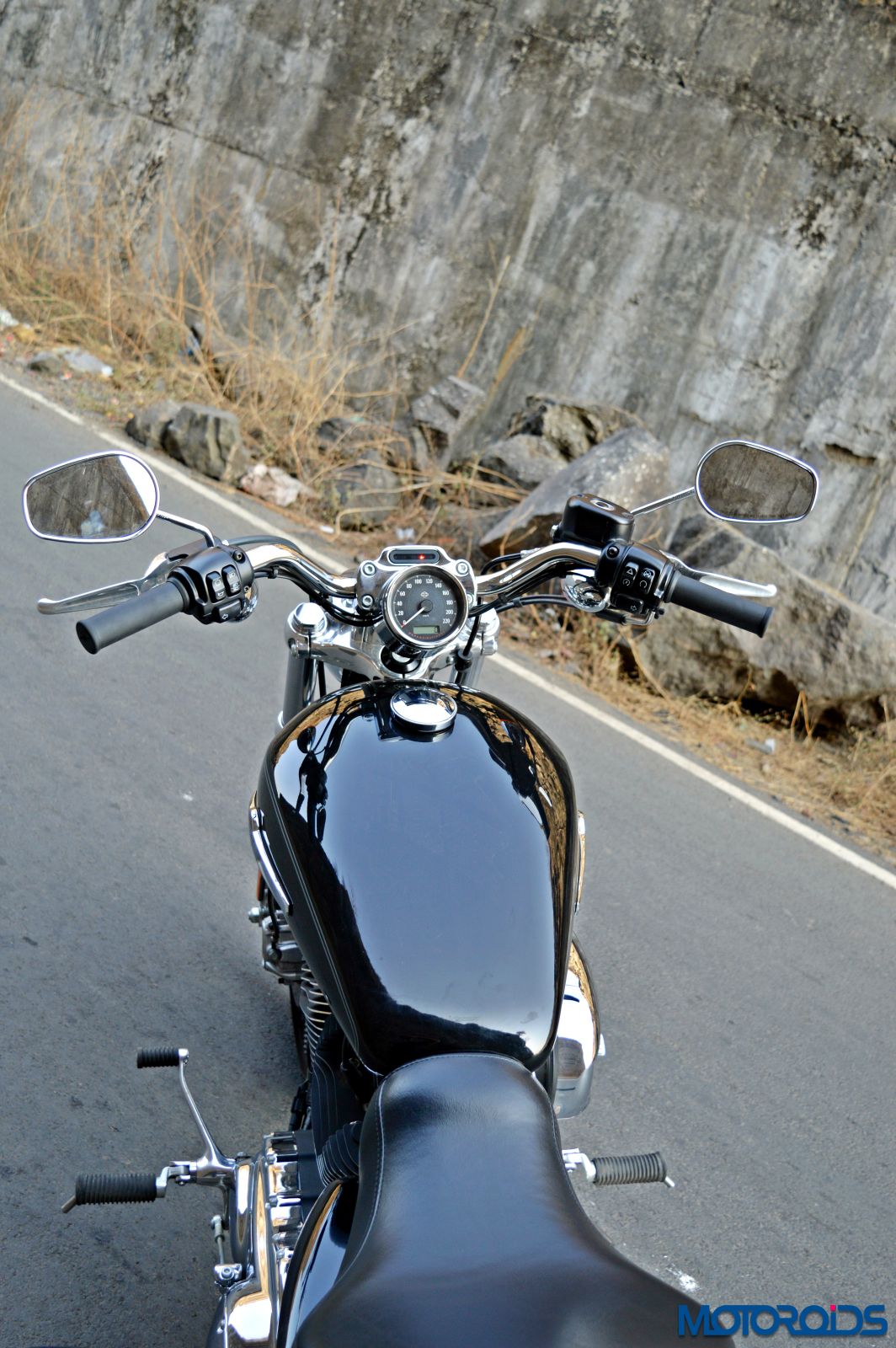 That fuel filler cap, however, does not get a locking mechanism 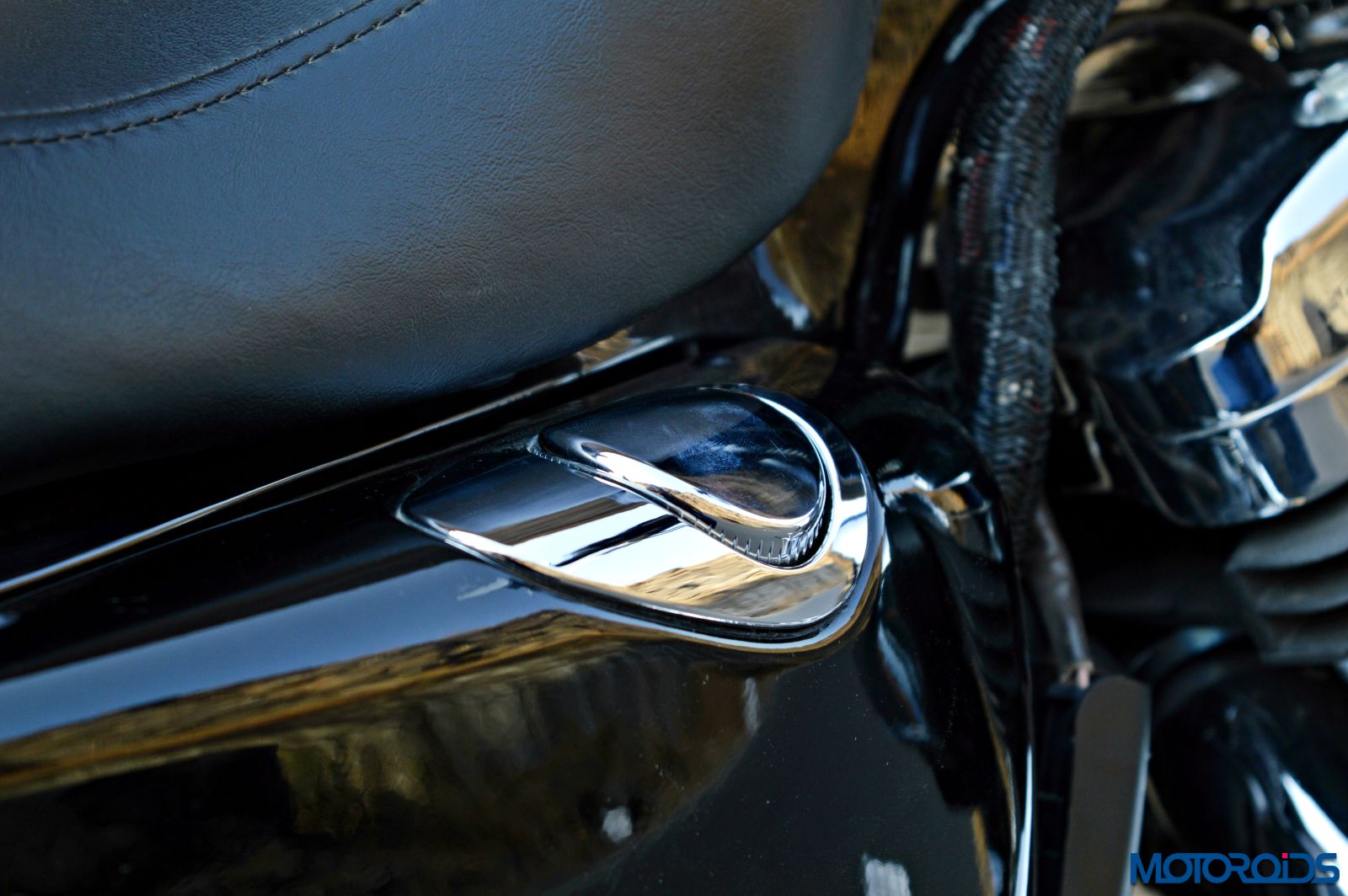 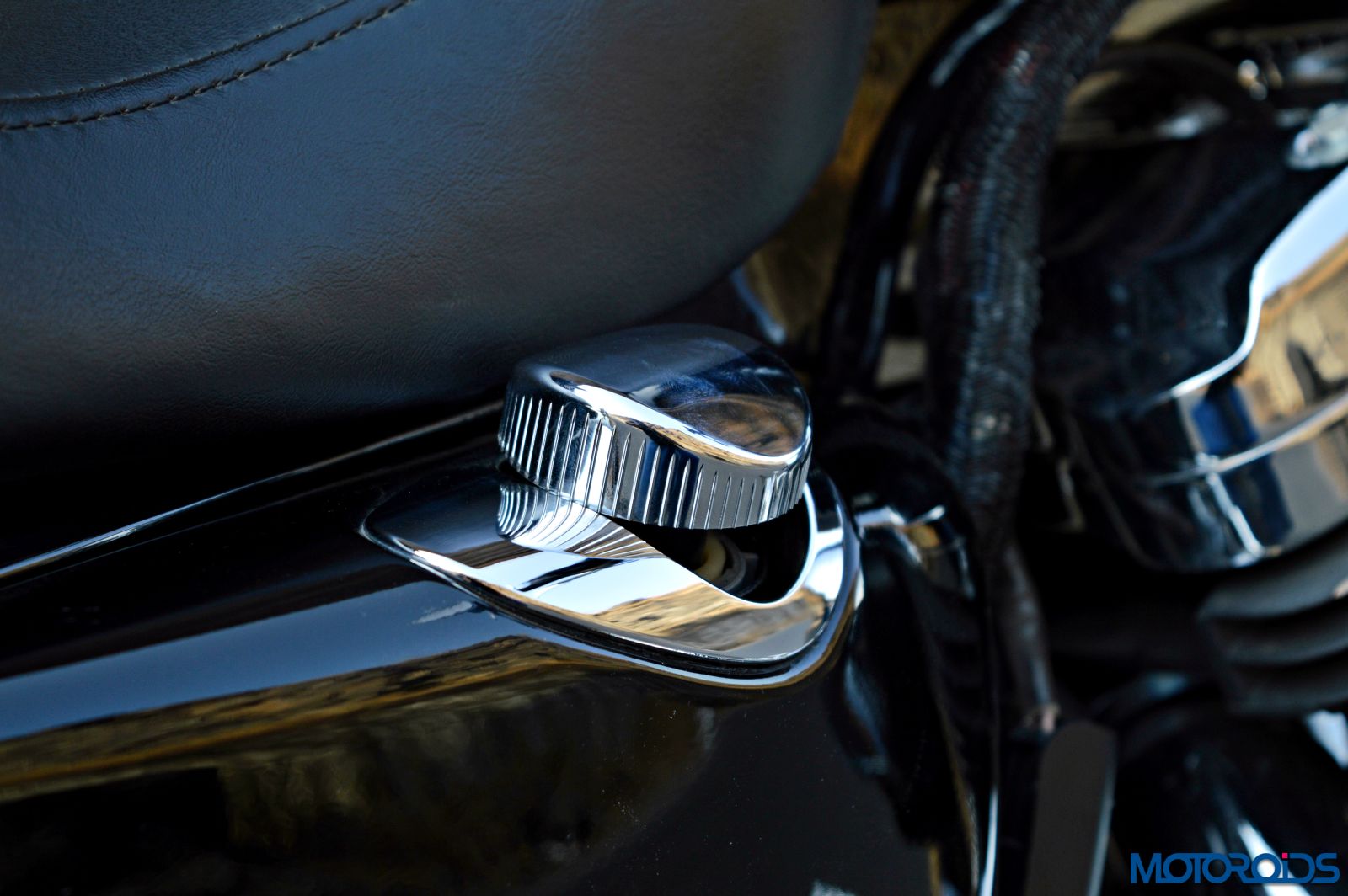 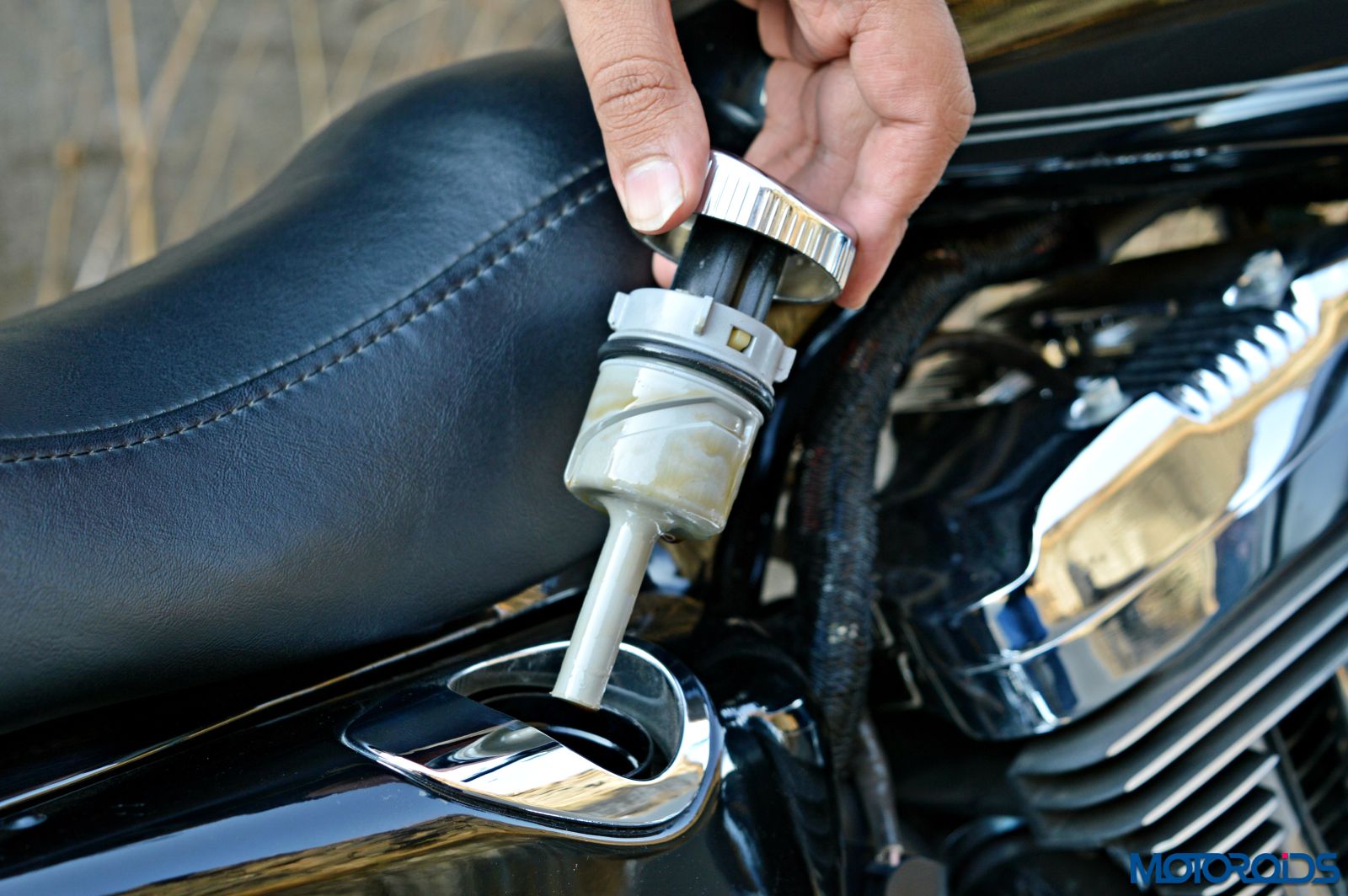 The oil filler, similar to the Forty-Eight and the Iron 883, is placed on the side panel. Push the chrome finished cap to bring it up and then turn it anti-clockwise to open 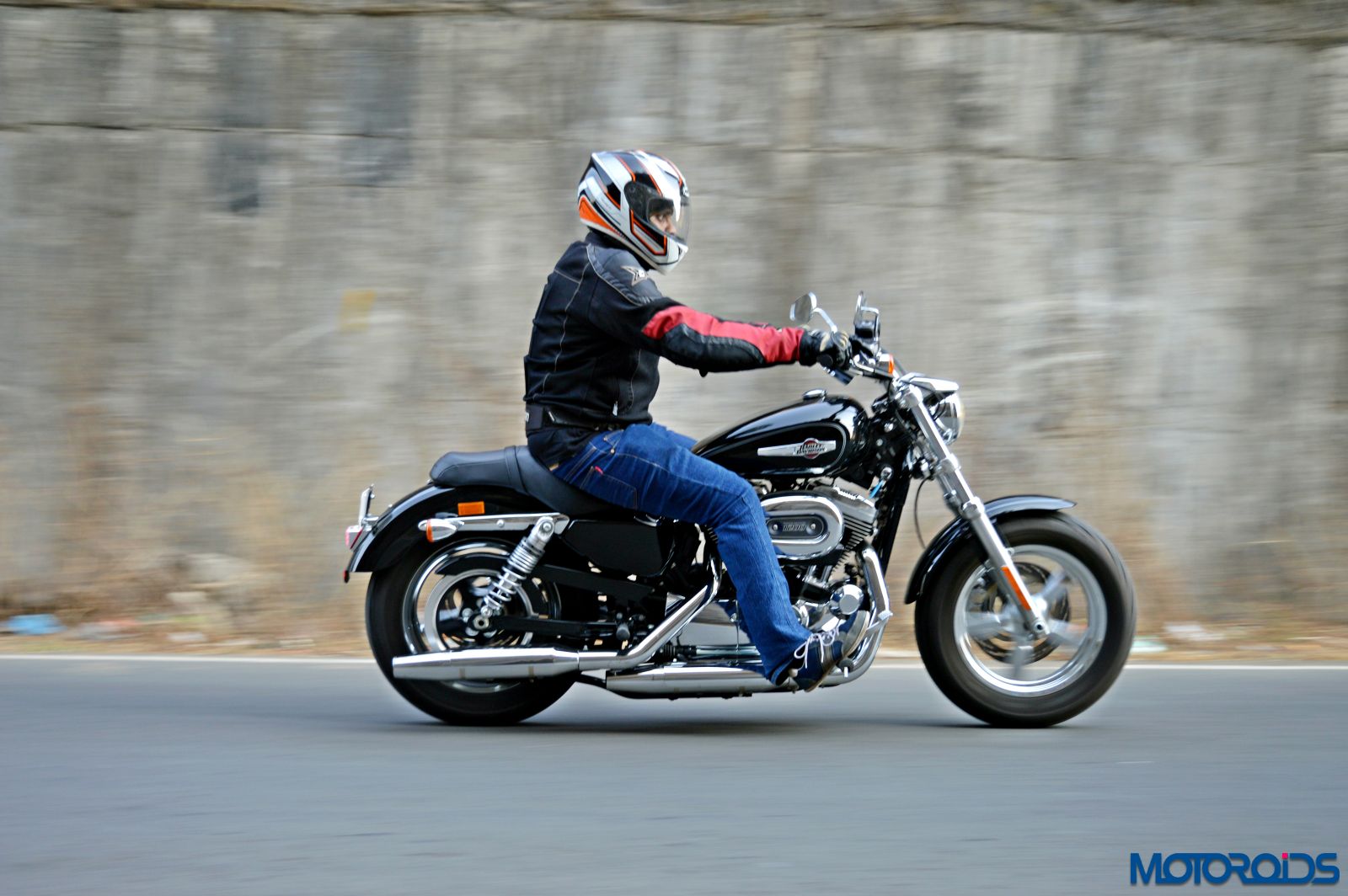 Riding position is quite similar to its sportster siblings, and so is that nearly non-existent pillion seat. 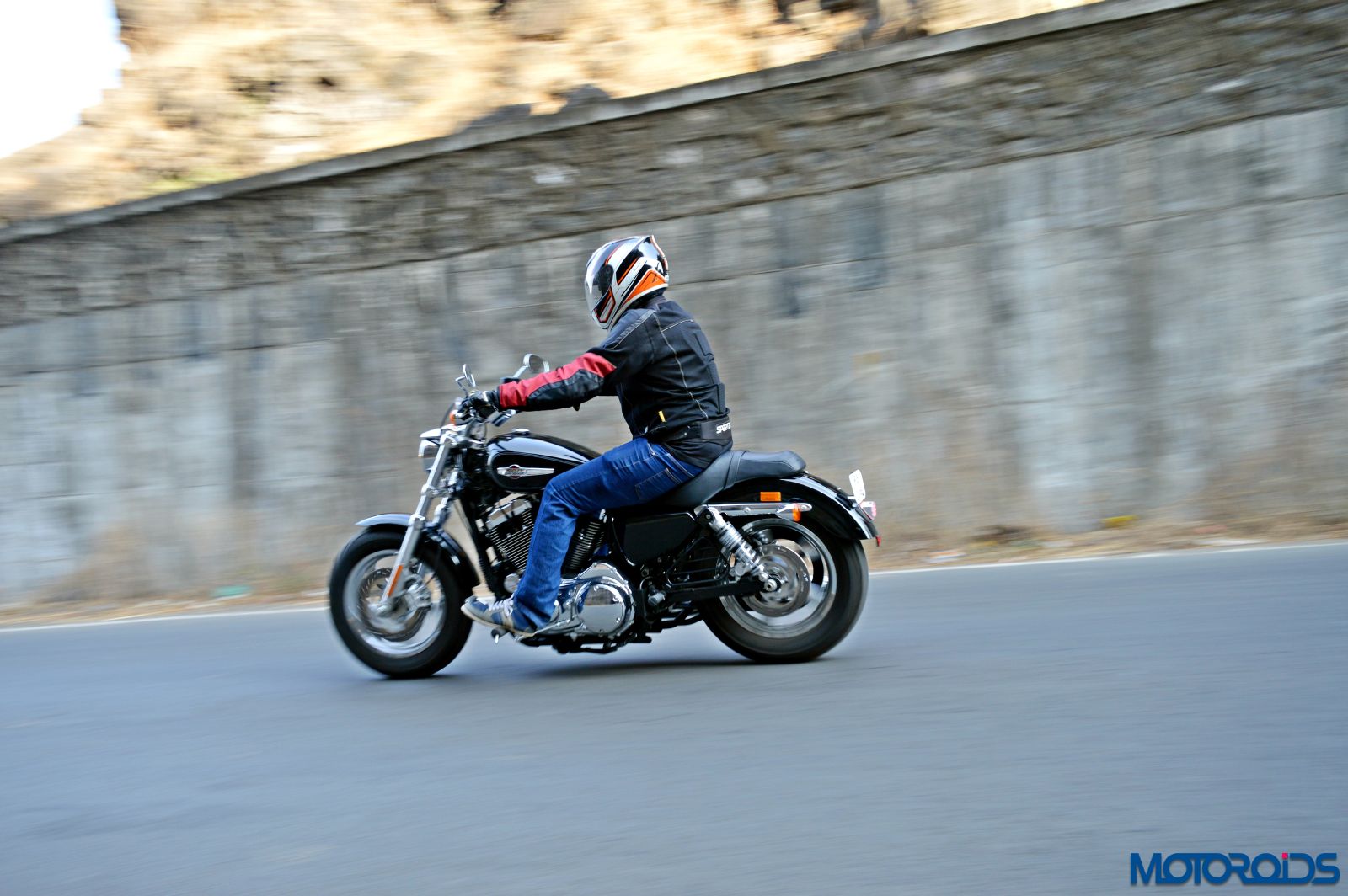 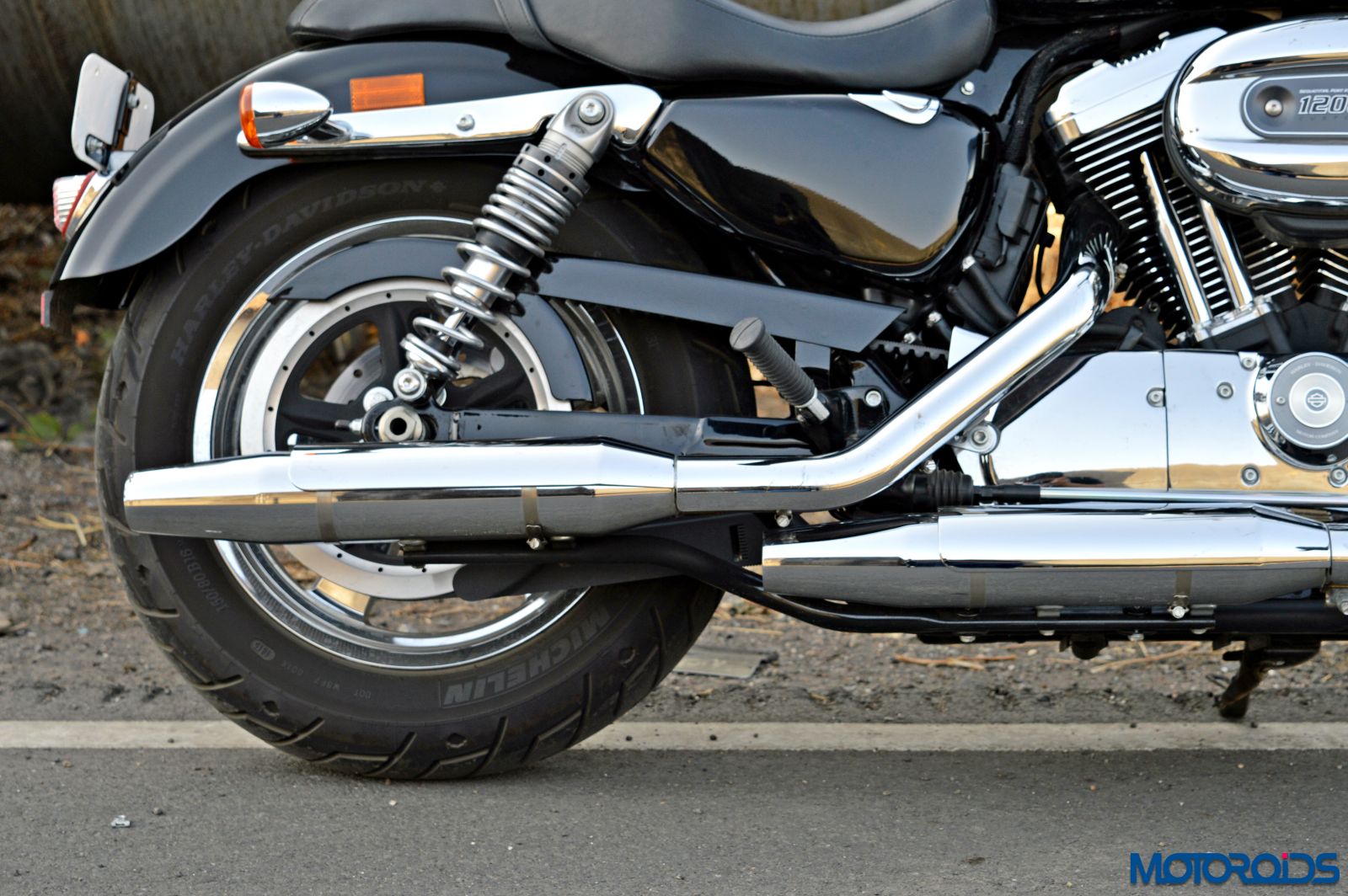 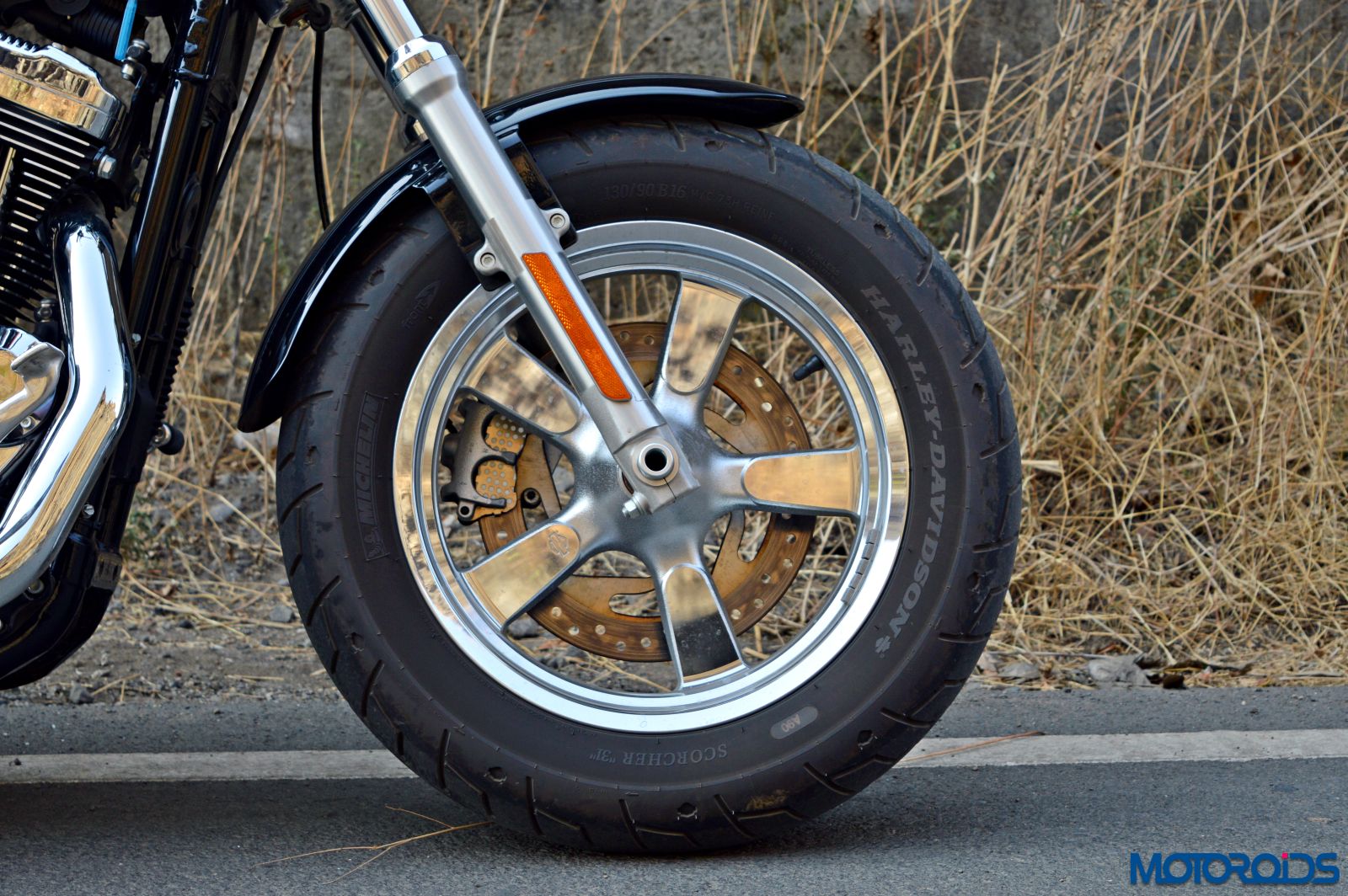 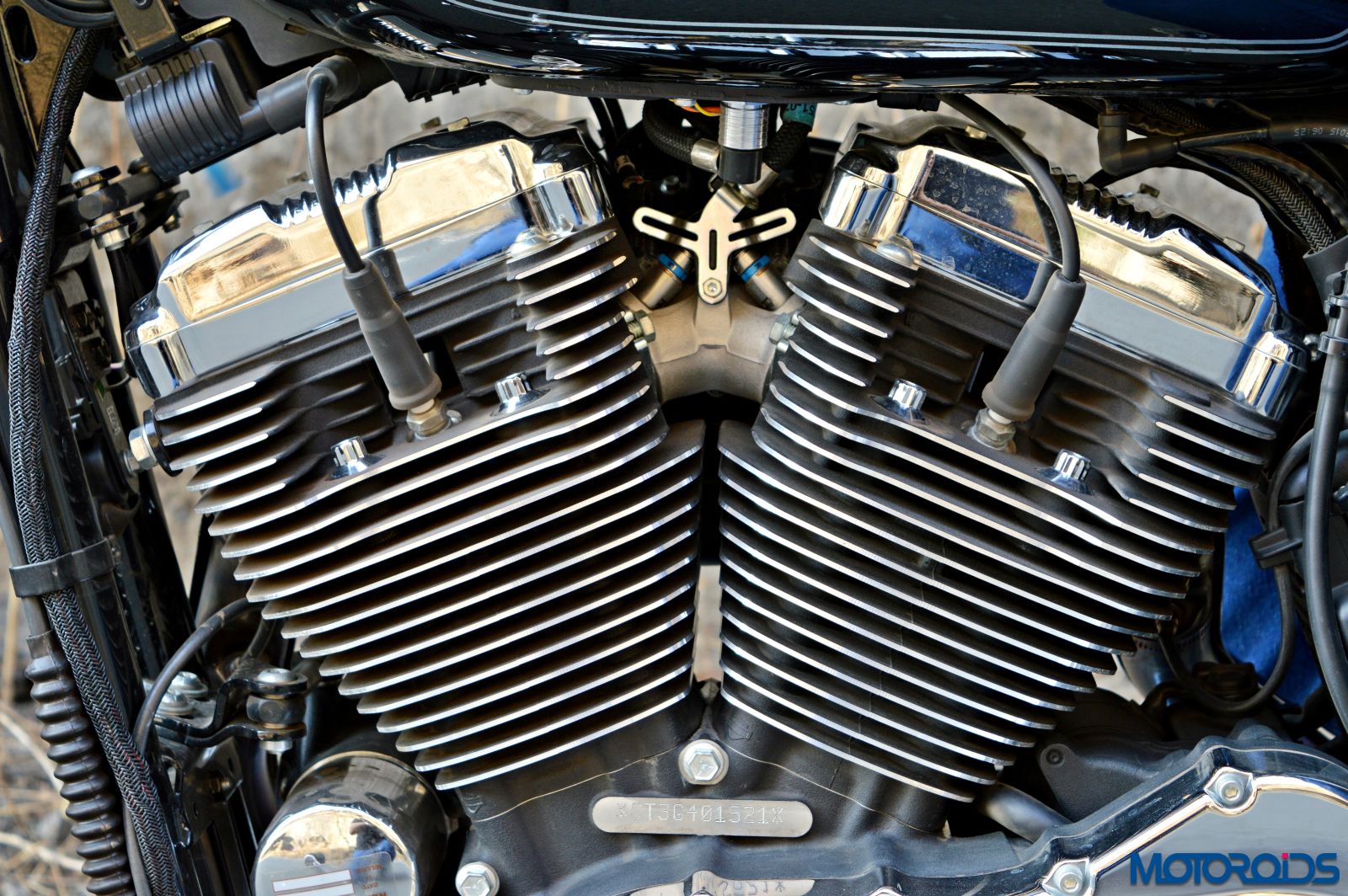 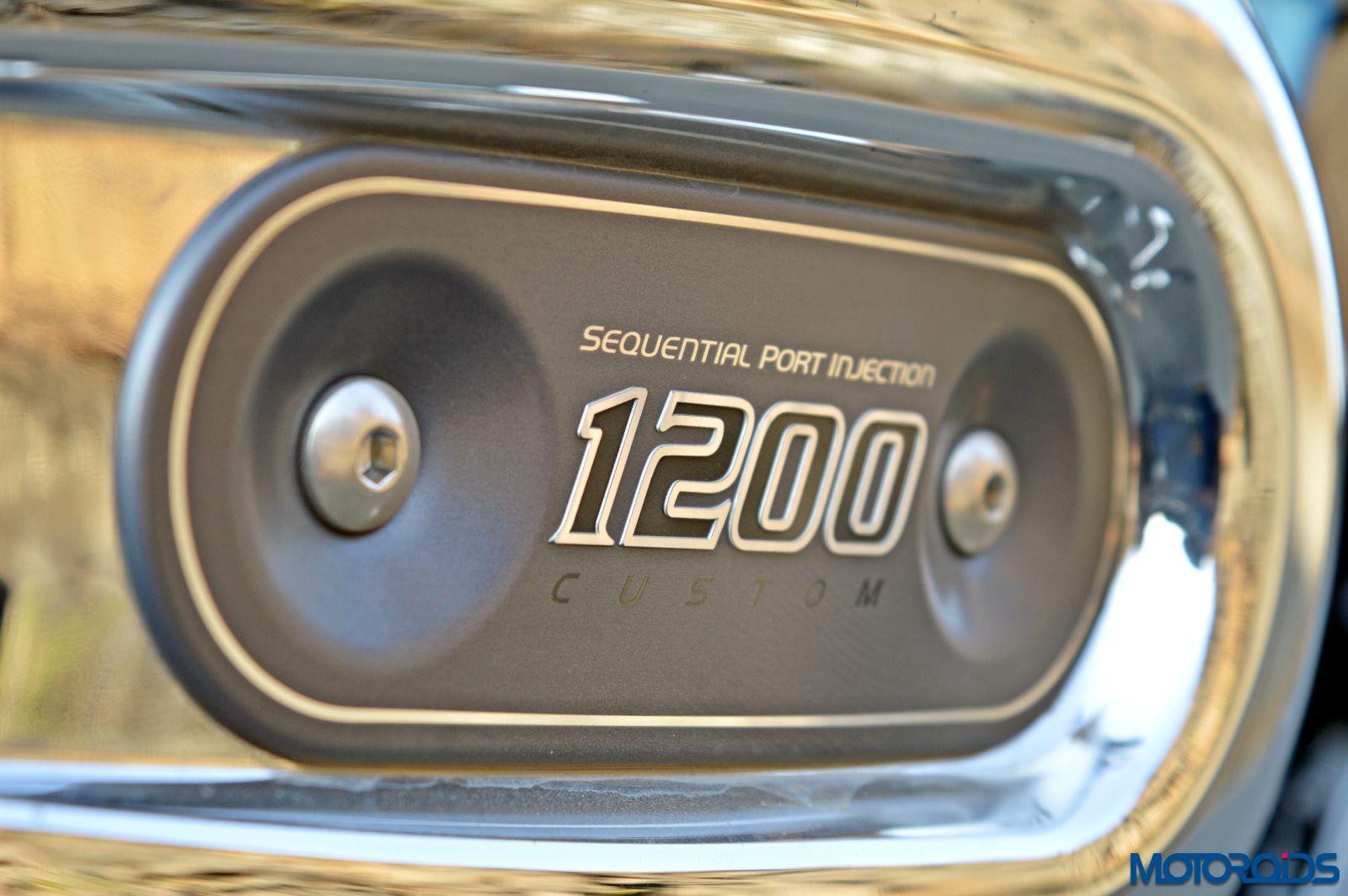 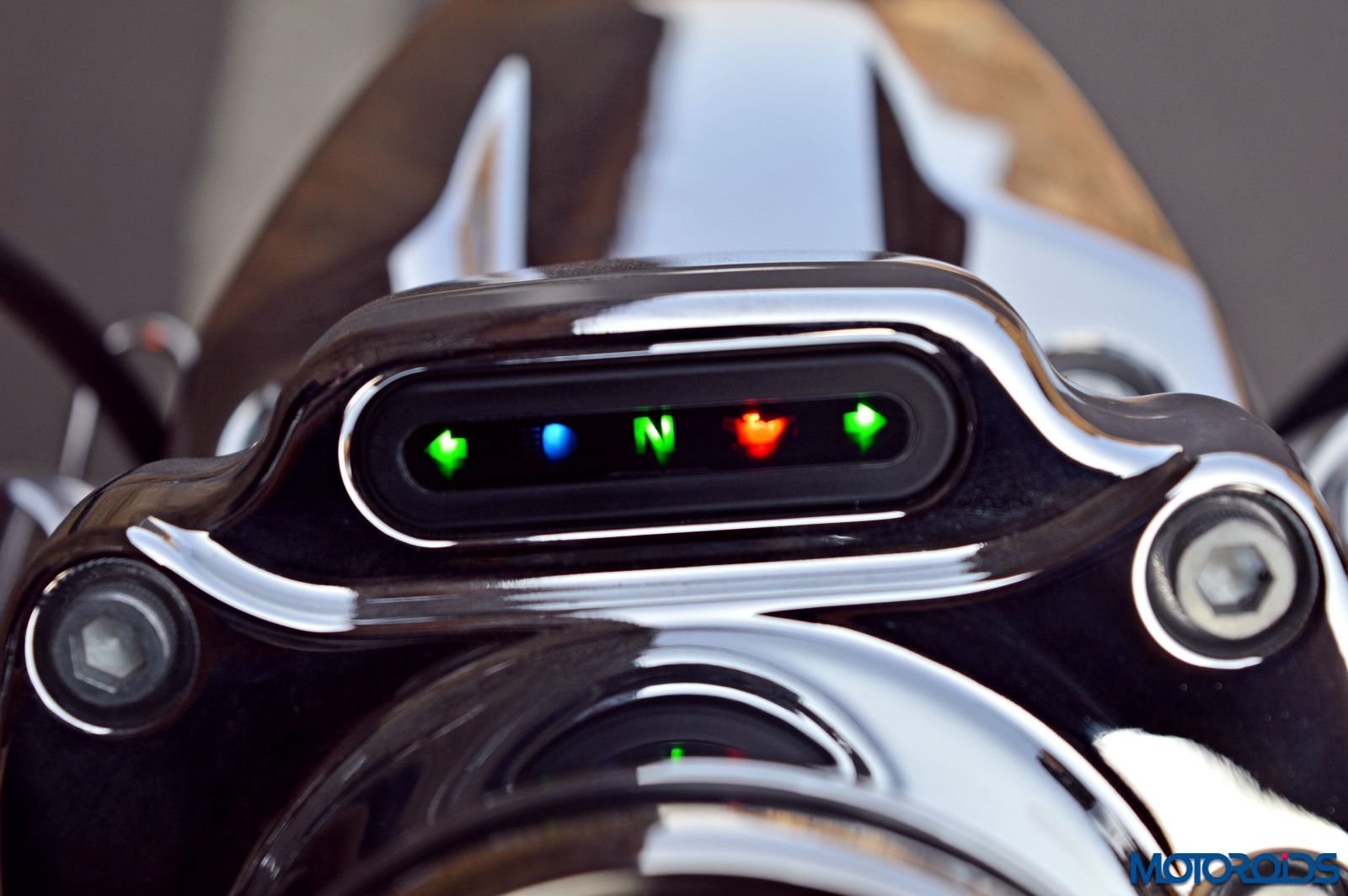 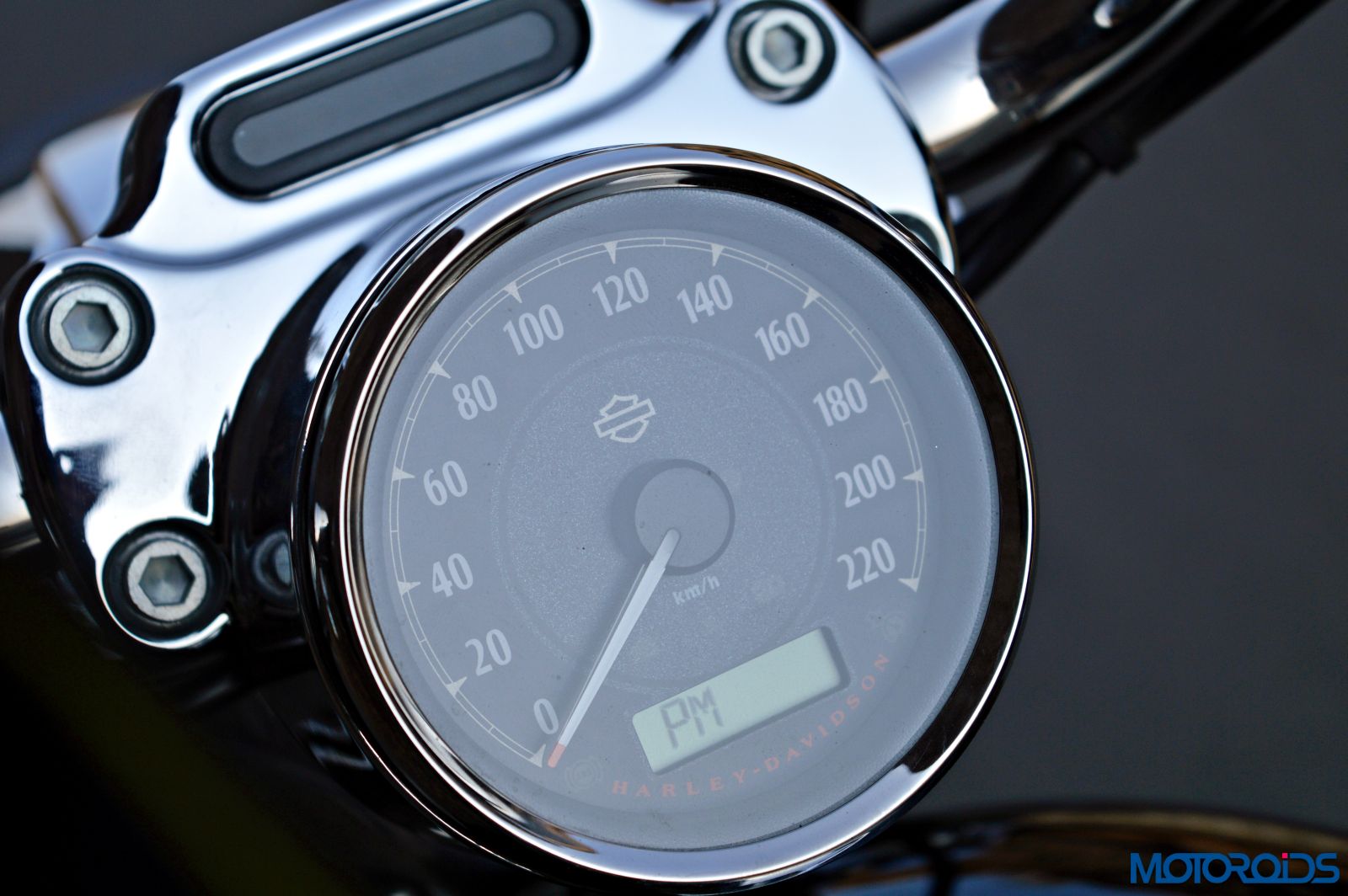 The compact instrument cluster is near identical to the Forty-Eight but the tell tale indicators are placed on the top of the speedometer. Digital screen shows time, gear engaged, revs, tripmeter, odometer, though it misses out on information such as distance to dry 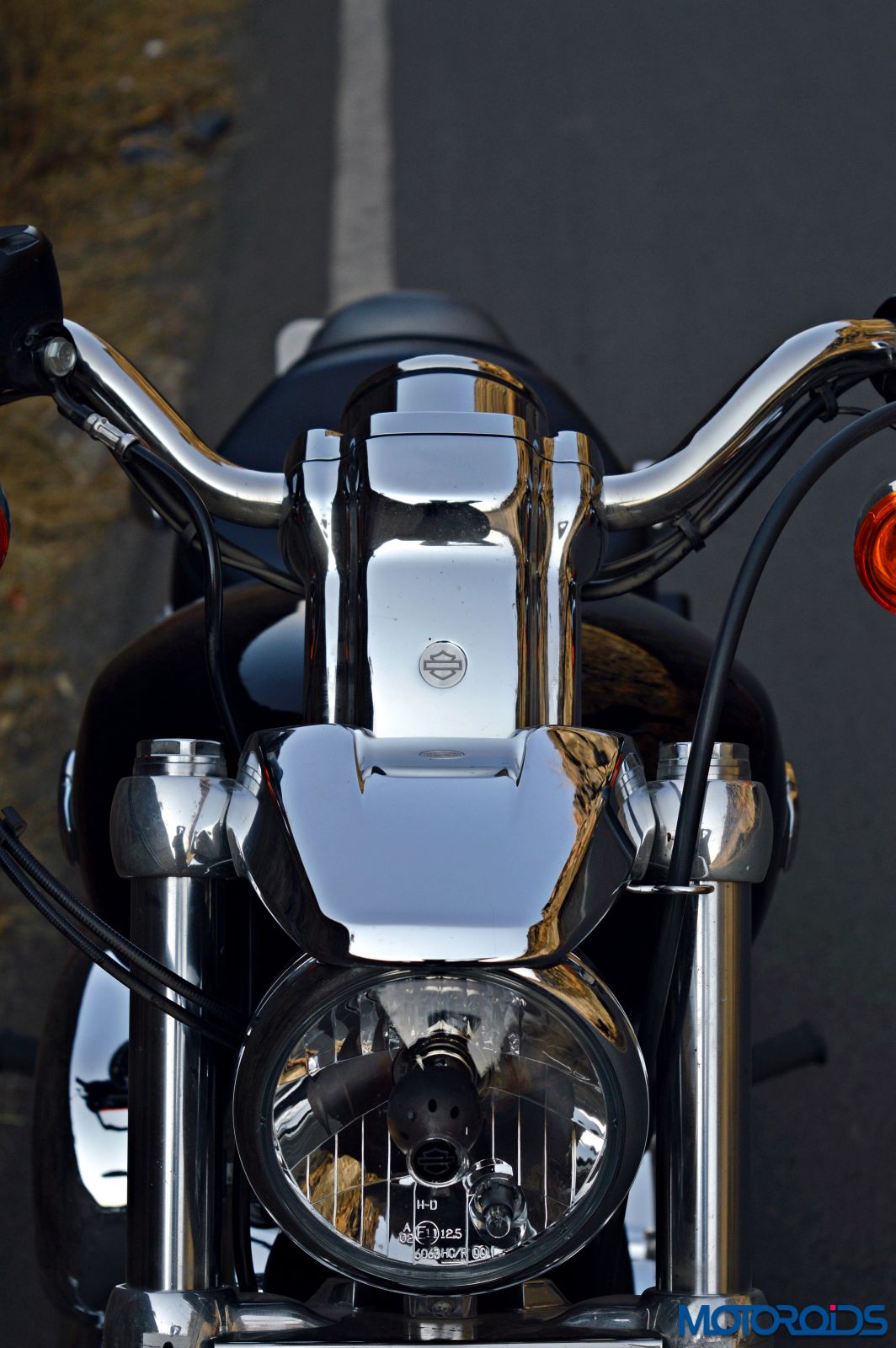 That chrome piece above the headlight got a mixed response from the folks in the Mumbai office. Some liked it, some thought the motorcycle could have done without it. 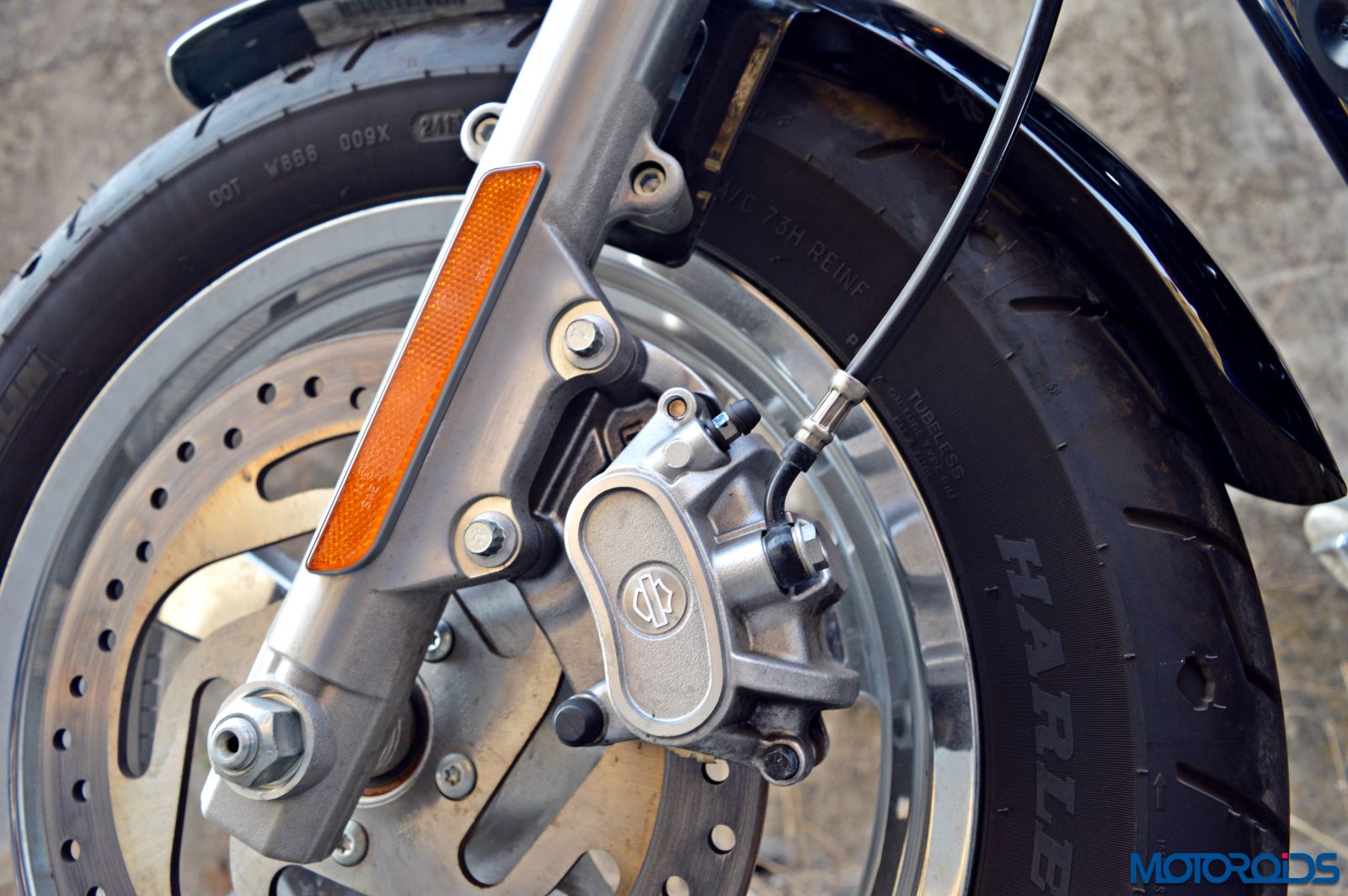 The brakes are quite potent but the 1200 Custom does not get ABS, even as an option, which may not go down too well among potential buyers 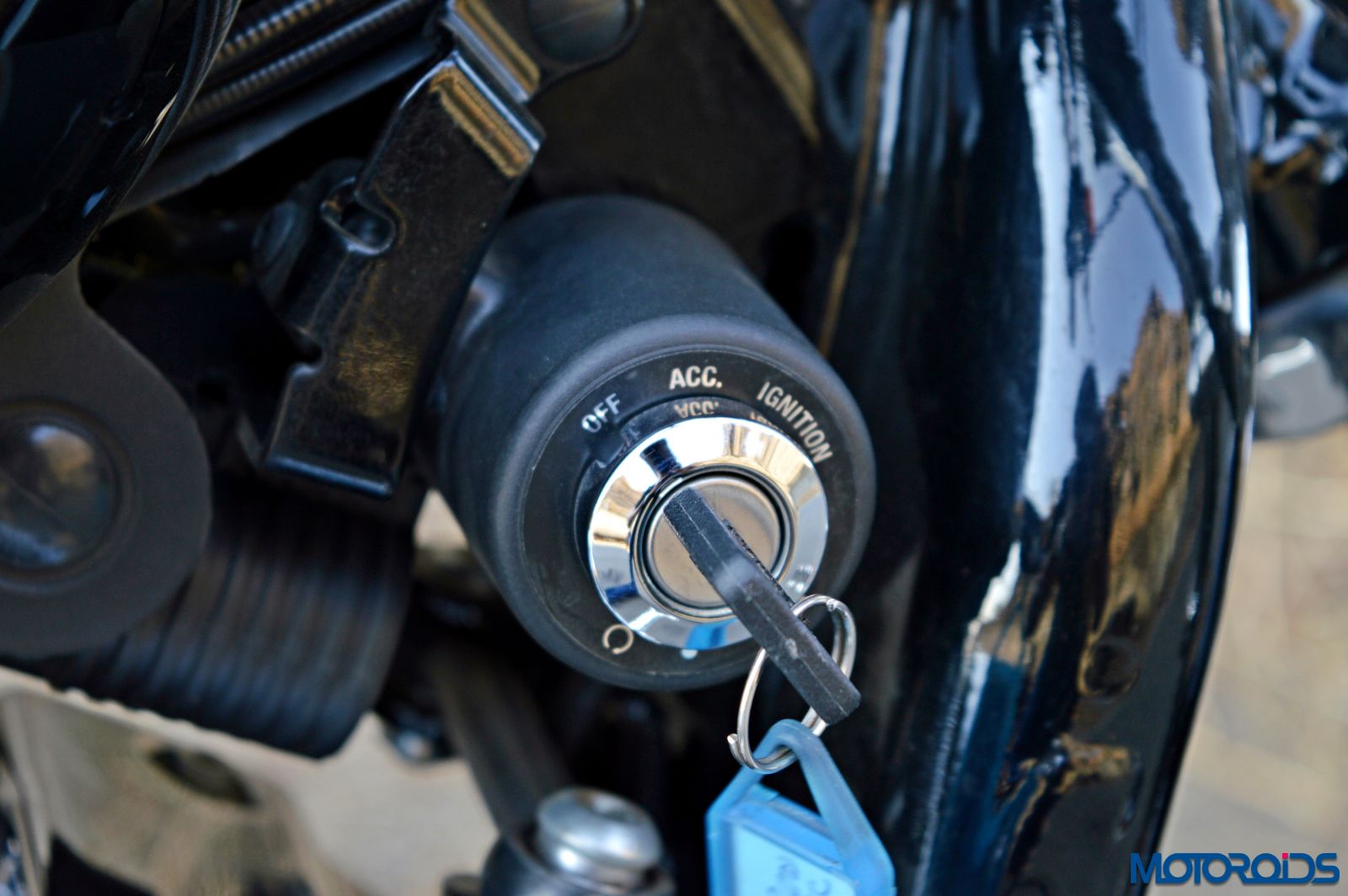 Finally, that diminutive plastic key doesn’t quite match the grandeur of an H-D

So what is that chrome adorned powerplant capable of? The 1202cc air-cooled, V-Twin Evolution engine with Electronic Sequential Port Fuel Injection delivers a healthy 96 Nm of torque, available at as low as 3500 rpm. Push that start button and you are welcome by that throaty exhaust note and a massive wakeup call from the engine, shaking up pretty much everything bolted around it, even while idling. 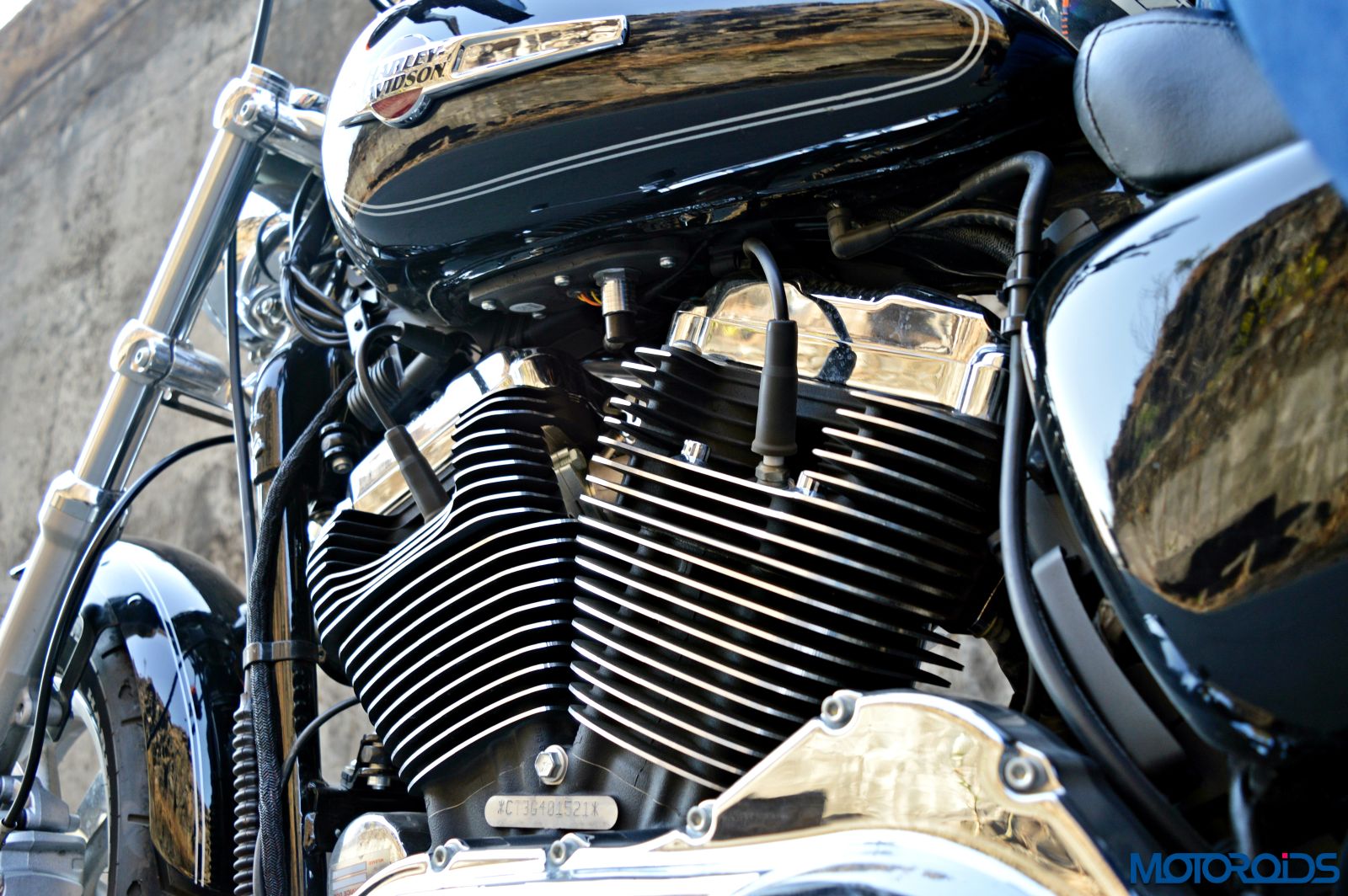 On the move, the engine wants to stay beyond the 2500-3000 rpm mark, below which the twin-cylinder power plant feels clanky and calls for downshifts. Post 3500 revs the motorcycle feels much torquier and smoother, and the 268 kilograms of its wet-weight feels almost non-existent. The rated top speed is in excess of 170 km/h and the way that engine revs, especially for a Harley, it wouldn’t take much before you get there. The limiter cuts in at 6000 rpm, and that engine speed is achieved rather quickly. Even as the 1200 Custom climbs up to high speeds, the engine does not feel stressed or beg you to relent. This Sportster is happy with its throttle getting wrung and that’s what made it so popular among some of my colleagues who don’t generally like cruisers. The 1200 Custom , like all Harleys can also chug along at languid speeds of 100-120 km/h all day long at 3500-4000 rpm.

The throttle response is crisp for a motorcycle of this class, and getting quick bursts of speeds for fast overtaking manoeuvres is never a problem. The five-speed transmission did not disappoint either, slotting in the called-for cog every single time without any fuss. Shifting from neutral to first gear does create a loud clanking sound though, but it’s nothing that Harley-Davidson riders are not accustomed to hearing. 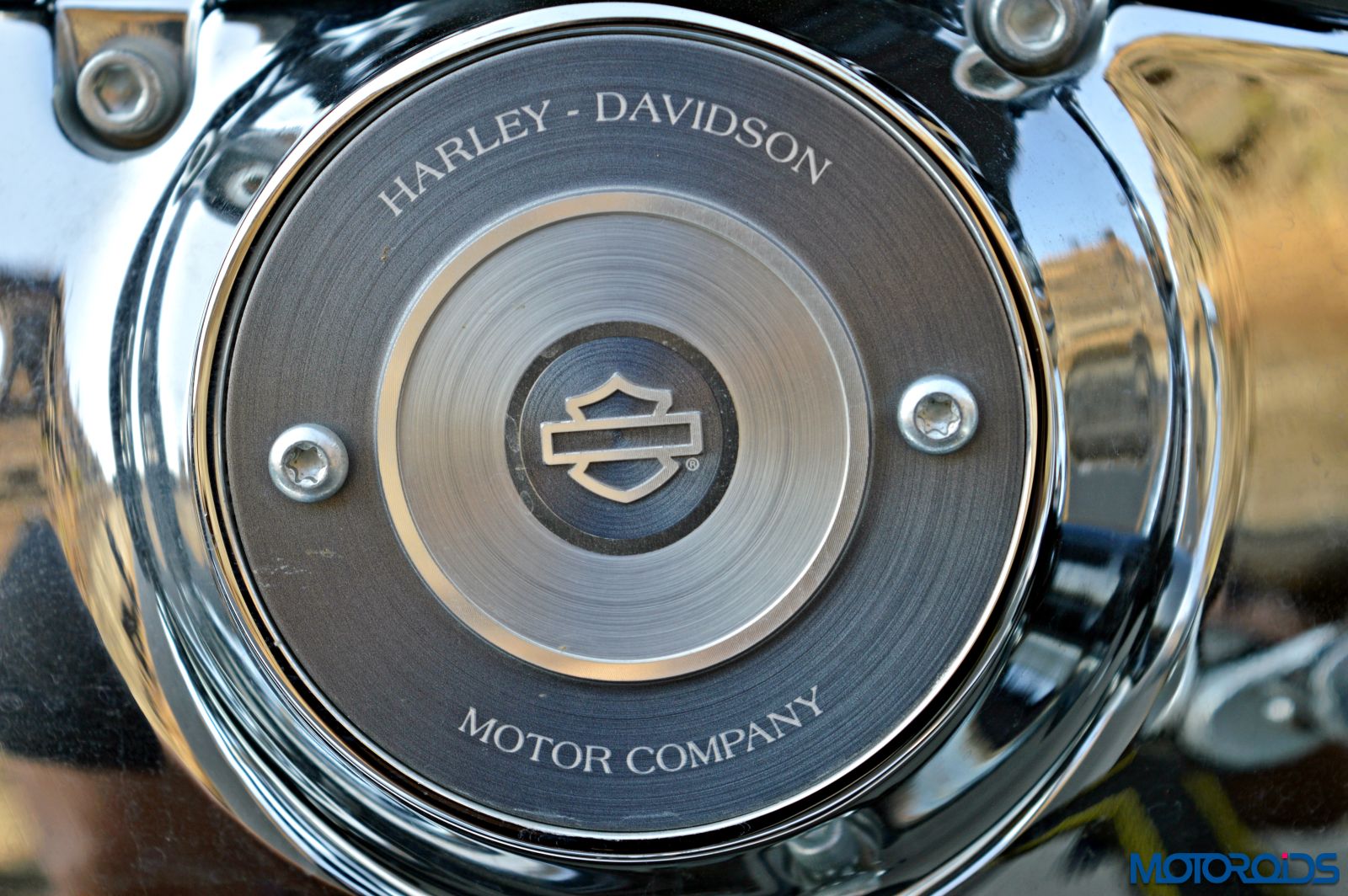 Anchoring duties are performed by a single disc up front and a smaller disc at the rear, both equipped with dual-pistons. ABS, however, is currently not on the list, even as an option, but it will not be long before the norms mandate the installation of the safety net. The overall braking setup is satisfactory with just the right amount of bite and progression while the Michelin rubber further aids the anchoring process at both ends.

The 1202 cc Air-cooled, Evolution engine is a gem of a motor. Like typical higher displacement motorcycles, the 1200 Custom heats up a fair bit though and you really do not want to be stuck in traffic on this motorcycle. 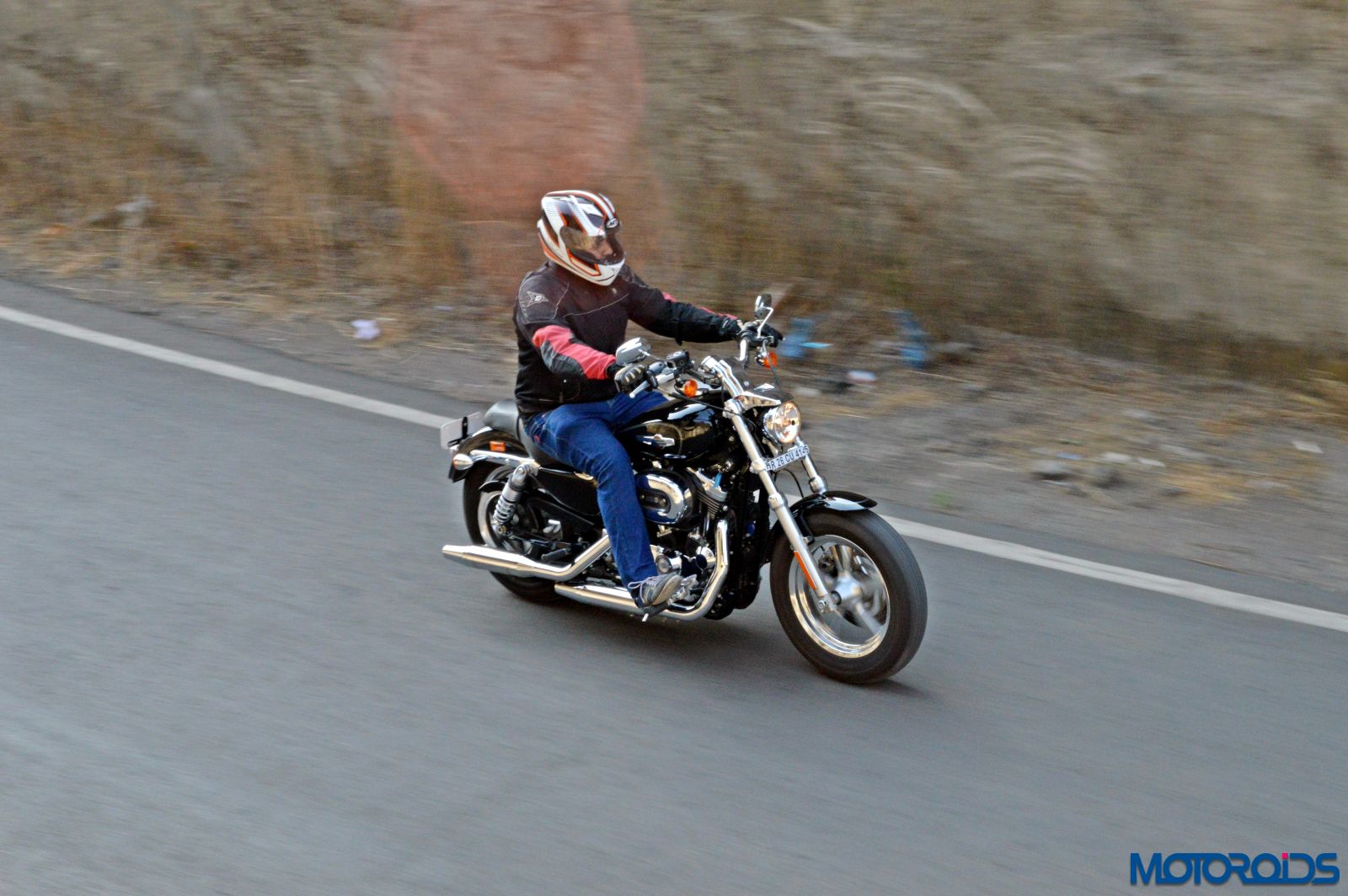 Ergonomics are identical to the Sportster family with front set footrests and pullback handlebar. The setup dishes out a laid back ride experience while still being sporty enough for you to push it around the corners in a reasonably aggressive manner. The capable chassis on the Sportster lends itself for reasonable amount of frolic around the bends, though your angle of lean would be restricted with those forward set footrests kissing terra firma pretty early.

The well-padded seat is a blessing, but the suspension feels slightly on the stiffer side so uneven surfaces aren’t dealt with as adroitly as one would prefer, though there is scope to loosen things down a bit using the adjustability of the rear springs. Going over speed-bumps, especially the taller-than-usual ones was another task as the 105 mm ground clearance would see the metal plate below the engine getting scraped quite often, requiring you to slow down more often and be more careful than you’d ideally desire. 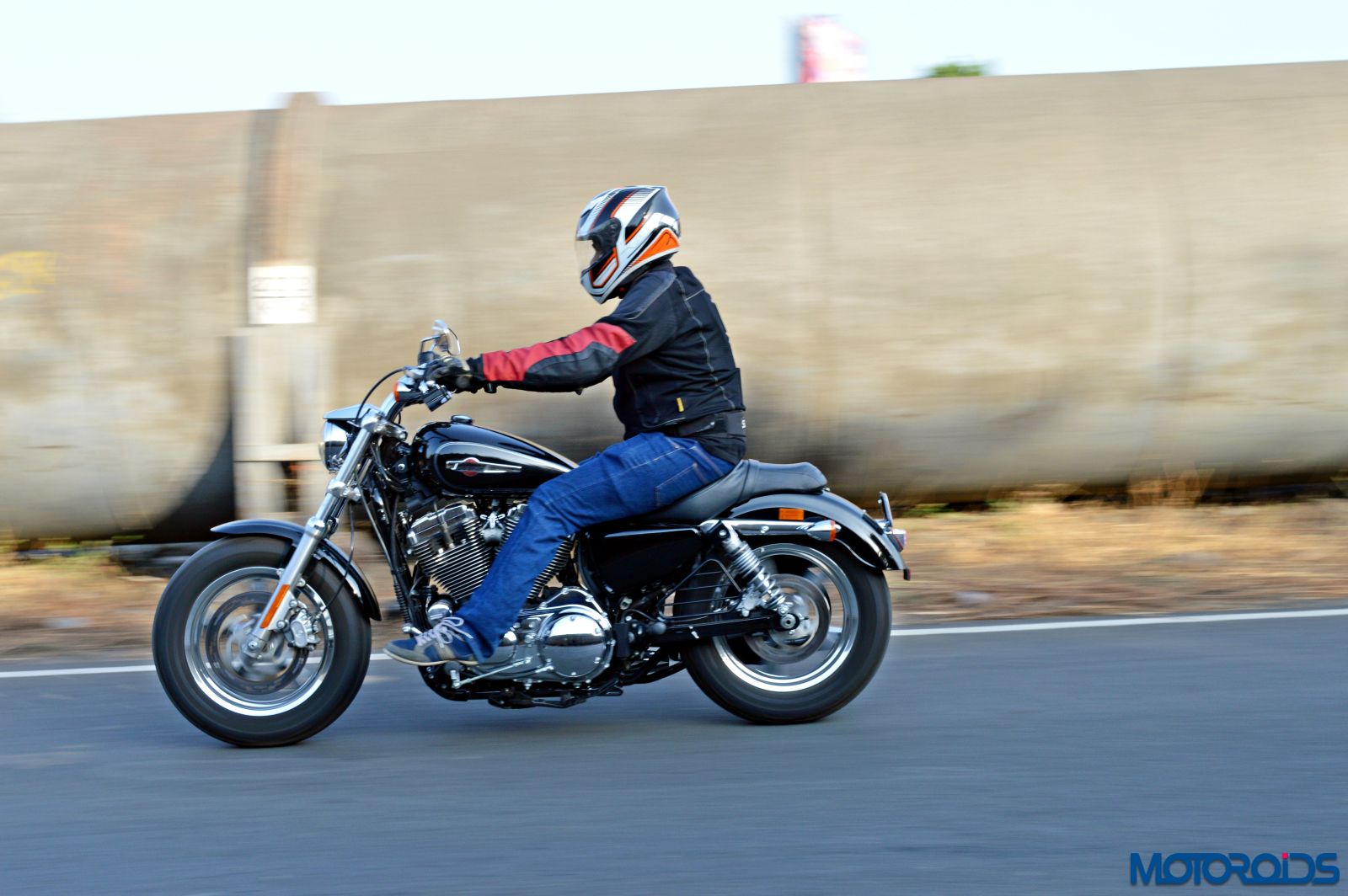 The Harley-Davidson 1200 Custom is a nicely balanced, do-it-all sort of a motorcycle, which is priced very well and styled nicely to appeal to a wide majority of Harley fans. It doesn’t have the sheer proportions you generally associate with some Harleys, but it gets a nimble set of wheels in the trade-off. Also, while it isn’t really a full blown Harley in terms of size, it isn’t the inconspicuous cruiser that the Street 750 is either. The build quality, fit and finish is commendable too and so is that surprisingly spirited engine. 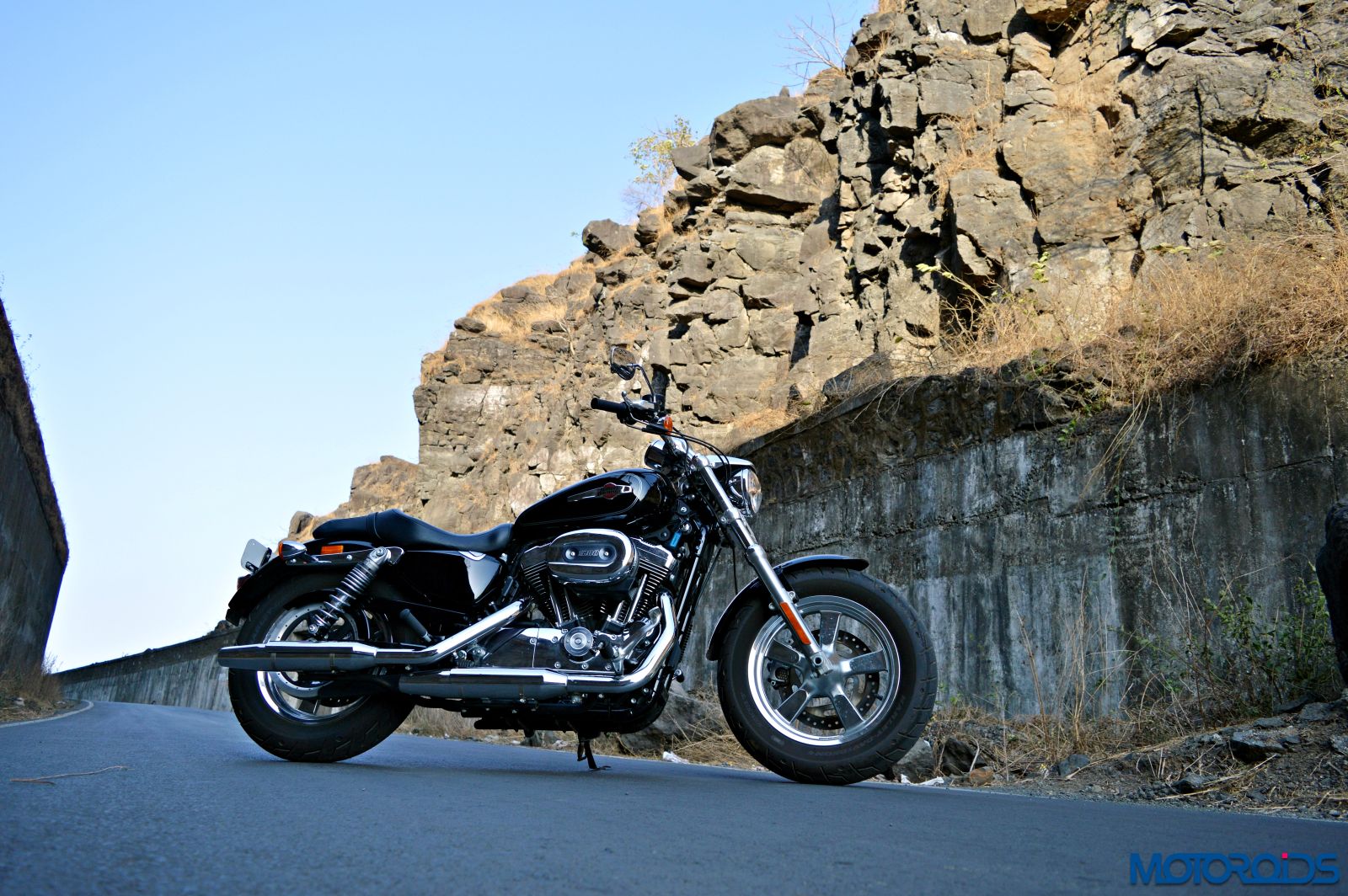 At an ex-showroom price tag of Rs 9.10 lakh, the 1200 Custom comes across as a whole shipload of extra motorcycle over the entry level Street 750. The 1200 Custom, in terms of its size and other details is a much truer representation of what a Harley-Davidson motorcycle stands for as compared to the smaller Street 750, or even the Iron 883. It’s great fun to ride, too, and with that humongous fuel tank, can turn into a capable tourer if you so wish. For those looking to buy a ‘True Harley’ for a snipped price tag, the new 1200 Custom should come across as a fantastic option.

Here are some more images of the Harley-Davidson 1200 Custom along with the official technical specifications. Do let us know your views about the motorcycle and the feedback about the review through the comments section below: