Bus drivers in India are often on a death wish and the way they drive, makes you think if the reason to drive like that is for kicks, at the cost of a lot of other lives or to maintain schedule, which strangely doesn’t happen even after such a death defying drive. Sometimes it’s not the driver, but the road which has unmarked hazards and the vehicle design that causes incidents.

52 People died last year as a result of accidents which caused Volvo buses to catch fire. The government studied these incidents and may issue directives to Bus makers, asking them to move the fuel tank in the middle, so that it isn’t amongst the first point of contacts during a mishap. The directive will also include a recommendation to make emergency exits more accessible. 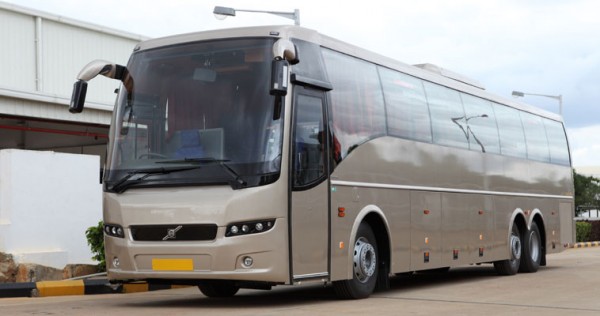 The recommendations for change in bus designs has been given by a high-level panel probing two accidents involving Volvo buses last year.

“Bus manufacturers should be advised to look into having fuel tanks only towards the centre of the bus and not on the sides. This would ensure that they are not exposed to impact,” Transport Ministry-appointed National Automotive Testing and R&D Infrastructure Project (NATRIP) panel has recommended after probing the accidents.

In the first accident at Mahbubnagar in Andhra Pradesh on October 30, 2013, 45 passengers were charred to death as a Volvo bus burst into flames after its fuel tank caught fire as the Hyderabad-bound bus from Bangalore hit against a culvert. The entire bus was engulfed in flames in a matter of minutes.

In the second incident on November 14 last year, seven passengers were killed and 40 injured when a Mumbai-bound bus from Bangalore caught fire after hitting a road median at Haveri in Karnataka.

The NATRIP has also said, “Proper signage should exist on the highway. Features such as narrowing of lanes and presence of culverts as well as other features such as turns, rough roads, merges and exits should be properly highlighted.”

Besides, it advised, “There should be no gaps in crash barriers. Culverts should not have an exposed edge and should be designed properly.”

Meanwhile, based on the inquiry report, Road Transport and Highways (RTH) Ministry has asked research bodies to examine the proposals.

“Automotive Research Association of India (ARAI) and Central Institute of Road Transport (CIRT) have been requested to minutely examine the provisions relating to emergency exit” besides other recommendations for the change in designs, an official document of the Road Transport and Highways Ministry said.

Last year a parliamentary panel, too, had sought a report from the Ministry on the Volvo bus accidents.

“Are there something in Indian conditions that Volvo has not taken into account or is there something wrong in the manner in which our people are operating these buses? These have to be seriously considered. The committee will enquire into it,” Sitram Yechury, Chairman of the Standing Committee on Transport, Tourism and Culture, had said.