Home News Get a chance on FB to star with Ranbir, courtesy Nissan! 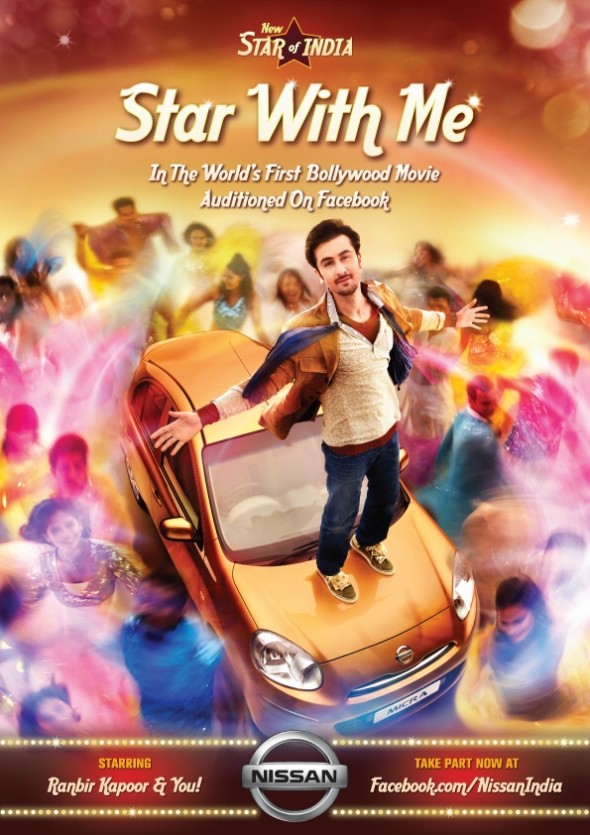 In a unique marketing strategy, Nissan and Ranbir Kapoor are searching for 20 actors to be cast in a film alongside the Bollywood star. This would be the world’s first Bollywood movie auditioned entirely on Facebook. The talent hunt is christened ‘Nissan Star of India’

Auditions begin October 19th on Facebook where movie-fans will be able to join the on-line talent hunts by uploading a short clip of themselves dancing for a chance to appear alongside Ranbir in the 3-minute Bollywood blockbuster – New Star of India.

Members of the public will vote to decide who the 20 lucky Ranbir co-stars will be, and will also help produce the movie by shaping the plot, choosing the music, picking the wardrobe and naming the characters.

As well as being screened to millions on Facebook, New Star of India will be premiered at exclusive red carpet events in cities across India in January 2012, where there will also be a chance to win one of six all-new Nissan Micras.

Ranbir said: “I’m incredibly excited to be involved in this ground-breaking movie with Nissan – no-one’s attempted anything like it before”.

“Speaking to all Bollywood fans out there, this is your once in a lifetime opportunity to join me in the magic of the movies. I’m looking forward to seeing your auditions and can’t wait to meet my co-stars, so get dancing, get voting and get involved!”

All would-be stars have to do is record a 45-second audition of themselves via their webcam, smartphone or video camera showing off their best Bollywood moves and upload it to the dedicated New Star of India page on Facebook ¬– www.facebook.com/nissanindia.

There are just three steps to stardom…
1: Choose your favourite soundtrack on the Facebook page
2: Get dancing – either solo or with up to nine friends
3: Upload the clip to the site and wait for the votes to pour in.

Nissan will also be taking New Star of India on the road and will be touring shopping malls across the country to film live auditions in Mumbai, Delhi, Bangalore, Chandigarh, Kolkotta, Pune, Ahmedabad, Hyderabad & Aurangabad from October 22nd – check the Facebook page for details.

Even non-dancers can get involved. Everyone who votes, shares or takes a test drive from Nissan’s model range will be entered into a competition to win a chance to attend one of the movie premieres and win a Nissan Micra.

Kiminobu Tokuyama, Managing Director of Nissan Motor India Pvt. Ltd said: “Nissan is all about innovation. It’s in the cars we build, the way we do business, the way we communicate and now we are offering members of the public a genuine world’s first – an opportunity to become a Bollywood star”.