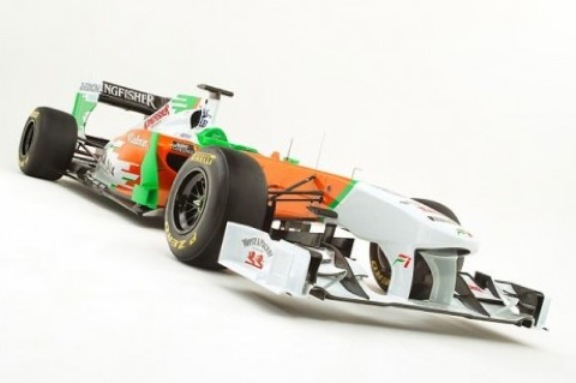 Force India have unveiled their F1 racing car for the 2011 season. Named after India’s liquor baron and Force India team owner Dr Vijay Mallya, as VJM004 the new car is painted in Indian flag’s colors. For 2011, FIA Technical Regulations, with a cut in downforce, KERS and the movable rear wing chief among themhas made the new car very different from its predecessor.
‘We’ve recovered a lot of the aerodynamic performance, we believe. The movable wing is a whole new game, and we’ll be trying to exploit its performance to the max. We’ve also put in a lot of work trying to maximise the potential performance of the new Pirelli tyre compounds. Exhaust management will also be a big area of development this year.  There will be an upgrade for the first race, so there are some changes that will come into effect at the Bahrain test. Further down the line there are some big updates for the front of the car coming in for the first European race’ says team’s technical director Andrew Green

Force India is not entirely new to KERS either. The 2009 car was designed to utilise the Mercedes system and the team ran it in testing, although it was never raced.

Commenting on the new KERS system, Green syas ‘The Mercedes KERS system looks very strong, and we’re really happy with it. We’ve done a lot of running in the simulator, so the drivers are well up to speed with how to use it. We’re well developed with what we have to do for harvesting and deployment. It’s smaller and lighter than in 2009, and packaging required very few vehicle compromises.’

‘There are some big developments in the pipeline, probably bigger than this team has seen for quite a while. I think we’re looking for a much stronger finish to the season, and we do recognise the fact that there’s an Indian GP on the calendar, and we are an Indian team. The plan is to be putting stronger performance on the car through the year that will lift us up the ranks.’