As can be made out in these images, the dashboard gets new aircon vents and a new color scheme for the instrument console. The new dashboard sports a redesigned centre stack which seems to have got a new interface for the audio system. The car could have also got an upholstery change, with richer materials put into use.

The 2013 Linea facelift is already on sale in many European markets and the updated car could be launched in India at the advent of festive season.

The Fiat Linea facelift boasts of a revised front fascia which consists of a new bumper, grille and a lip spoiler. Also, the car gets a new rear bumper and revised taillights. With the advent of the Linea facelift, designers at Fiat have done away with the Audi-ish ‘Bulgarian beard’ and the C segment sedan now gets a new front grille that reminds us of the one on the last gen Hyundai Accent/Verna. 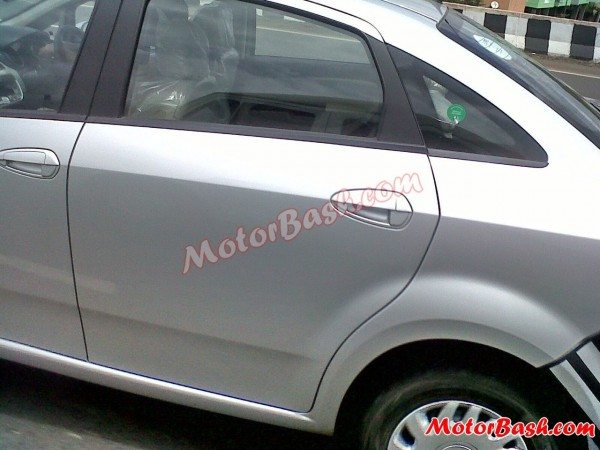 It is being said that the Linea facelift will bring along with it a 1.6 litres Multijet diesel engine. The other engine option on offer would be the 1.4 litres turbocharged petrol motor that powers the Linea T-JET.

The Linea has never been very successful in taking the upper C segment of Indian car market by storm and has suffered mainly due to poor after sales support being was provided by the Tata-Fiat venture. However, with Fiat India having done away with the Tata link and taken steps to improve its network, the Linea facelift could have a better fate than the pre-facelift model.

Go to next page for more spy pics