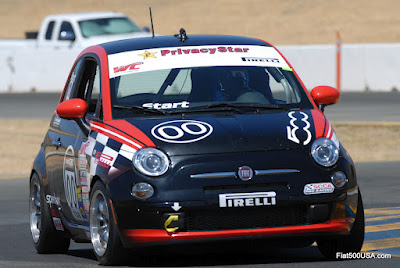 Fiat driver Jonathan Start is the 2012 Pirelli World Challenge Touring Car B-spec series champion, wrapping up the title in his No. 00 Fiat 500 at the season finale at Sonoma Raceway this past weekend.

“Congratulations to Jonathan and his team for capturing the inaugural World Challenge Touring Car B-spec series championship,” said Tim Kuniskis, Head of the FIAT Brand for North America, Chrysler Group LLC. “We’re proud to see that their hard work paid off and that the solid engineering behind our Cinquecento is not only able to successfully compete in Europe, but also to win titles in America.”

Start was excited with his championship win, but it didn’t come easy.

“We kept our Fiat 500 clean and did what we needed to do to claim the championship,” Start said. “With all the tight turns, elevation changes and slow corners here at Sonoma, it was another learning experience for us. We gained a lot of knowledge this weekend that we’ll carry on to next year.”

In April, Start got the inaugural season of Touring Car B-spec competition off to a fast start by posting back-to-back wins at Miller Motorsports Park in Utah and followed up with a fourth the next day. The series traveled across the border in June to Canada (Canadian Tire Motorsports Park, formerly Mosport) for the second event weekend where Start posted three third-place finishes.

“We started the season strong,” said the rookie Michigan native. “The Fiat 500 was ready to race. Getting those wins and that fast start carried us through the whole year. Sonoma didn’t go exactly as we had planned but it was a strong points weekend. It was the same throughout the year, we were consistent.”

Modifications for racing in the series are limited to shocks, springs and the required safety equipment.

“It’s been a great first year for the Fiat program,” said SRT Road Racing Manager Gary Johnson. “Jonathan deserves a lot of credit for bringing home the championship. His fast start with two wins in the season opener and three third-place finishes at Mosport were critical. Jonathan drove smart all year and focused on the title rather than individual race wins. It takes a real professional to look long term, race clean and finish every race.”