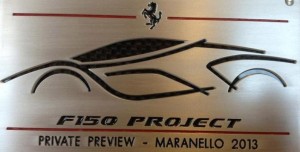 The Ferrari F150 refuses to go out of limelight. After a thousand spy pics and a handful of teasers, it has now emerged that Ferrari has started holding private presentations for the F150/F70 supercar.

The supercar tips the scale at 1,270 kg and has a 0-100 kmph timing of 3 seconds. The car has a top whack of 370 kmph. F1 driver Fernando Alonso tested the new Ferrari on the Fiorano circuit and registered an impressive lap time of 1.20 minutes. It is being estimated that the car is quick enough to have a lap time of less than 7 seconds on the holy ring.

The F150 will make its public debut at the Geneva Motor Show in March and only 499 of this car will be ever made.