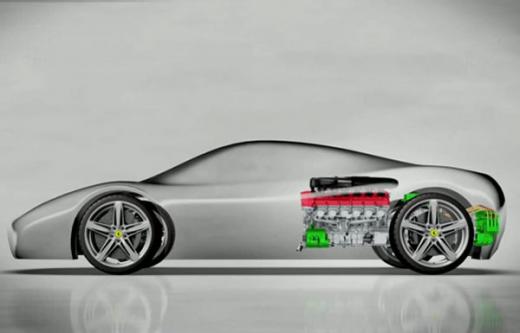 Motoroids was one of the first to report about the Italian automaker Ferrari’s plans to develop a successor to the mighty Enzo supercar. Now, the latest is that the manufacturer has announced the details of the new car’s powertrain. As we mentioned earlier, the car will use a hybrid system and the performance car manufacturer announced the details at the ongoing Beijing Motor Show.

As our sources had informed us, the new car will use a V12 motor and two electric motors. The F70, as the successor is being officially called, will be “filled” with state of the art technology, in the words of Amedeo Felisa, President at Ferrari. The powerhouse will be mated to a double-clutch transmission system. While one of the two electric motors find a place in front of the V12, the other will be placed between the engine and the transmission.

Our sources had told us that the F70 will come with a gigantic 7.3 liter V12 engine that will be based on the 620 GT (F620) motor. The F70 will also sport the KERS (Kinetic Energy Recovery System) as seen on Formula 1 cars. This also means that the car will get an extra 120 HP.

It is being said that the Ferrari F70 will tip the scales at a light 1,134 kg (2,500 lbs) and that simply means the car will be smoking a lot very hyper cars.