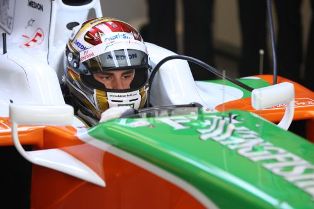 Force India Formula1 team; don’t they just seem to amaze the F1 audience? After a lackluster qualifying session yesterday (they finished 12th and 13th) the team scored yet another points finish with German driver Adrian Sutil finishing the European GP in Valencia in 6th place. The Force India driver enroute to 6th beat the Mercedes GP and Ferrari cars.
The European GP in Valencia saw Red Bull Racer Sebastian Vettel take victory followed by the Mclarens of Lewis Hamilton and Jenson Button. The drive of the race was BMW-Sauber-Ferrari’s Kamui Kobayashi who finished 7th – ahead of local hero and Ferrari racer Fernando Alonso.
In my pre-race analysis, I had predicted a tough battle between the Force India and Mercedes GP cars. The battle of course wouldn’t be for the top step of the podium, but for a place in the top 10. The leaderboard of the European GP clearly tells us that the Force India F1 team won the fight on and off track!
On-track, the drivers made a good start and drove at a consistent pace till of course the Safety Car period. However, their start was noteworthy, where they beat Nico Rosberg to the line, but lost positions to Michael Schumacher.
However, the Force India team reacted better under the Safety Car period, by deciding to call both their drivers in to pit on the same lap. While this meant that Vitantonio Luizzi had to wait in queue till Sutil’s tyre’s were changed, their decision in hindsight was a better one. Mercedes GP one the other hand had already changed Nico Rosberg’s tyres before the Safety Car period. However, by the time they decided to call in Schumacher for his tyre-stop, it was a little too late.
Schumacher exited the pits to join the race dead last (just ahead of the new comer teams) and was unable to make ground thereafter. Though the Mercedes GP pitwall (and I) thought that they pulled off a smart one by making Schumacher pit again within two laps of driving on the soft compounds, it was not meant to be. Schumacher’s strategy would’ve worked only on two counts: a) had there been yet another Safety Car period; b) had the other drivers decided to make yet another tyre stop. However, none of the two possibilities occurred and Schumacher in 16th position decided to use the rest of the European GP as a test session!
The Force India F1 team however got their tyre and pit strategy right. Some quick thinking under the Safety Car period ensured that atleast one of their drivers made it into the points. While Sutil scored points by finishing 6th, Luizzi had a good race that led to a non-points scoring finish in 13th.
The icing on the cake here was: a) Force India F1 team gained 8 points on the Mercedes GP team on the F1 Constructor’s table; b) Adrian Sutil too gained 8 points on Michael Schumacher who is currently 9th on the F1 Driver’s table. If the results stay as-is, Sutil will leapfrog the 7 times World Champion in the Driver’s Championship table. A good weekend overall for the Force India team.