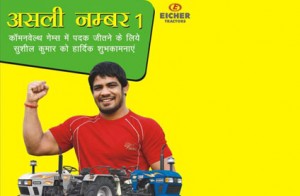 TAFE Motors and Tractors Limited ( TMTL) promoted  a massive 1,415 feet-long banner campaign by Eicher Tractors with Good Luck wishes to Olympian Sushil Kumar prior to his London feat has made it to the Limca Book of records. Eicher Tractors (TMTL) is a subsidiary of world’s third largest tractor manufacturer, TAFE.

A certificate from Limca notes that the “Vijaya Bhava” Eicher Tractors campaign was organized from June 21 to July 16, 2012. The organizers made a 1,415 ft long and 4ft 4 inch wide, working out to 5,660 sq ft, flex graffiti roll in a custom made van to associate with the popular Eicher Tractors Model 5660 that Sushil endorses.

As many as 7,000 well wishers participated in the campaign as the specially designed van travelled to 105 locations, covering 2,400 KM in Haryana.

Acknowledging the National Record certificate from Limca, Ms.Mallika Srinivasan, Chairman & CEO of TAFE, said: “It is a matter of pride to the nation and us that Sushil Kumar has won Olympic laurels for the second time. Both Sushil and the Eicher brand have consistently delivered on the well known brand promise of Ummeed se Zyada.”