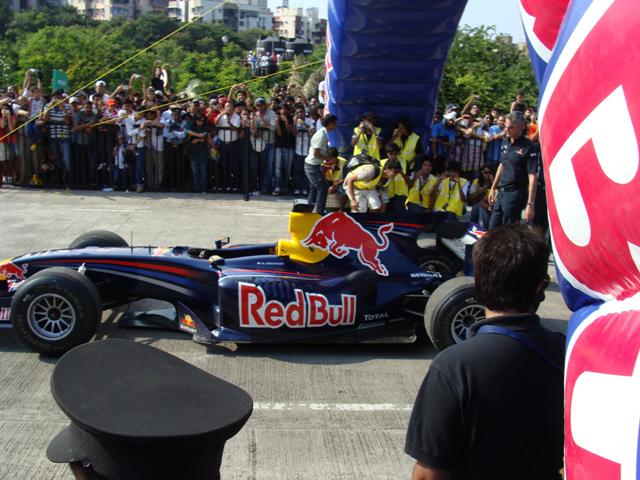 David Coulthard set the Bandra Worli Sea Link on fire with a top speed of almost 260 kmph in his F1 car yesterday evening. Hundreds of F1 fans got the first hand experience of seeing the Red Bull racing car zoom across at an amazing speed at a distance of hardly 15 to 20 feet.

After the drive, Coulthard announced to his fans, “I have been driving over 200 kmph all my life. It is difficult to keep my speed below 100 kmph.”

Red Bull decided to give Mumbai “wings” with a display of former F1 champion and Red Bull Team racer David Coulthard driving his Formula One Car at a zooming speed across the newly constructed Bandra Worli Sea Link. A distance of more than about 5.6 kms was to be covered by Coulthard in front of his diehard fans in Mumbai. DC not only did a quick run through the sea link, but also made a few donuts to excite the audience. More than a few hundreds of Formula One and Coulthard fans had gathered well before the decided time of 2:00 P.M. in the afternoon to witness this rare event happening right in front of their eyes.

The deafening roar of the car left the audience amazed and dumbstruck. The security had a tough time controlling the excited crowd so as to prevent any mishap on the course of the power packed machine. The drive started at around 3:00 P.M. in the afternoon instead of the scheduled time of 2:00 P.M. and lasted for a mere few seconds. To impress his fans, David performed two doughnuts, one on the sea link itself and the latter on Bandra Reclamation. After the drive David was escorted on a customized car by Red Bull so that he could have a word with his Indian fans. He was taken across the Bandra Reclamation with an Indian National flag clenched in his hands. The Red Bull Racing Team Crew Displayed the cart to the excited crowd. A mind blowing experience it was for all those present there. But a disappointment for all those who missed it as the following were his words a day before. 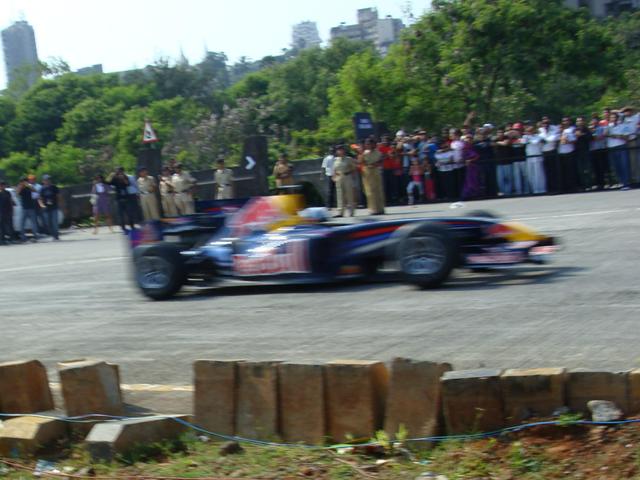 “Apparently there is a speed-limit of about 50 or 100 kmph. But I do not intend to drive in India again. So instead I plan to go flat out.”

As per our sources, the organizers if the show will be denied the deposit of Rs. 14 lakhs with the State Governments as a penalty for breaking the speed limit even though no damage was caused.

“You already have your own F1 team. I would be happy if you would have your own F1 circuit and can’t see why you can’t have a F1 world champion in the near future,” were Coulthard’s inspiring words for India. 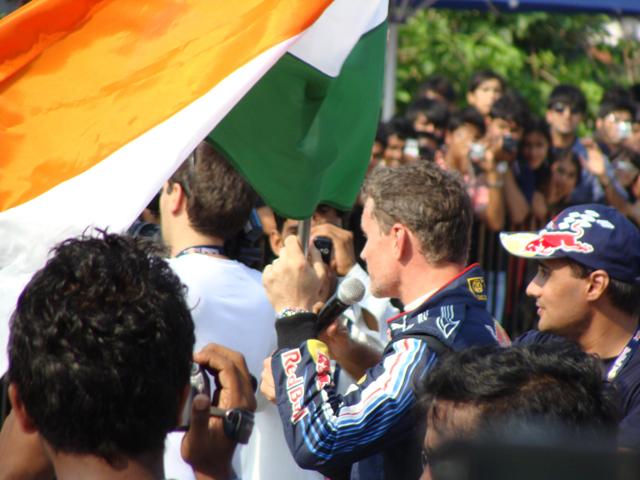