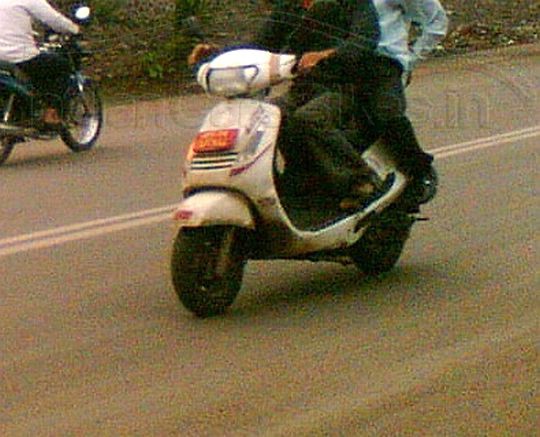 Some time ago, India’s popular scooter brand-Kinetic- was sold to a manufacturer that was then known to build heavy duty SUVs and tractors. Kinetic became Mahindra 2 wheelers and that saw introduction of a few scooters that are still not spotted very frequently on our roads. What with Honda conquering it all with it’s competent offerings. Remember the Mahindra Duro? It has a body kit that is reminiscent of the Kinetic Nova and the 125cc motor is sourced from the Sym. To us,  the then Mahindra Duro seemed to be a worthy claimant to the best VFM tag in its category. Sadly for Mahindra, the Duro doesn’t seem to have what it might take to dethrone the almighty Hondas.
We have concrete information that Mahindra Two Wheelers will launch the facelifted version of the Mahindra Duro Powerscooter as early as in December this year.

From what we have managed to figure out from the spy pics surfacing on the internet, there are a few minor changes that have been made by Mahindra to make the Duro have more visual appeal. The scooter has a curvier headlamp unit that manages to gel with otherwise quite a boxy design and gives the scooter a bit more upmarket look. The headlamp unit seems to be a bit of an evolution of the sister Rodeo’s unit.

On probing more into the pictures, we spotted a major change that may make the scooter ride much better than it presently does.  Mahindra has finally gone for a set of new telescopic front shocks that replace the earlier unit link suspension. This simply means that the Duro will join the likes of the competent Suzuki Access 125 and the TVS Wego in offering a much needed and contemporary suspension set-up. We feel that all the automatics in this segment should boast of a set of telescopic shocks. Come to think of it, even the entry level TVS Scooty Pep+ sports these and as a result it makes me speak highly of its handling and ride.

The Mahindra Duro should soldier on with the 125cc four stroke engine that produces 8 Bhp of peak power and 9 Nm of peak torque. This may not sound much to us performance enthusiasts but it should be noted that this engine is also one of the more powerful units in its class.

Now, the question is if a mid life update can really make the Duro click and if it will attain the popularity Mahindra 2 wheelers wish it to attain. I personally feel that these little changes should had happened a lot earlier but then, it is never too late.

Watch this space for a complete review of the updated Mahindra Duro.