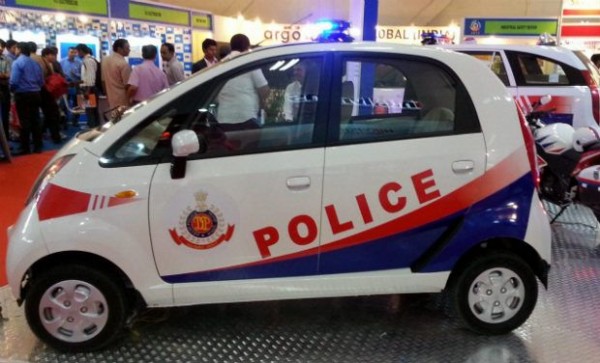 The Tata Nano, draped in Delhi Police livery, that you see here in the pic above is a concept that has been showcased at the ongoing India International Security Expo, which is being held in Pragati Maidan, New Delhi.

This Tata Nano variant has been developed by a security firm which goes by the name ‘Grand’. Those who have an eye for detail would have noticed that the Grand supplies red and blue beacons to government vehicles. Grand goes on to say that the Nano PCR, thank to the light controls and small dimensions, can also be used by lady police drivers. We feel that this claim is definitely a tad sexist but not completely illogical.

Monty Singh of Grand security firm says that this Nano could become a competent Emergency Response vehicle. This is what he said-“We have just launched a concept of using the small car for emergency response instead of the big PCR vehicles being used at present by Delhi Police. We would want the police and other agencies tasked for exigency duties to have a look and see if this fits their bill.”

Mr. Anil Goswami said that he would ask high officials of Police forces to have a look at this Nano and see if could be inducted into the force.

You say, would you want this car to make it to Delhi Police? Let us know by commenting below.