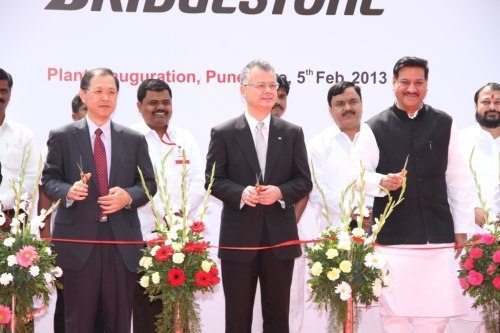 The chief guest for the occasion was Shri. Prithviraj Chavan, Honorable Chief Minister of Maharashtra. He along with Mr. Kazuhisa Nishigai, COO and Representative Board Member, Bridgestone Corporation and Mr Kiyoshi Asako, Consul General of Japan in Mumbai inaugurated the plant which is an outcome of an MOU signed between Bridgestone India Pvt. Ltd. and Government of Maharashtra in April 2010 for an estimated investment of Rs 2600 Cr.

The plant is spread across an area of approximately 187 acres of land. When all the phases of expansion are complete the plant will have a capacity to manufacture around 10,000 Passenger Car Radial tyres and 3000 Truck Bus Radial Tyres per day that will cater to the growing needs of the Indian market. It will generate an employment to approximately 1800 people.

Talking to the media, Mr. Kazuhisa Nishigai, COO and Representative Board Member, Bridgestone Corporation, expressed his deep delight and said that “India is growing rapidly and it will surely continue further in the future, and has an unlimited potential. The success in India is essential and inevitable for Bridgestone to be the undisputed No. 1 Tyre and Rubber Company in the world both in name and reality.”

Bridgestone India established its first plant in India in Kheda, MP which started the production in 1998 and within a short span of 14 years became one of the leading tyre companies in both the OEM & Replacement market, with 2500 dealership network across the nation.