Home BMW BMW Commences Deliveries of the i3 Electric Car

BMW has commenced the deliveries of their first electric car, i3. The car was recently delivered to some first German customers.

At a special ceremony held at BMW Welt, BMW Board Member Ian Robertson presented keys to some customers, including the Bavarian State Chancellor’s Office Head and State Minister for Federal Affairs and Special Tasks, Christine Haderthauer. 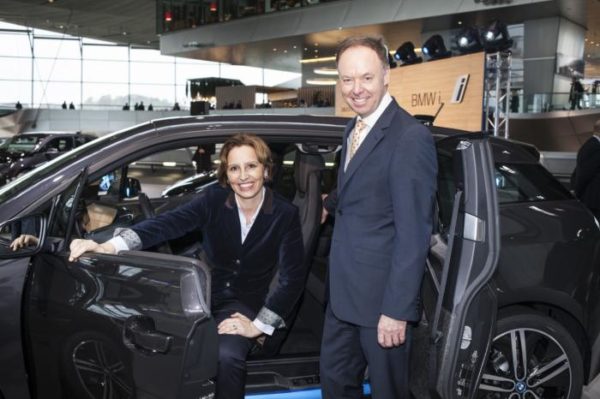 In his speech, BMW Board Member Mr Robertson said “Today marks a milestone in the history of the BMW Group, as we hand over our first BMW i premium electric vehicle to customers. In doing so, we are bringing sustainable mobility to the roads.”

The BMW i3 electric car uses lithium-ion battery and offers a driving range of 130-160 km on a single charge, with an acceleration figure of 0-100 kmph in just 7.2 seconds. A 22 kWh lithium-ion battery which consists of eight modules, each having 12 cells, powers an electric motor which pumps out a healthy 170 HP of max power and 250 NM of torque. The car has a top whack of a respectable 150 kmph.

The i3 uses the first-ever mass produced Carbon Fiber Reinforced Plastic (CFRP) passenger cell in the automotive business, and the  base  is made entirely of aluminium and contains the battery pack in the floor area.

Also, the second electric car from BMW, the i8, will be making its debut in early 2014.

The i3 retails at a price tag of approx 35,000 Euros and the battery comes with an eight-year 100,000 mile warranty as standard.

Stay tuned to Motoroids for more dope on the 2014 BMW i3 electric car.