TVS Motors are recently putting full efforts in going big. After collaborating with BMW bike division for mutual exchange of technologies, they are also leaving no stone unturned in the area of marketing. TVS motors has really come a far way after parting ways with Suzuki and are now improving rapidly. 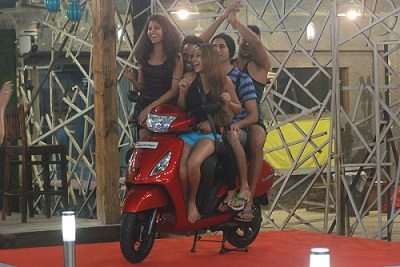 TVS recently launched their new automatic scooter, the TVS Jupiter, last month. TVS chose the BIG BOSS reality show as a platform to showcase the bike and its features, along with the usual commercial film. A task was given to the BIG BOSS show inmates named-Zyada Ka Fayda, in which the team had to somehow accomodate themselves on the TVS Jupiter scooter. In this task, the Jahannum-wasis won, and they got a gift hamper to be shared brtween them. Also, the big moment for the winning inmates was when BIG BOSS anoounced that, the winning team members will receive a TVS Jupiter scooter each. The inmates were overjoyed on the announcement and inmate Elli Avram gifted the scooter to her dad who recently celebrated his birthday. 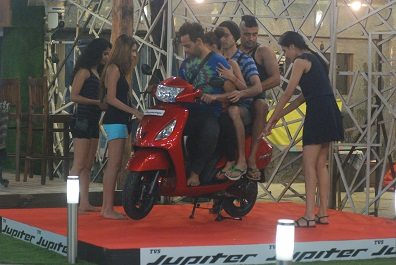 Regulars here would be knowing that we have reported extensively about the Jupiter, which is an automatic scooter with a 110cc CVTi engine producing 8bhp at  7500 RPM. Several category first, unique features have been incorporated in TVS Jupiter. For the first time in the scooter segment, TVS Jupiter will come with a pass-by switch, which enables safety and ease of riding on highways. Other features which have been inspired from motorcycle, include telescopic front shock absorbs and rear gas charged suspensions for supreme ride comfort for both rider and pillion. TVS Jupiter also features  a low fuel indicator. 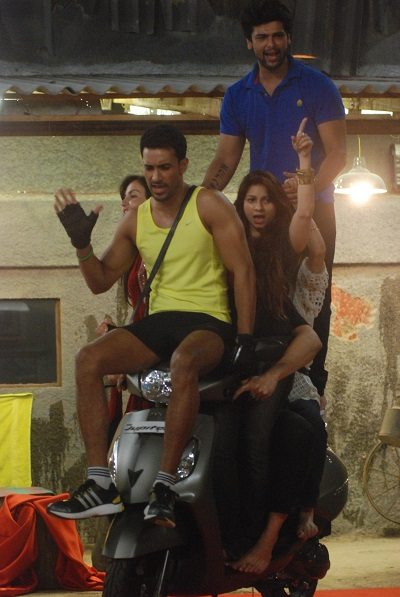 TVS Jupiter is available with unique twin city lamps, and stylish LED tail lamps which save electrical load on the engine, thus providing better fuel efficiency apart from high visibility. A large wheelbase of 1275 mm makes it one of the most stable scooters in its class with a remarkable turning radius of 1910 mm, amongst the shortest in its class.

TVS claims a fuel efficiency figure of 62 kpml for the Jupiter.